A decision to build to Passivhaus standards proved a steep learning curve for Stoneham Construction, but the move has paid dividends 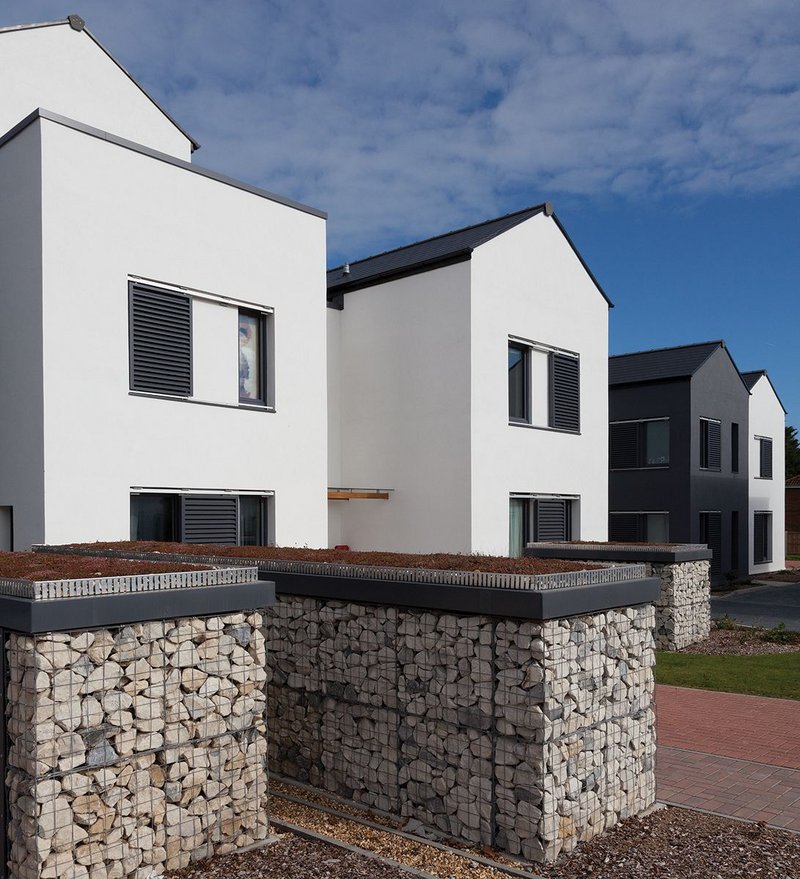 The 28-home project on the Isle of Wight is one of the first developed by a housing association to Passivhaus standards.

A bit of a leap into the unknown. That’s how Stoneham Construction site manager, Nigel Meaden, describes his company’s work on 28 Passivhaus units for registered social landlord, Southern Housing Group.

Meaden hadn’t heard of the stringent Teutonic standard before starting on the £4.2m Isle of Wight project and nor had his employer built to that standard before.

In fact, the idea of building to Passivhaus levels emerged from a desire to attain the higher reaches of the Code for Sustainable Homes without resort to micro-renewable bling. The resulting strategy included aircrete blocks with Thin-Joint cement to ensure airtightness. But first the team had to get up to speed on Passivhaus.

To reach certification, Passivhaus buildings must be below or equal to 0.6 air changes per hour at 50Pa. Elements including doors and windows have to be approved by the Passivhaus Institute in Darmstadt, Germany. Energy for heating and cooling has to be near zero and mechanical heat ventilation and recovery is usually required.

On top of this, additional cost for the project was estimated at 7%, or around £10,000 a dwelling. A grant from the Isle of Wight’s sustainable community strategy provided the extra funding needed to reach the standard.

‘Like others in the industry, the Group was considering how to respond to the zero carbon agenda,’ says Hulmes, ‘So we looked at a fabric-first approach. This wasn’t innovation for innovation’s sake – it was a means to an end.’

By the time Southern made the decision, plans by architect PCKO had been drawn up.

The design was stepped and staggered and set around a courtyard. That meant there were extensive external walls – which it was best to limit in order to achieve Passivhaus.

Andrew Ogorzalek, director of PCKO Architects, says: ‘We spoke to the Passivhaus consultant and decided between us there was no point taking forward the scheme we had.’

The team went back to the drawing board.

To limit the exterior wall a terrace is the best solution for a Passivhaus. However, the 1.5 acre site was bordered by existing buildings to the east and west and playing fields to the north and west.

The homes - which replaced Southern Group sheltered housing - had to maintain an open aspect into the field and trees.

The next-best solution was to create semi-detached homes, with as much attached wall as possible. That resulted in the creation of units that were quite deep, says Ogorzalek.

Karl Parsons, Passivhaus designer at Warm: the low-energy building practice, explains: ‘The semi-detached house is not ideal for Passivhaus [either], but the scheme has a very distinctive aesthetic and that drove us to push what could be achieved in terms of thermal performance. We’ve created a Passivhaus-compliant scheme, but not lost sight of the architect’s vision.’

Houses are two and three storey units ranging from two to five bedrooms. The apartments are all one-bed self-contained units, with the living space incorporating a flexible folding partition to allow for the creation of a temporary guest bedroom for a carer or visitor. The varying sizes of the houses and the flexibility of their plan are designed to encourage a sustainable, cohesive community. Houses have front and back gardens while apartments have landscaped kitchen gardens.

The orientation of the houses is intended to provide a feeling of security while maintaining privacy.

While Passivhaus makes many people think of timber-frame construction, Parsons says block is sometimes more straightforward to get airtight.

So as well as employing the expertise of the Passivhaus designer, the team also had the benefit of the H+H Thin-Joint system.

This uses standardised aircrete blocks (from H+H’s Celcon Plus, Jumbo Blok or MultiPlate ranges) but they need to be cut to 0.5mm tolerances in order to take the special Thin-Joint cement. Stoneham used two specially procured bandsaws as cutting the aircrete by hand would have taken too long.

Blocks were laid by two gangs of four bricklayers working together apace.

Thin-Joint cement has speed on its side. The dry, premixed powder comes in 25kg bags; it is mixed with water and applied with a special scoop to create a joint just 2mm thick.

After mixing, Thin-Joint starts to set within 10 minutes and reaches something like full design strength in one to two hours. Follow-on trades can start work sooner in a weather-proof environment.

David Harris, director of Stoneham Construction, estimates that building with the cement shaved 20% from using the traditional sand/cement mix: ‘The glue goes off more quickly, so you can build a house in two or three days.’

The problem with mortar is that it takes so long to set that as the wall is built up, the mixture at the bottom becomes compressed, ruining the joint.

While the aircrete blocks were standard and the price you would expect, the director thinks the Thin-Joint paste was marginally more expensive than traditional mortar. On the other hand, there was less wastage.

Meanwhile, a Thin-Joint site has less clutter and mess around, with no need for cement mixers, water butts and piles of sand.

And the method is also a better bet for winter. Unlike the traditional 300-year-old mix – which suffers from frost damage when water freezes, destroying its adhesive properties and requiring a total replacement –  Celfix Mortar can be laid at 0° and rising.

Going by the book

As well as investing a little time and effort in understanding the Thin-Joint system, Stoneham bought its own air-testing kit and sent a staff member to be trained in its use. He tested the build almost daily so the team could keep a check on the build process and nip any problems in the bud.

‘He became the Passivhaus champion,’ says Harris. ‘He even had a shirt with Passivhaus Champion printed on it!’

Site manager Meaden was also sent on a Passivhaus training course and he made sure that everyone bought into it at every level.

‘Everyone needed to understand the consequences of their actions,’ says Harris. ‘Everything had to be done by the book, around every window, door and pipe.’

Forward planning was key, particularly for services: ‘You can’t have plumbers just drilling through a wall,’ he adds.

For Southern, the project fulfilled a number of additional landlord-specific objectives: heating costs for a three-bedroom house are expected to be about £900 less than they would be on a comparable building. Homes are heated by a small combi boiler which works alongside mechanical ventilation with heat recovery.

‘We were aware that the Passivhaus route would cost more,’ says Hulmes, ‘but we foresaw benefits internally.’

The hope was that lower running costs will help tenants afford to pay their rent and that they would be happier because their houses were nicer. ‘This would in turn reduce voids for us and the extra capital cost will produce more rental income,’ Hulmes adds.

Overall, he considers the project worthwhile, with the increased attention to detail creating the additional benefit of high quality homes. ‘Consideration has been given to floors and roof details, for example, to avoid cold-bridging,’ he explains.

Even the contractor gives H+H Thin-Joint for Passivhaus the thumbs up.

‘It has been good experience for us and we are looking forward to speaking to occupants in around a year about their energy costs to see whether they have had a good experience of living in the homes,’ says Harris.

‘The bricklayers were apprehensive about the Thin-Joint system at first,’ adds site manager Meaden. ‘But having received all that training and support from H+H’s Graham Keenor and his team, they never looked back.’