A golden hood over the River Aire now beckons commuters to the new southern entrance of Leeds Station and provides a landmark for a fast regenerating area, belying the construction difficulties posed by such a tight site 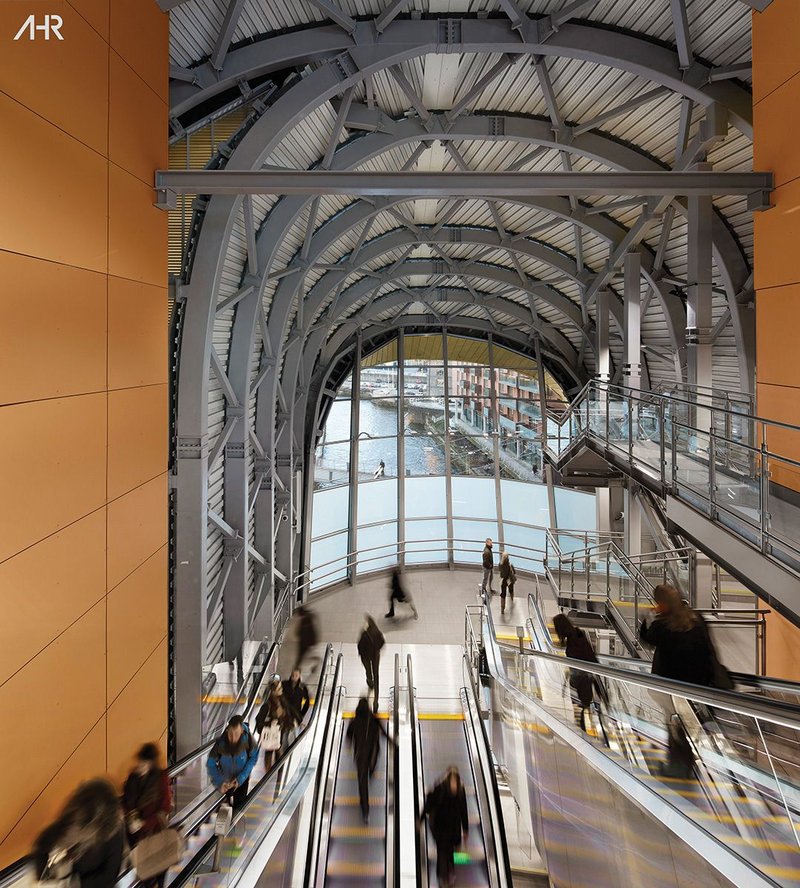 Passengers have views of the exposed diagrid steel structure as well as the River Aire as they travel on the escalators. Credit: AHR/Daniel Hopkinson

Leeds Station’s £20 million new entrance presented multiple special challenges: piling down into the bed of the River Aire, building up over live railway tracks, managing a sensitive interface with a Victorian structure, and negotiating a heavily restricted site which meant building components had to be brought in by barge.

Following a concept design by Bauman Lyons Architects, the project was developed in detail by architect AHR and structural engineer Mott MacDonald with steelwork by William Hare. Clad in golden, anodised aluminium panels, the intervention creates a new city centre landmark as well as serving the fast-regenerating area south of the station.

‘The hope was to create an iconic entrance for the city – something attractive rather than run-of-the-mill,’ says AHR architect Matt Beaumont.

‘It was an extremely challenging project in all senses. Everything had to be fabricated offsite, then sailed up river by barge, and winched into place by a tower crane positioned behind a tall neighbouring building. And it had to be millimetre perfect.’

The only viable location for the new entrance was to build directly over the fast-flowing River Aire alongside the railway viaduct. The new structure contains stairs, lifts and escalators rising 12m to connect to the existing high-level concourse.

A prefabricated steel structure was judged the best and most practical way of realising the entrance’s distinctive hooded form while limiting onsite construction. 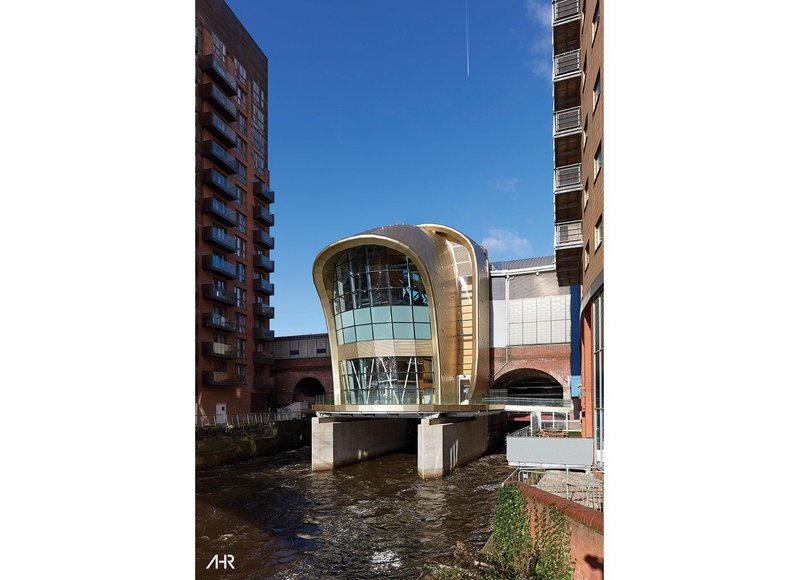 A steel structure was the only way to achieve the distinctive hooded form of the new entrance within the restricted site. Credit: AHR/Daniel Hopkinson

‘Steel was the only way to achieve the tight structural zone and sweeping curve of the entrance,’ says Mott MacDonald senior structural engineer Jonathan Svikis.

The preference for prefabrication also drove the decision to use bolted connections, with every one tested during pre-erection trials offsite.

‘Normally the structure would have been welded but because we’re working above the river and railway it needed to be something that could be erected quite quickly on site,’ he says.

Mott MacDonald piled foundations and built two piers in the middle of the river. These were positioned to align with the rail viaduct arches so as not to impede the water flow, and to rise high enough to clear a 1 in 200 year flood event. The piers support a steel transfer deck (see overleaf) of galvanized beams which in turn supports the primary structure of the new entrance (see right).

During the detailed design process Mott MacDonald and AHR realised they’d need to reduce the structural zone to 400mm from the 700mm of the initially proposed curved portal frame concept structure, in order to accommodate all the internal elements.

But with the boundaries of the building fixed, the design team utilised parametric modelling to run curvature analysis, and used this to inform a redesign of the frame. This led to the replacement of the chunkier I-sections with closer-spaced RHS hoops and rafters to give a less faceted, more curved profile and, crucially, the introduction of a diamond-patterned diagrid structure. As well as reducing the structural zone straight away, this structure gave a strong architectural expression to the interior of the building when exposed, according to Beaumont. More drama is added by striking views over the river through the fully glazed entrance facade from the top of the escalators and stairs, although the Schueco system incorporates strategic opaque panels to discourage congestion at mezzanine level.

At the top of the entrance structure, a new upper passenger level with ticket barriers was built above platforms 15, 16, and 17 to join the existing concourse bridge. This is hung from two primary trusses spanning 17.7m and 19.5m. Spliced for ease of lifting, they were installed during weekend rail possessions.

Additional support is provided by a new column on Platform 15 on top of the Victorian structure. To accommodate the extra load of the new upper level, one of the viaduct’s quadripartite arches was strengthened with four curved plate girder ribs on the underside of the arches, each tied back into the masonry with 1m long anchors. To ensure a perfect fit, the engineer carried out a point cloud survey of the existing arch and integrated that into the steelwork model before fabrication.

Use of BIM was vital to such a complex project where the design team was working within a 50mm tolerance for the structure. It was also useful for communicating key details to the client, construction and maintenance teams.

‘Without BIM it would’ve been almost impossible to do because of the high number of constraints,’ says Jonathan Svikis. ‘We’d have taken two or three times longer to get to the fabrication stage.’ He adds that William Hare was able to use the BIM model as the starting point for its steelwork details.

‘It hasn’t been the biggest project but is definitely the most challenging and intricate,’ Svikis says.

‘It was a very unusual job to work on – tricky but interesting,’ says William Hare project manager Sue Wadsworth. ‘Normally there might be some element of complexity amid the normal. But there, it was the other way round.’

The new entrance is estimated to save one-fifth of the 20,000 users of the station up to 50 minutes a week. Incorporating 370t of steel, the project won the steel category of the UK Tekla Awards 2015. 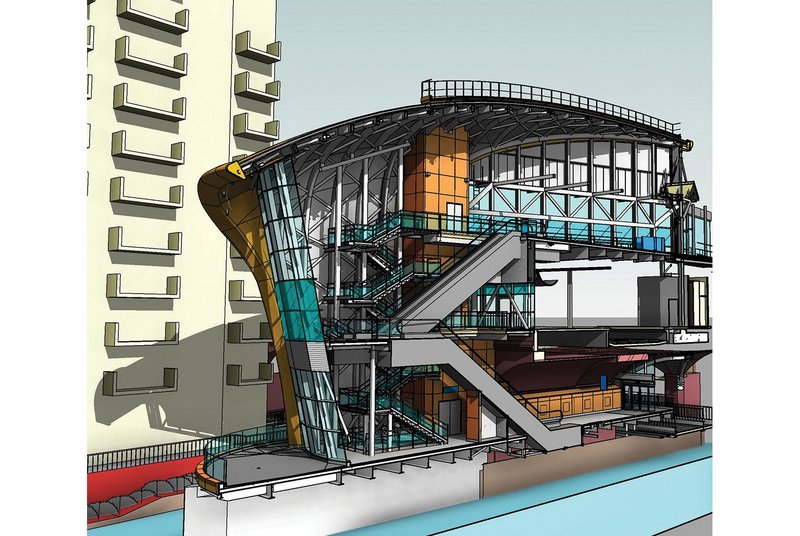 The portals rise to 20m tall, each with a horizontal span of approximately 12.5m and spaced at 1.8m intervals. For ease of manufacture and transportation, all but the smallest of the frames are divided into four parts – two 400mm x 200mm RHS columns and two rafters of the same size spliced at the highest point of the curve. These have radii ranging from 2.8m to 12.3m to support the required roof profile. The curved rafters were bolted together in the assembly yard downriver before being brought to site by barge and lifted on to the columns. The frames are braced out of plane with diagonal 120mm x 120mm x 5mm square hollow sections to form a diagrid structure over the sides and curved roof of the entrance. There are 11 frames at river deck level and a further 9 extending over three railway lines to form the connection to the higher concourse level. 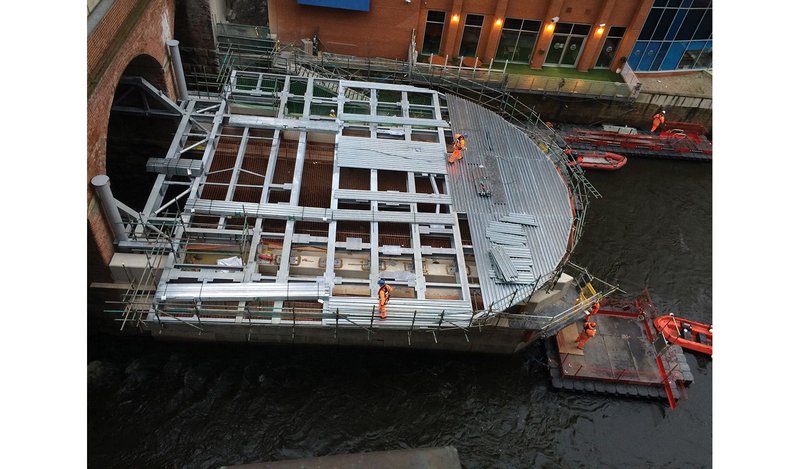 A series of galvanized beams, positioned at 1.8m centres, forms the deck. These span 10.2m between the new concrete piers and cantilever a further 3.5m beyond the centre line of each pier to support the columns above. The 650mm deep deck terminates in a curved southernmost end, which cantilevers 2.3m beyond the southernmost primary beam. The engineers explored precast and in-situ concrete options but found prefabricated steel to be the most practical solution, especially for a winter installation. Two upstand trusses measuring 2.1m deep extend 15m from the transfer deck through the viaduct to provide a pedestrian route to the street behind. Access to the east and west riverbanks was provided by two welded, box section footbridges. The transfer deck was constructed in about two weeks.