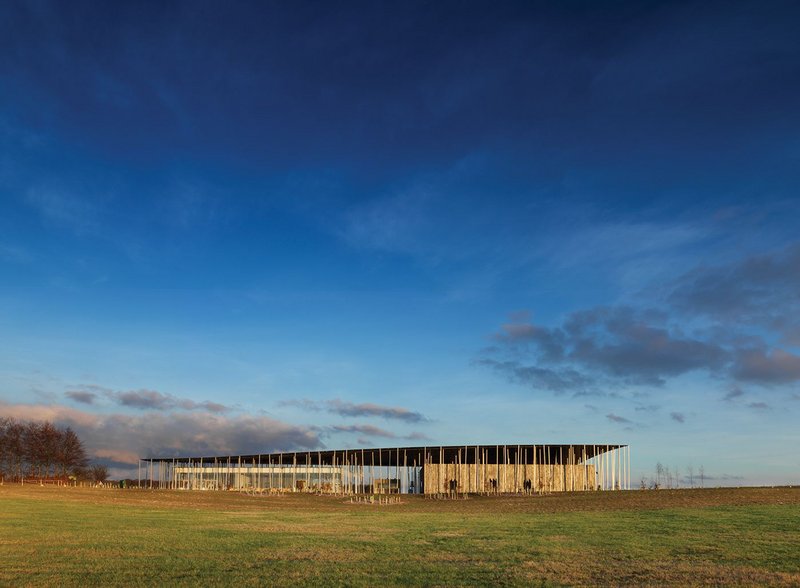 You can’t actually see Stonehenge from its new visitor centre. Not that this bothers architect Denton Corker Marshall, whose delicate, steel-framed building concludes English Heritage’s 30 year quest to find a better way of presenting the world famous prehistoric monument. On the contrary, the centre’s position some 2.1km from the Stones and its low profile appearance are an essential part of the practice’s aim of creating a building with minimal impact on the main attraction, which is revealed to visitors after they leave the new centre and move towards the monument through the landscape.

While the Stones themselves convey immense solidity and permanence, the visitor centre is all about lightness and transparency, achieved with the use of more than 300 strikingly slender, angled steel columns supporting an undulating roof.

Denton Corker Marshall won a fresh competition for the project in 2008 after its previous scheme was scuppered by road tunnelling issues. The challenge was how to achieve a setting for Stonehenge that befitted its World Heritage Site status while also meeting visitor needs.

First the decision was made to position the visitor centre some distance from the Stones at Airman’s Corner to the periphery of the site, in order to move as many of the facilities as possible away from the monument. In tandem with this came the architect’s idea of containing water storage and treatment facilities in a separate building, which  simplified requirements for the centre itself.

The next issue was how to create a suitably restrained expression for the building that didn’t reference the material or construction of the Stones. In addition, it was important to the architect that the building didn’t exceed the 7.4m height of the tallest trilithon stones. Denton Corker Marshall founding partner Barrie Marshall suggested the pared-back concept of a waved roof atop a host of columns sheltering two distinct pods.

‘We didn’t want to put a structure in the landscape that felt static and rigid. A thin undulating canopy however implies lightness. Vertical columns wouldn’t work aesthetically but having them at a camber naturally pulls it all together,’ says Denton Corker Marshall associate Dominic Davey.

The architect worked with engineer Sinclair Knight Merz (now Jacobs)  and steelwork contractor S H Structures to devise a suitably respectful, and if necessary removable, structure that would leave no lasting impact on the site. This led to the design of a raft foundation that was just 300mm thick, floating on fill over the retained top soil. This continuous slab was more appropriate than discrete footings in order to ensure that the canopy is held down in high winds, and also to mitigate potential differential settlements, which was particularly important given the north pod’s fully glazed facade.

Having settled on steel for canopy and columns because of its superior strength-to-weight ratio, the engineer used the pods to stabilise the structure

Before choosing steel for the frame, the engineer considered timber with glulam spine beams, but found that the depth of the glulam would be too big for the lightness the architects were after. Having settled on steel instead for both the canopy and the myriad of columns because of its superior strength-to-weight ratio, the engineer used the pods to stabilise the structure.

‘We couldn’t let the roof swing around on slender columns without some other restraint so we used the pods themselves…If you weld the columns up to the canopy structure it acts like an inverted cantilever with the columns restraining the canopy and putting the horizontal load into the roof of the pod,’ said project director Paul Swainson.

The roof geometry was the key challenge. While meeting the architect’s vision for a lightweight undulating canopy, the engineer and steelwork contractor considered the need to standardise its fabrication and erection as far as possible. The roof grillage was therefore oriented so that all the members lying parallel to the roof’s valley feature are straight, while those in the orthogonal direction are curved to a standard radius. In this way, the contours of the timber rafters plus associated deck and soffit naturally follow the canopy’s single curvature. 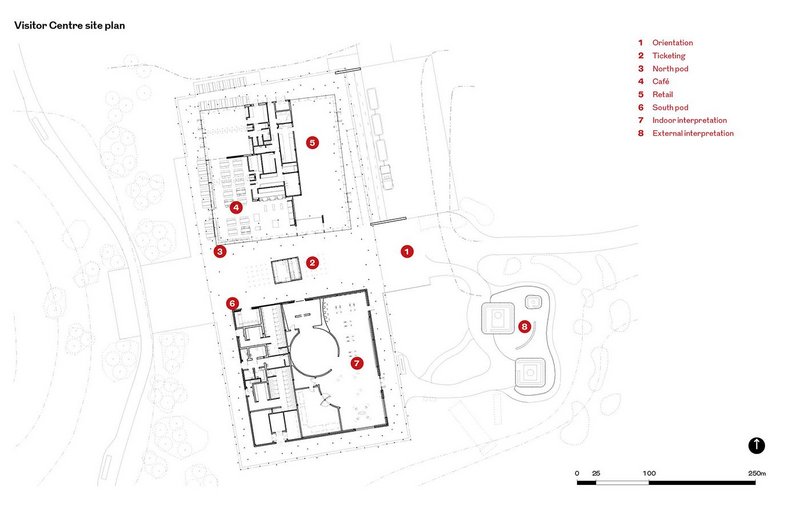 The roof shelters two pods with independent steel-framed structures of beams and columns with bolted connections. The north pod is glazed with 795m2 of café and retail facilities incorporating discreetly positioned cross-bracing to stabilise the frame. The south pod is an 809m2 exhibition space with clear spans of up to 17.5m. The latter is clad with structural insulated panels that are designed to function as stressed-skin diaphragms to stabilise the steel frame by transferring lateral loads from the roof to the foundation. The roof is clad in zinc, with a perforated soffit around the perimeter to deliberately blur the boundaries between the canopy, the sky and the landscape.

Co-ordinating the setting out of the raking columns was also quite a task at both design and installation stage. Each column had to be individually threaded from ground level – or in the case of the shorter columns on top of the pods from pod roof level – through permitted locations on cladding joints to meet a roof grillage member 140mm beyond the clad surface.

S H Structures completed the pods in just two weeks each, with the roof canopy taking three months to erect in careful sequence with the columns (see box).

Work has recently finished on the restoration of the immediate landscape around the Stones, bringing to a close the epic process of replacing the 1968 visitor centre and improving the monument’s setting. Both the Stones and the new £27m visitor centre can now be far better appreciated by the one million visitors that make the pilgrimage there each year. 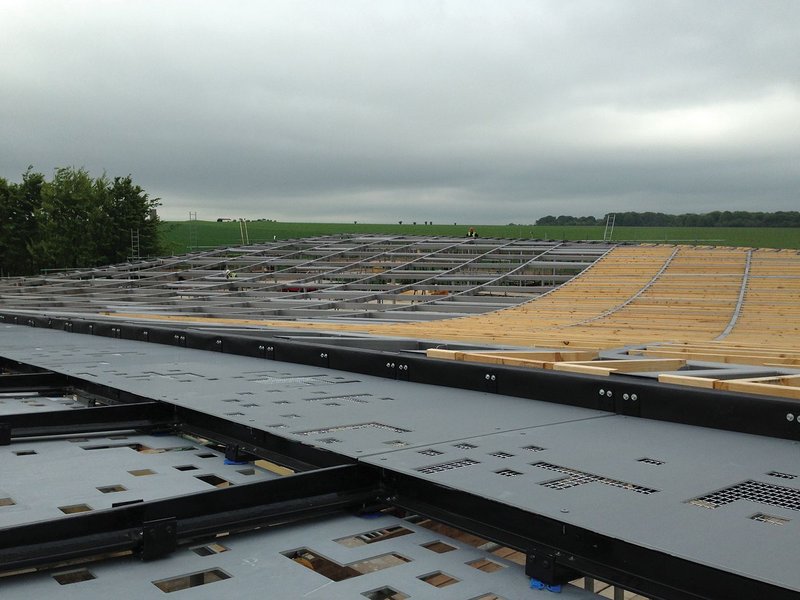 The 80m by 40m roof canopy is formed by a grillage of curved and straight 200mm by 100mm hollow sections. Installation provided steelwork contractor S H Structures with a major challenge since the roof members needed to be installed on top of raking columns. These required propping individually, a grid line at a time, in readiness for the roof steelwork to be installed. This was delivered to site in curved ‘ladder’ sections formed from 17.5m long, Rectangular Hollow Sections. Once positioned in place on temporary supports, the splices in the ladder trusses were welded together to create the undulating form, with shorter secondary welded members added to give the canopy stiffness. The steel structure supports softwood rafters and curved plywood sheeting to the deck and zinc soffit surfaces. Finally the shorter, pod-top columns were welded to the canopy steelwork and the temporary supports removed. 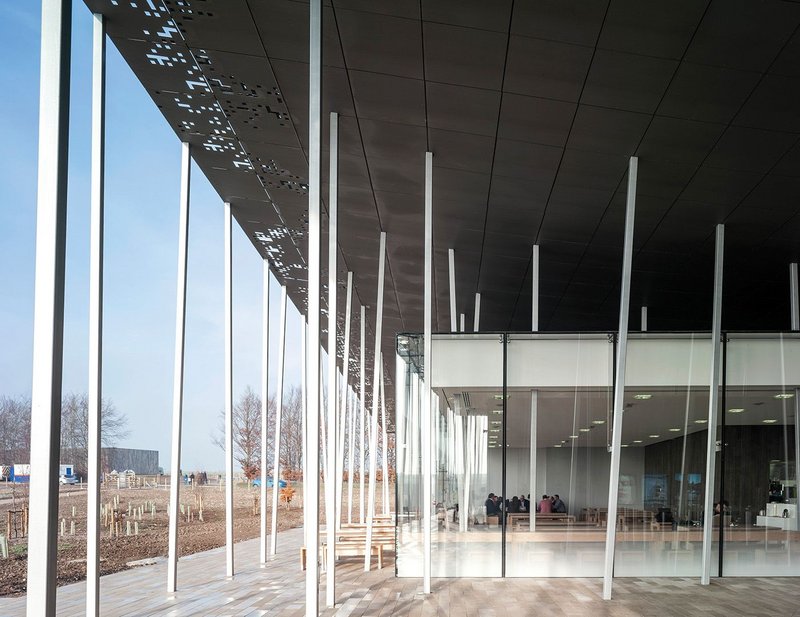 More than 300 raking steel columns support the roof grillage, each made from 100mm by 100mm square hollow sections. These form a perimeter line around the building to support the perforated zinc edge of the roof canopy as well as providing support through and around the pods and orientation area. In the café, these give the illusion of carrying through as unbroken columns up through the café soffit and on towards the roof. However, the approximately 100 upper column sections are actually separate, shorter columns that spring from the pod roofs and play a major role in providing stability. According to the engineer, these act as inverted cantilevers with fully welded, moment-resisting connections to the canopy grillage and pinned connections to the pod roof beams, and then to the raft foundation.