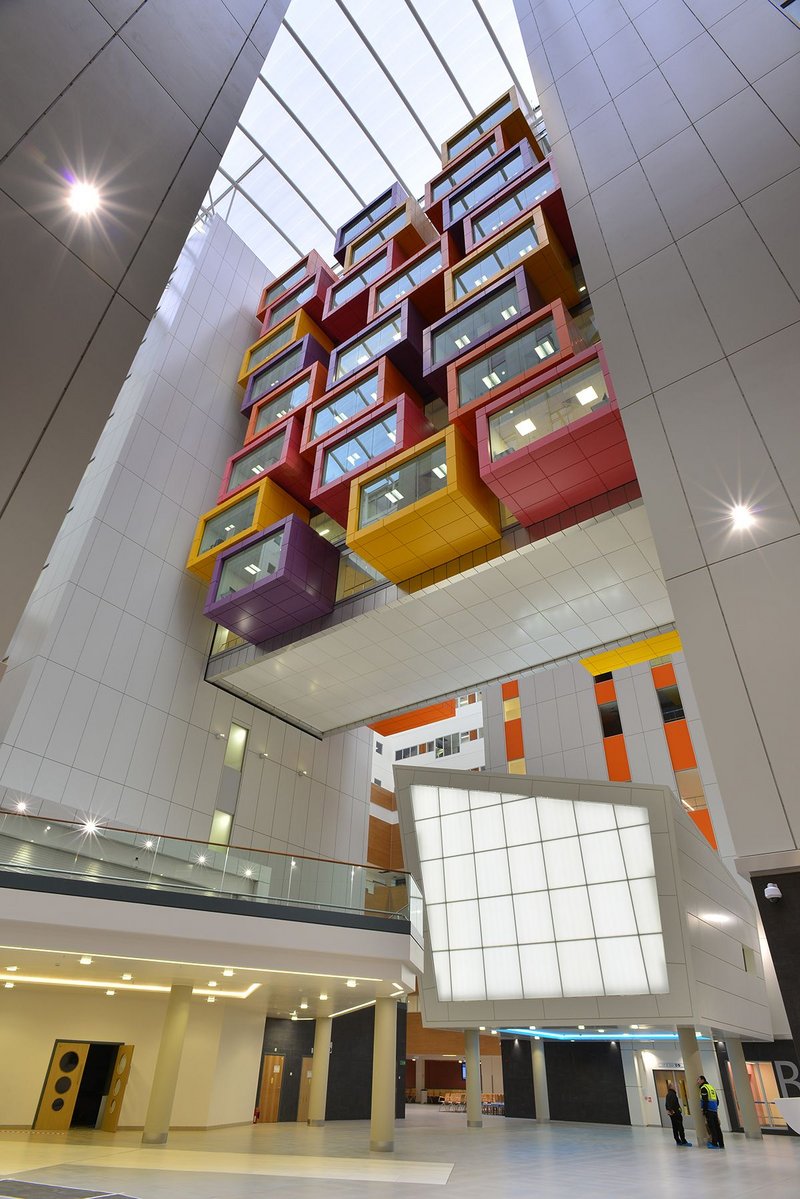 The newly renamed and opened Queen Elizabeth University Hospital Glasgow is a benchmark project for many reasons. Officially opened by Her Majesty the Queen on 3 July, one reason is its size – being the largest hospital building project in Europe - and another is its bold and exciting design. Designed by specialist healthcare architects IBI Group (formerly Nightingale Associates) for client NHS Greater Glasgow & Clyde, the new building is colourful and brave in its use of internal “floating” cantilevered pods, among other elements.

First impressions aside, the scheme is equally ground-breaking behind-the-scenes. It is Armstrong Ceiling’s largest off-cut recycling project to date; with more than 10,000m2 or 35 tonnes of mineral ceiling tile off-cuts diverted from landfill. The hospital’s main contractor Brookfield Multiplex had previously worked with Armstrong to recycle 8,000m2 or 32 tonnes of Bioguard Plain ceiling tile off-cuts at Peterborough City Hospital.

The Queen Elizabeth University Hospital Glasgow is also a benchmark as the project containing the widest selection of elements from Armstrong Ceilings’ service and systems portfolio – not only tiles for acoustic and healthcare purposes, but a variety of suspension and Dry Wall Grid systems with bespoke Axiom perimeter solutions. All the products are backed by the company’s industry-leading 30-year systems warranty.

Home to major specialised services such as renal medicine, transplantation and vascular surgery, the new publicly-funded 170,000m2 hospital gives Glasgow one of the most advanced adult acute services in the UK and is the biggest critical care complex in Scotland.

The development is located on the site of the former Southern General Hospital and took five years to build. The combined adult and children’s hospitals are expected to treat 750,000 patients every year, including 110,000 A&E patients. It has one of the biggest emergency departments in Scotland, 30 state-of-the-art operating theatres and a dedicated laboratory block. The development is divided into two elements – the larger 1109-bed adult hospital in single-room accommodation and the adjoining smaller 256-bed children’s hospital. The adult building’s three-storey podium houses operating theatres, diagnostic, outpatient, ambulatory care and emergency facilities as well as an atrium with retail and restaurant units, while the eight-storey tower rising above has a helicopter landing pad on the roof. Patient rooms overlook landscaped gardens to help promote a sense of well-being.

Such was the size of the project that it required two members of Armstrong’s Green Omega network of specialist sub-contractors specially recognised for their recycling expertise - Roskel Contracts and PFP.

PFP then had a team of up to 60 men on site for two and a half years, installing 110,000m2 of Armstrong’s Bioguard Acoustic mineral tiles and a variety of wall-to-wall suspension and transition systems.

In the brightly coloured internal cantilevered pods - the most jaw-dropping element of the project - a 100mm Axiom profile was coupled with a bespoke 225mm Axiom profile and riveted together to create a 325mm bulkhead/upstand at a custom length of 3.6m.

This particular method took just 25% of the installation time compared to traditional plastering methods, prompting PFP to remark that this Armstrong system represented the next generation of building products.

Along with the Armstrong Prelude standard and non-corrosive exposed grids, which combine exceptional stability with installation ease, all of these systems were installed by PFP a year before tiling to minimise damage to services in the ceiling void.

Senior quantity surveyor (construction) for Brookfield Multiplex James Bailey said the Armstrong wall-to-wall ceiling systems specified by the architects had met all the required Scottish Health Technical Memorandum (SHTMs) and were a “suitable product range for a major hospital”.

He also added: “Armstrong’s commitment to recycling damaged tiles and off-cuts was a key factor in their selection for this project.”

The off-cuts from the ceiling tiles supplied by the Glasgow branch of distributor CCF were collected in one-tonne bags supplied by Armstrong. These were then gathered in an on-site holding area by on-site waste management company Skipeez until there were enough (20 bags on pallets) for an Armstrong truck to collect them and transport them back to the factory in Gateshead.

PFP’s Gary Mortimer said: “The sheer size and complexity of this project could have made it an extremely challenging, but the recycling element, particularly with Skipeez on board, went very smoothly.

“We had never used such a variety of Armstrong systems before on one project, but thanks to the level of support we received from its local sales and technical teams as well as the distributor, we delivered a project we are very proud of.”