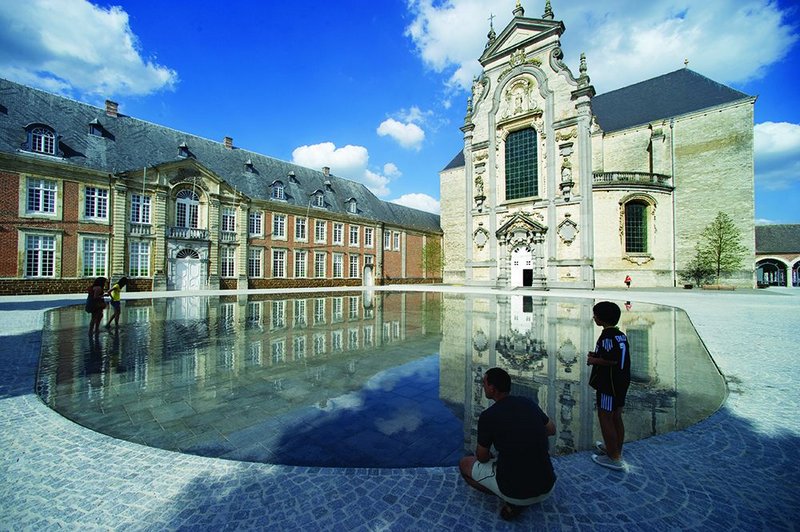 When God made it out to Averbode Abbey in the small village about 60km outside Brussels, he must have hitchhiked. Belgium may be the administrative heart of the EU, but it feels pretty remote once you’ve left its Brussels towers and are trying to thumb a lift back to them. Certainly using public transport is a devilish affair; as PIP discovered on a six hour journey back from the recently completed reinvention of Averbode Abbey courtyard, which has just won Belgium’s 2013 ‘Best Public Space’ Award.

Founded in the 12th century, Averbode has had a tempestuous history, starting with the original church being destroyed by lightning in 1499. It prospered in the first half of the 16th century but its occupants were then decimated by bubonic plague. By 1672, with over 80 monks re-established there, a new library and priory buildings were constructed alongside its grand baroque abbey, designed by Jan van de Eynde, and the abbey flourished again. Before WWI it was the largest employer in the area, with a printing works (sold off only 15 years ago), a dairy and even a bank. Scaling down its commercial activities in the 1960s, but still making its Speculoos biscuits, the abbey retains a special place in the lives of Averbode’s tiny population. 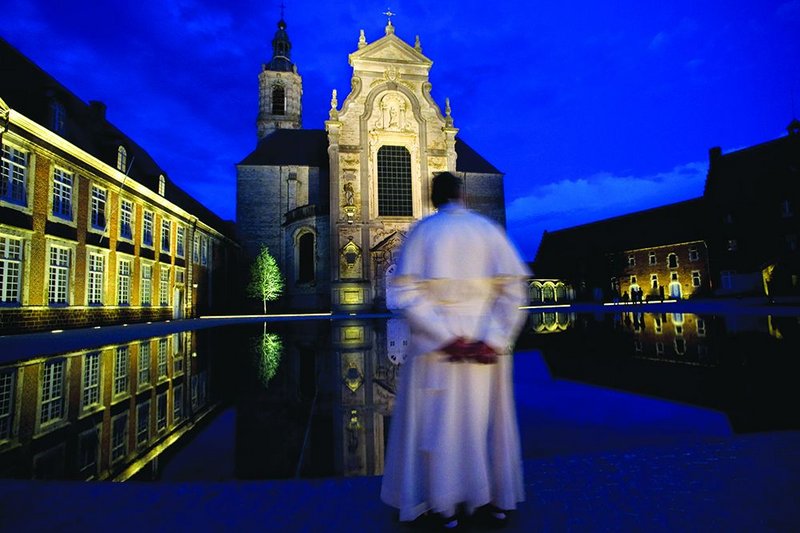 A monk contemplates the courtyard, which is transformed by the pool by night

Situated on the edge of the village and perhaps due to its former commercial activities, the abbey courtyard, set beyond its 14th century gatehouse, effectively remains a public space. ‘It was cobbled, but was mainly just used as a car park for visitors,’ says Omgeving project architect Luc Wallays. He adds that the abbey is also a popular rest point for the many amateur cyclists who whizz across Belgium of a weekend – some of whom are from the practice. Over time their passing conversations with the monks on the general low quality of the space must have hit home, because in 2011 the abbot charged the architects with proposing a vision for the courtyard. And the Lord provides; after they had seen it, the abbey estate also stumped up the €800,000 they needed to carry out the master plan for this 5000m2 site.

‘Our basic idea was to do as little as possible,’ recalls Wallays. ‘The courtyard has lovely buildings around it, so we wanted to add to the space without competing with them. We also wanted it to be a meditative space; so in the end we decided to introduce a shallow mirror of water to reflect both them and the forms of those who come to visit.’ This concept of reflection is key – there was never any consideration of a fountain to disturb this stillness, or for any stagnation to cloud the water’s surface.

The 850m2 shallow pool that the firm designed in the new granite cobbled courtyard is the aesthetic centrepiece of the scheme. No more than 150mm at its deepest point, it tapers to a mere 20mm deep at its perimeter, and forms the mirror-like surface in which the abbey’s main facade and surrounding buildings are reflected. The pond is fed by four attenuation tanks that sit beneath the grassed area to the south, which have the capacity to hold over 15,000l of water. ‘The engineer decided that run-off from the square around was clean enough to be fed directly into the pond before the filtration that occurs as it is pumped into and back out of the holding tanks’, says Wallays. This also turns it into a form of balancing pond. ‘For the bed of the pool there’s a change from cobbles to smooth ashlar granite – which, he explains, was a conscious decision. ‘We looked at continuing the cobbled surface, but strangely it seemed to distract from the quality of the reflection.’ That wasn’t the only reason though. In normal mode the pool is fed from the centre and drained from the edges, but Wallays adds that it’s possible for the whole pool to be drained from the feed point and turned into a smooth working floor for outdoor events.

The new cobbles are predominantly of Portuguese granite, augmented at key points with existing ones from the former square, notably in front of the gatehouse. Black basalt cobbles are laid where trees are planted next to  the abbey’s main facade to complement the existing mature lime trees. At this point, and where grassed areas delineate the seven allocated parking spaces from the more tranquil central area, raised granite kerbs have been installed. On those by the abbey, if you crouch down, you can even read its motto carved into their vertical face.

The furniture for the square, such as bins and bike racks, was bespoke – designed by the firm. Signage is laser cut sheet steel coated in a Cor-Ten effect painted finish. It’s discreet when used at low level for the parking bays, bolder on the backlit information ‘monolith’ at the entrance – its rusted look perfectly matching the reddish-brown hue of the gatehouse stone. Benches, designed with designer Stefan Schöning, are made of larch sourced from the woods around the abbey that had formerly served the area’s mining industry.

LED lighting was a fundamental component of the new design. Previously completely unlit, it was Omgeving’s idea to transform the space by night and make the courtyard truly come into its own. Flush to the cobbled surface, waterproof strip luminaires now run alongside the old stone ditch drain of the library and buildings across the square opposite, washing their walls with a soft cream coloured light. Flood fixtures illuminate the west facade of the abbey, now reflected dramatically in the dark pool that sits in front of it, transforming the courtyard and imbuing the whole space with a dreamy, magical quality – one made all the more powerful both by being precisely contained and arising out of the darkness of the densely wooded approach road beyond the abbey complex.

Apparently the locals are proud of their new rural square and are to be found there as often by night as they are by day. Wallays explains that even though the space was always effectively public, it was never really used as such. That has all changed now and the gatehouse’s huge door is never closed. As importantly, the changes have had an effect on the abbey’s dwindling community of 35 monks.

‘They have always kept themselves to themselves, but in a sense the design has helped them to reconnect to the real world too – and to draw them into the social life of the village,’ concludes Wallays. Yet strangely, the courtyard seems to belie that newfound sense of dynamism and purpose – by night the pool is a still of reflected tranquillity; while by day its grey granite cobbles form their freeze-frame of ripple interference.