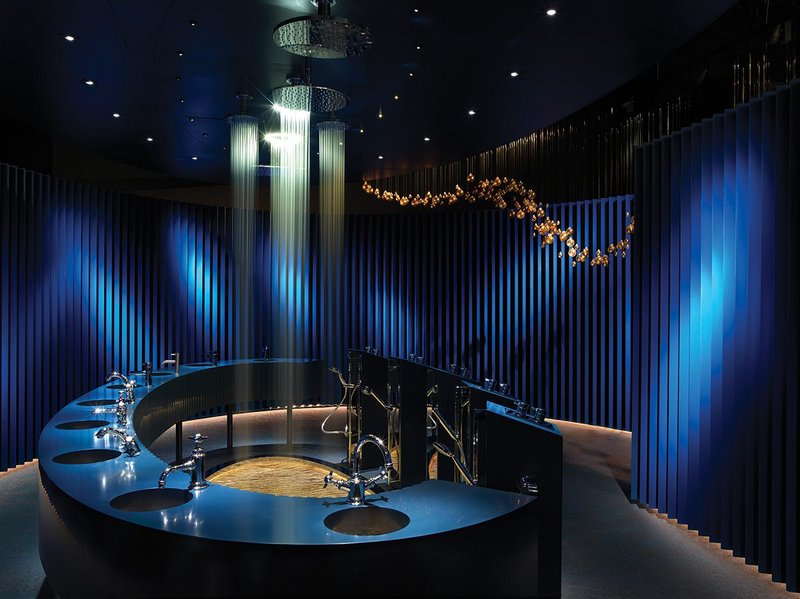 Terminating the showroom is a darkened egg-shaped space where visitors experience a showering light show.

It might be the last thing you’d expect on a faceless industrial estate just outside Dartford (it certainly was for me), but something both distinctive and dreamy has been designed by two firms of young architects for sanitary ware supplier Bathroom Brands Group, in the company’s £350,000 mission to create something that is both exemplary office space and the best showroom in the country.

It didn’t help that the firm was already long into the construction phase of its new warehouse HQ before it had its ‘road to Damascus’ design conversion. Threefold Architects partner Matthew Driscoll was approached by the client last November and challenged to come up with a design that would unify the activities of its staff in a bold and social way. After years of growing on an ad hoc basis, its various departments were isolated in four different buildings, and the new office was, in a sense, to be a celebration of the firm’s success. But with the warehouse layout already prescribed, there was little room for manoeuvre in the eight months that both architects were given to pull the rabbit out the hat. 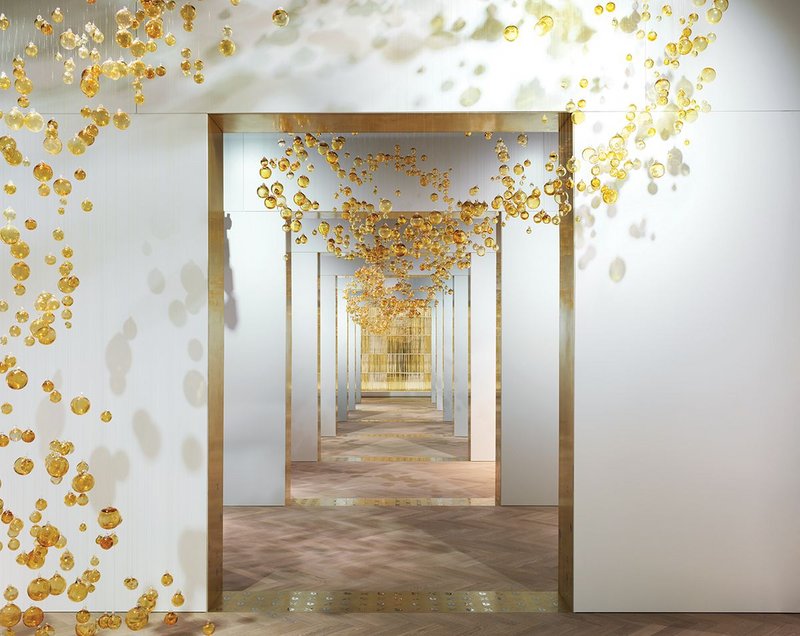 Partitions separate the various bespoke bathroom options, all connected by 6,000 glass bubbles and started by a stunning curtain of WC chains.

Threefold was presented with two stacked floors of office accommodation 60m long and 8m wide – not dimensions that brought to mind the word ‘interaction’. As a result its proposal, ‘The Bridge’, was designed to dissolve that length by creating interaction points along it, and, by placing its main level equidistant between the first and second floors, to break down the vertical separation too. Running a 3m wide circulation slot down the length of the office to join the ground entrance and first floor café with the second floor showroom, the firm opted for prefabricated LVL timber forms that could be simply hauled in and then quickly assembled on site.

On its way, the multi-stepped form creates kitchen points, an amphitheatre space for big meetings, and more private booths for work/ conversing. A triple-height wall of shaped timber slats deadens any echoes while rooflight plays across the slats’ surfaces.

For the office bathrooms and showroom, the client looked to Threefold’s former colleagues at Níall McLaughlin’s offices, Coppin Dockray Architects. After the robust simplicity of the offices, this is rather more dreamy, extravagant and costly. The firm created a dark initial space clad in glowing Japanese washi paper, within which it placed an imposing golden focal water feature formed of hundreds of brass WC chains. It’s a meditative moment before you hit the 90m long showroom, through which you will be guided by 5000 amber-coloured glass baubles; each one pinpointed in 3D space as if to mimic the vortex of a plughole. At the end of a dozen or so fully designed product scenarios, you’ll be sucked into a darkened blue space to experience a shower and faucet son-et-lumiere. The whole experience, set on a Kent business park, has a satisfying strangeness: it’s a bathroom showroom, Jim – but not as we know it.