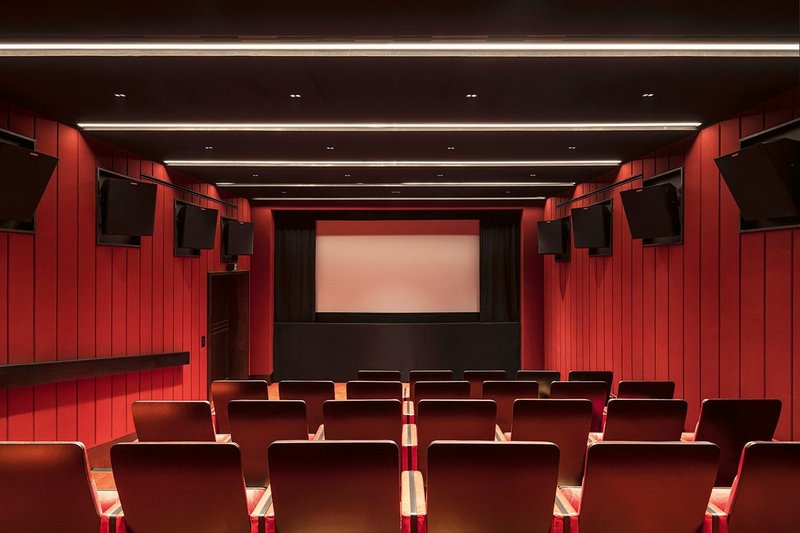 195 Piccadilly is testament to the resilience of the underdog. In 1831, an argument boiled over between the Royal Academy’s oil painters and watercolourists over what constituted a painting, resulting in the latter’s seceding to set up their own institute.

Fifty years later, in 1881, the split formalised itself in the creation of the Royal Institute of Painters in Water Colours, a grand free Renaissance style building designed by ER Robson. With busts of its eight founders – JMW Turner among them – set within stone wreaths, it seemed to chest beat proudly, a stone’s throw from Burlington House opposite.

Time, however, was not kind to the RIPW. The exhibitions may have continued behind its distinctive upper level, top-lit blind wall, but the institute itself underwent internecine struggles and by 1900, parts of the grand building were being incorporated into the Prince of Wales Hotel behind it.

By 1933 an arcade had been run through at the right end of the building and the central entrance had been consigned to a lesser one on the left. In 1956, the lower level became Pan Am’s London offices and, come 1976, the nascent British Academy for Film and Television Arts (Bafta) had moved in, blanking off the galleries’ Victorian rooflights and ramming a raked cinema in the triple-height space beneath it.

These intrusive interventions have been addressed in Benedetti Architects’ reconfiguring and expansion of the building, the result of a Bafta-invited competition to create an interior that better served members' needs while helping generate commercial revenue from the highly desirable location.

The architect’s biggest move was in proposing that the hidden rooflights encountered in its site investigations were not only reinstated but moved up 3m in near-entirety so as to insert a new floor beneath them. This not only maintained the current cinema provision but added to it with new lettable areas and a whole floor of restaurant and meeting spaces as well as a formal boardroom.

The practice's other key interventions included removing a 1930s access stair on the left to create an access lift and wraparound staircase leading off a new entrance area, finally giving the academy a presence at the shop-lined ground level. All these major moves resonated with the client and planners. Renato Benedetti informs me that the practice had planning and listed building consent within two months of its application.

He says the firm chose to draw on the academy's glamour and the opulence of the area – he cites the mirrored and marbled wonder of subterranean Soho French bistro Zédel and the art deco interiors of Piccadilly Circus station as prime inspirations. And it’s evident the minute you walk into the new ground-floor reception, with slabs of rich, creamy Italian travertine bringing a sense of indulgence to what would otherwise be a constrained entrance area.

Rich materiality continues on the lift core walls where the same travertine appears in striations, giving it a different if no-less luxurious feel. This is augmented by the brass reveals of the lifts themselves, complemented by deco-esque wall lighting – a theme that repeats elsewhere in the building.

Benedetti draws attention to the poured terrazzo floors, whose cast-in gold flecks will become more concentrated as you ascend the building; brass inlays meanwhile continuing that deco theme. The finely detailed oak handrail that follows the staircase up is clearly modern in design, especially where it parametrically emerges from the curve of a corner, but its dark stain gives the sense of it having been there as long as the building. Passing up the staircase, the depth of its arrow-slit windows are coated in varnished gold leaf.

All these themes repeat in the first and second-floor event spaces that augment Bafta’s state-of-the-art, luxurious, velvet-lined screening rooms. Bars throughout are variations on a theme of brass and travertine, highly reflective back-bars evoking a bygone era.

Specification in the toilets is similarly bespoke. As you rise through the floors, richly veined marble vanity units turn from Carrara to Rosso Lepanto and Verde Aver, while a modular parquet of matt, monochrome marble floor tiles subtly changes pattern – as does the oak floor in the various event spaces. With the spangled glass brass wall lights throwing patterns on to the walls, the sense of glitz and glamour is maintained even here.

On the same level is the boardroom, with its architect-designed table and chairs and timber floor laid with found parquet from the lower levels, with a recessed sideboard whose top is formed of tessellated triangles of site-sourced cut marble fragments. Splashes of old-school colour in Bafta’s cinemascopic reinvention