Dynamic ribbons of steel sweep over the platforms at Reading’s reworked and extended station. 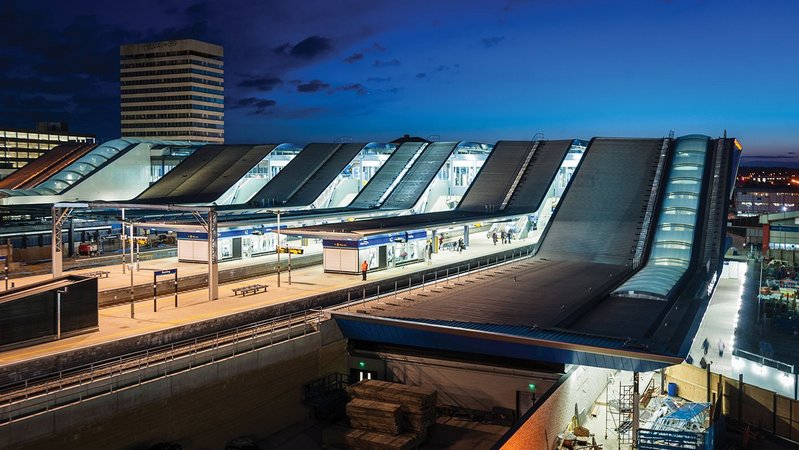 Platform canopies snake up and over the new transfer deck at Reading station Credit: Rick Roxburgh

Creating a sense of grandeur is much more challenging at a through-station than a terminus. This aesthetic ambition was just part of the task facing Grimshaw in its 15,000m2 reworking of Reading railway station, one of the busiest outside London. Not only did the practice need to greatly improve station facilities to cope with a huge growth in passenger numbers, it had to do so with minimum disruption to the trains passing through.

Grimshaw’s solution was to create a grand new steel-framed transfer deck/concourse, assembled to the side of the tracks in three parts and then ingeniously pushed into place over the tracks at night time. Cleveland Bridge created the concourse framework with Bourne Construction Engineering installing platform canopies and entrance buildings at either end of the deck.

The new passenger concourse and its distinctive platform canopies are part of a larger set of improvements to track and station to alleviate the largest bottleneck on the Great Western mainline. These include increasing the number of platforms from nine to 15 to cope with an anticipated 100% growth in passenger numbers by 2035.

Although Reading station was designed by Brunel, little remained of the original and the former ticket hall had long since been turned into a pub. A retail extension was added in the 1980s on the town side of the transfer deck.

At 31m wide and 100m long, the new transfer deck is considerably bigger than the one it replaced, which was just 8m wide. To avoid clashing with station operations and the listed pub, Grimshaw placed it some 105m to the west of its predecessor and created a generously proportioned additional entrance leading to the new concourse, with another on the other side of the tracks to the north.

The practice also took the opportunity of the station upgrade to improve links to the north side of the tracks by providing a public thoroughfare beneath them, with access near the new western entrance. Now under redevelopment, this area had previously been cut off from the town by the tracks, and the station improvements are regarded as a vital spur to its regeneration.

With no scope for a grand terminus-style shed, the key design elements were the transfer deck and the canopies, which from the platforms snake up and over the new concourse and back down the other side.

‘One of the challenges was getting a sense of grandeur on the platforms without a grand hall. Instead we had to use the basic components of canopy and bridges to create a station suitable for the number of passengers passing through,’ says Grimshaw partner Declan McCafferty. ‘The big move was to lift the canopy over the transfer deck to create these grand moments on every platform. It seemed appropriate to mark that with a piece of exuberant steelwork.’

Steel was essential for the structure, he adds, because of the large spans involved and the opportunities it gave for prefabrication.

‘Building over an active railway is always a challenge. Anything you can do to build outside the line environment makes it cheaper and faster,’ he says.

The deck is formed with a full height Vierendeel truss, which gave scope for large window openings on either side to provide views up and down the line. The curved platform canopies are supported using spine beams stretching the length of the roofs (the longest is approximately 250m). Because of the beams’ size, each needed two points of support at each escalator. The architect used pairs of U-shaped columns to minimise obstruction on the platform and create a dramatic feature that is amplified by its repetition across all the platforms.

Prefabricated platform canopy modules made by Bourne are lined with soffits coloured an intense metallic-finish blue – the architect had a limited choice since green, yellow, orange and red had to be avoided because they are used in rail signalling.

Where the canopies soar over the transfer deck, their blue underside is clearly visible so that it can be read as a continuous ribbon element as it passes along the platform and over the deck.

‘It’s a dynamic, expressive form that reflects the way the passengers move within the station, ‘ says McCafferty. The platform canopies are designed to neatly house all signage and signalling, minimising clutter on the platforms. A smooth soffit was essential to avoid opportunities for pigeons to roost.

A particularly challenging part of the station steelwork was the six curved jumbo sections in the new Western Gateline building. These were bent in the UK by Angle Ring Company to give the appearance of a continuous beam with three bends at the top and three at the bottom.

The transfer deck completed in the summer, a year ahead of schedule. According to engineer Tata Steel Projects, it is the largest pedestrian structure in the UK rail system. During the course of the project, it was announced that Crossrail would be extended to Reading by 2019, making the new concourse’s extra capacity all the more essential.

Steelwork contractor Cleveland Bridge assembled the passenger transfer deck on piers to the north of the tracks before ‘launching’ it in stages into position over the railway lines.

The lower deck structure consists of four lines of 1.4m deep plate girders connected by 1m deep plate cross girders. Girders were transported in 28m lengths and spliced adjacent to the tracks. The upper deck structure consisted of 600mm x 600mm jumbo hollow sections, which form a Vierendeel truss with the side steelwork. This was trial erected in Cleveland’s Darlington factory before being dismantled and transported to site for welding and re-erection.

In an overnight operation the two larger sections of the complete deck were launched using hydraulic strand jacks with the roof and concrete floor already installed. The first 30m section was manoeuvred into place over four nights without any trains running. However, the second section took just two days with rail traffic carrying on below as usual. The third – a 23m long end section – was erected in-situ over a period of weeks.

Working within a tolerance of 50mm in either direction, the bridge ended up just 3mm away from its target location on the bearings – even better than Cleveland Bridge’s 10mm target.

‘We surprised even ourselves,’ says Cleveland Bridge project manager Ben Binden, adding that although the structure itself was relatively simple, the launch conditions added to the complexity of the task. 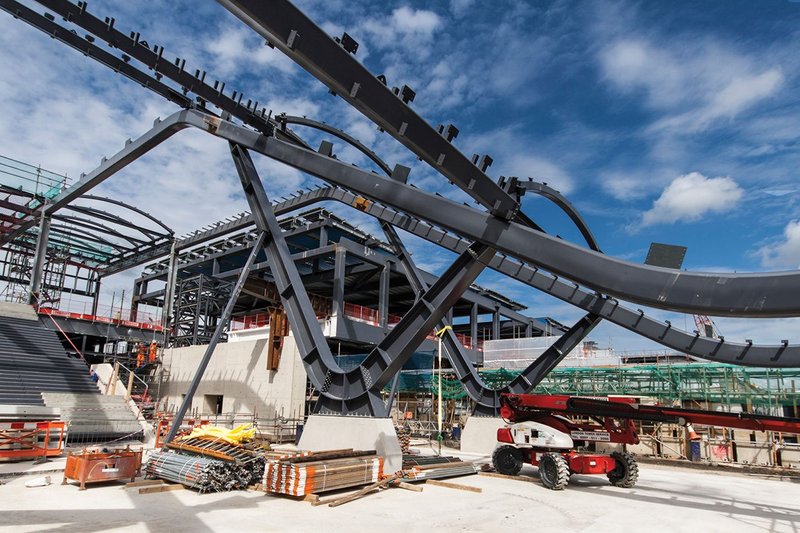 A pair of mighty V-shaped columns support the platform canopy at each side of the transfer deck. Credit: Steve Kennedy

Twenty ‘swish’-shaped welded plate girder columns – four per platform – form a key visual feature of the station redevelopment. These were installed by Bourne to help support the spine beams that run the length of the platform canopies before intersecting with the transfer deck. These beams support the platform canopy, which was prefabricated in 3m wide cassette panels at Bourne’s factory in collaboration with Lakesmere, and delivered in approximately 450 modular components covering 1,280m. With soffits and standing seam roof pre-installed, each module required only a simple connection to the next. This prefabrication limited the number of crane lifts to 460 – compared to 2100 had the canopy been constructed traditionally – as well as reducing site labour by approximately 3000 man hours. As well as the ‘swish’ columns, the canopies were supported by 116 additional columns and contain 54 km of cold rolled steel, estimates Bourne.