The famously fragrant gin has a refurbished distillery, and raised a glasshouse or two in the process

A heady mix of sensual stimulation and disorientation will confront visitors to the new Bombay Sapphire Distillery in Laverstoke, Hampshire, and not necessarily as a result of quaffing the company’s famous dry gin.

The multi-million pound factory complex, designed and masterplanned by Heatherwick Studio, is on an idyllic 2ha old industrial site straddling the River Test near Whitchurch, and ­involved the transformation and refurbishment of over 40 buildings.

At its centre stand two elegant new waterfall-shaped glass houses, which appear to float on the river surface, and were designed to give visitors a first hand experience of the 10 exotic plant species, or ‘botanicals’, used in the distillation, in their native environments.

These innovative self-supporting glass and steel shells, one slightly larger than the other, plunge down from the wall of an adjacent Victorian distillery building, giving visitors inside the impression of standing in a spiralling vortex. That sense of movement is enhanced by the flow of warm air through the spaces – excess heat pumped in from the distillery – which also carries the scent of the exotic plants.

Although evocative of the delirium associated with drinking gin, the glass houses were not conceived under the influence, quips Eliot Postma, project architect at Heatherwick Studio: ‘At one stage we were looking to reuse some of the famous blue glass from Bombay Sapphire bottles as part of the interior design, so we requested a few cases of gin so we could do some “experiments” with the glass. I was very excited when a case turned up at the studio, but sadly there were only empty bottles inside.’

The Laverstoke site lies in a conservation area and Site of Special Scientific Interest and dates back to the early 900s, when a corn mill is mentioned in the Doomsday Book. The land was developed in the early 1700s when owner Henry Portal began making the paper used to produce bank notes for British Empire, and over the following two centuries it grew into a sprawling industrial complex.

The site had lain derelict for a decade when it was stumbled upon by Bombay Sapphire’s branding director, who lived locally and saw the potential to transform it into a state of the art production facility and visitor centre.

Heatherwick’s ambitious masterplan involved the demolition of 23 structures, many of them tin outbuildings that had grown like barnacles across the facades of the principal Victorian buildings, and the refurbishment of 21 more, three of them grade II-listed. The River Test, hidden behind ugly high sided concrete banks, was restored and widened in places to reorientate the facility along a central axis.

The heart of the scheme is a reinstated Victorian courtyard where visitors can explore two working distilleries and the two glass houses, which stand on a widened section of river.

‘We wanted  to open up the factory so people can feel, touch and smell the distillation process,’ says Postma. ‘Part of that meant giving them an experience of the ingredients that go into making Bombay Sapphire. Rather than use fibre glass copies of the botanicals, we were keen to use the actual plants, which meant creating two environments, one tropical, one Mediterranean.’

Arup engineered the design, which was installed by glazing contractor Bellapart and inspired by the small panes of glass and fine ironwork seen in many Victorian and Edwardian botanical glass houses. Then, the new science of horticulture had driven the creation of the palm house at Kew and the craze for Wardian cases – ornate indoor glasshouses for growing and displaying collections of exotic ferns and orchids.

‘We wanted to move back from the current industry trajectory towards bigger and bigger glazing panels with large widely spaced steel framing elements, which is a very different way of achieving transparency,’ said Graham Dodd, fellow at Arup.

The dramatic flow lines of the mullions were also designed to reflect the movement of warm air through the space, which is waste heat taken from the energy intensive process of distilling gin in copper stills. Heatherwick Studio realised that by storing the heat energy in two large tanks in the Daiken still house building next door it could be drawn into the glasshouses at their base, then rise through the neck  and exit through a plenum where the glass houses connect with the still house. The same system can be used to top up radiators in the visitor centre and forms part of a BREEAM ‘Outstanding’ rating, the first of its kind for an industrial building and a refurbishment.

Rather than hanging from a separate steel structure, the glazing  is arranged in a series of vertical pleats between the steel mullions, creating a stiff shell that gains its strength in a similar way to a folded piece of paper.

‘The steel mullions are not strong enough to stand up on their own, they need the weight of the toughened glass in between and the ­bracing it provides to complete the structural system,’ explains  Dodd.

The glazing is arranged in a series of vertical pleats between the steel mullions, creating a stiff shell that gains its strength in a similar way to a folded piece of paper

Manufacturing the glass was complicated by the fact that it had to curve and twists in different directions as it rises toward the apex. Arup went through a long rationalisation ­process using Rhino software and specially written script to turn the complex shapes into geometrically simple cylindrical curves, with optimal break lines and joints between different panes, suitable for manufacture.

‘Bending toughened glass to a changing ­radius or twisted shape is not possible with current manufacturing techniques, so the approach was to get it as close to set of cylindrical sections as possible,’ says Dodd. Despite this meticulous approach, the team knew there would still be a slight mismatch, so each panel had to be mechanically cold bent into shape on site ­before being clamped into position.

There was a further complication: the glass had to be manufactured in as thin a layer as possible to reduce the amount of stress it would experience when being bent on site, but retain enough strength once installed to resist compression loads of up to six tonnes. Once the glass was in place, the panels were silicon sealed and set into position with high strength resin grout.

One weakness associated with vertical pleated structures is the potential for deflection from side loads, particularly wind. This was resolved using a clever detail at the junction between the glass and the foundation. The vertical steel members all sit on ‘springs’ (thick stainless steel plates profiled on plan to adjust their stiffness) designed to give just the right amount of axial stiffness to  stabilise the base of the glasshouse, but not so much that when slight movement occurs it generates damaging forces.

Thicker and stronger panes of glass are used at the base of the structure, so that in flood or heavy rain conditions water can rise up around it without causing damage, potentially also giving visitors a glimpse of the many fresh water trout swimming about in the river. The distillery opened to the public earlier this month, and this is another slightly disorientating effect designed to make visitors feel a little tipsy – though not in the inebriated sense. 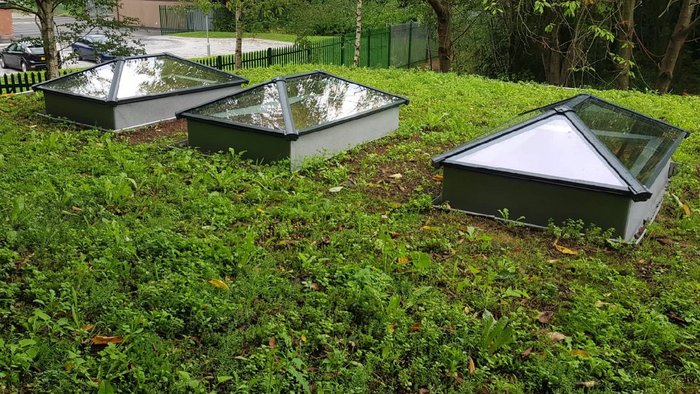 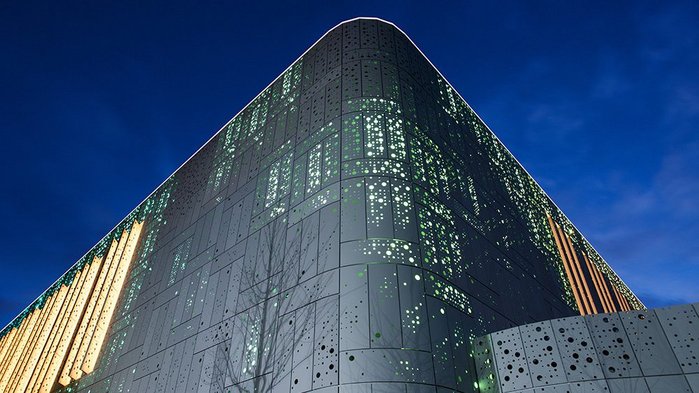 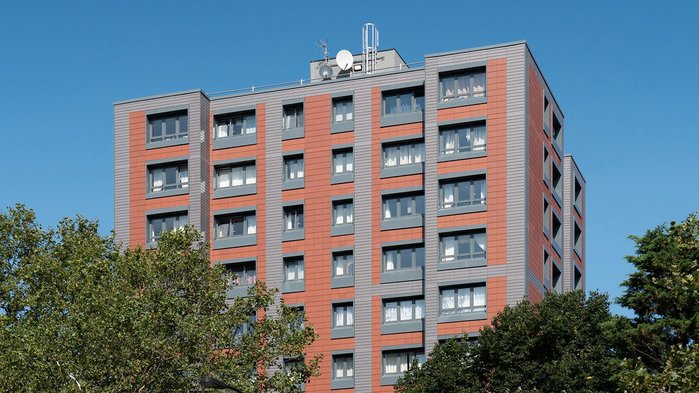