Daylight, views and a sense of space fall victim to exterior aesthetics in Bristol’s hospital refurbishment 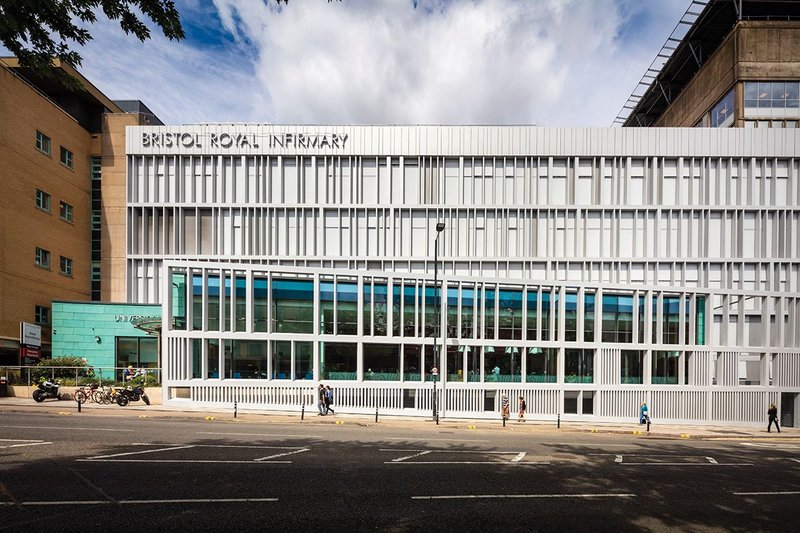 The reclad peels away on the three lowest levels to encapsulate Capita’s recent welcome building, which was built and funded separately but almost simultaneously. Credit: Craig Auckland, Fotohaus

If it’s possible to have a favourite hospital, mine is in Spain. It’s the Hospital de Sant Pau in Barcelona. Look it up, it’s a magical place with not only light, air and openness but architectural joy and wonder: an art nouveau complex of pavilions with turrets, golden domes, colourful glazed tiled roofs, orange trees and gardens yet now with modern ambulances and nurses.

For one reason or another I’ve spent a fair amount of time in hospitals. I know they are challenging environments with competing requirements, beleaguered by cost. So I was excited to see Spanish architect Nieto Sobejano’s new £2.8 million front for Bristol Royal Infirmary in the centre of the city. Roland Halbe’s photographs on the press release looked great.

The facade, worked up with locally based CODA Architects, is the last piece of a £150 million, 10-year, hospital-wide refurbishment, ­initiated as part of a scheme to modernise services in the area. If revamps to the site had been invisible from the street until this point, this project was supposed to make them show – a kind of ‘look at me, don’t I look nice’, enhancing the view of the hospital in the public realm alongside a handful of technical improvements to bring performance up to date and manage the original 1970s decaying concrete. That there’s a brand new shiny PFI-funded hospital on the north side of the city that might be more appealing to picky patients than blown out brutalism obviously had something to do with it too.

I guess I got the wrong approach. In terms of its construction and concept Nieto Sobejano’s facade is an interesting project. In essence it’s a glamorous overclad that directly extrudes the rhythms and openings of the existing concrete frame and fins 150mm out in a grey powder-coated aluminium rain screen. The ­cladding enfolds the existing, adding room for insulation and solving the issue of the degrading concrete by keeping the weather at bay while giving the elevation a contemporary look.

‘All the original facade is still there,’ explained CODA Architects’ director Craig Bennett who showed me round. ‘The windows have been replaced because they were 1970s single and secondary glazing and there was only around 15mm of insulation, so the building responded quickly to changes in temperature.’

Covering the entire 100m-length facade along Upper Maudlin Street is a new cladding system of prefabricated hollow column casing, ventilation mesh and fixed panels by specialist contractor D+B Facades. Panels are bolted together; some with recessed coloured strip lighting, and screwed into a railing system hung on the original concrete structural elements. Expansion and contraction issues are resolved by give in the panels. On the upper storeys are 1mm-thick aluminium sheets while the lower levels have 4mm composite for impact resistance. Only the windows have been replaced with double-glazed thermally broken units.

From this perspective the remedial work has brought the building performance in line with current U-values and, as much as possible, was put together from the exterior to minimise disruption and keep the building in use. And the technical improvements should be commended, for the aesthetics and spaces cannot.

Architectural moves to ‘peel away’ the lower three levels are bold, unifying the parts of the building so they can scarcely be recognised as two while slotting in a small garden at one end, and in the competition winning design existing block work was exchanged for full-height elements; cladding, glazing or louvres. But once asbestos removal from the existing spandrels and sills was costed, the full-storey elements were scrapped and the asbestos left sealed in place. To achieve the same effect, explains Bennett, ‘The compromise was to have the windows at the top and panels below treated with a perforated plastic film to make them look as one.’

Grey like the rest, the film acts as a trompe l’oeil so it is impossible to tell one from the other, merging the grey of the window, with the grey of the panels, ventilation mesh and casing.

From the exterior the overall desire to pursue a completely grey facade seems odd, appearing in practice like hoarding; but the more severe problem is what the new facade – in particular the film – has done to the environment inside. The decision to prioritise the conceptual integrity of the exterior affects the users and purpose of the building. Outside views and natural light are known to contribute to health and wellbeing. Daylight and clarity of connection with the outside world from the misfortune of a patient’s hospital bed has been lost. This was the hottest September in 55 years, the skies reasonably clear and representative, and the room we visited was dark and prison-like. Hospitals are stuffy; claustrophobic enough without someone greying over the windows and internalising them even more.

The increased depth of the facade to 400mm only doubles the impact. It does have a new lining that should hopefully reflect some of the lost direct light but, being made of UPVC, one wonders how pristine it will remain over time – problematic considering how often hospitals are renovated. The last facade was there for 40 years. Actually, theoretically, it’s still there.

This tends to be what happens in hospital refurbishments; windows disappear in favour of almost anything. At Bristol, within 15m of the entrance the outside view has vanished, obscured by newsagents selling crisps and chocolate. So daylight, and access to it, is a problem in such spaces anyway – but then to go one step further and reduce the light where it can get through cannot be the right solution, no matter how ‘ugly’ the building is from the outside.

Apparently there haven’t been any complaints – as though that’s the measure for success – but it sounds like those consulted during design development did choose the best prototype on offer. Was clear glass an option? No, and if the architect had got its way, perhaps the windows could have ended up with a sturdier aluminium mesh across them instead. Hardly a fair test.

In context, the thing is that Mediterranean architecture is more about light and shadow, mitigating light ingress rather than encouraging it, whereas in northern climes windows are articulated as windows. One might ask whether there was an architect with more experience in Britain in the competition. There was a local artist among the three architects and three artists invited, but none made it to the shortlist.

While Bennett insists that the difference in light levels is better higher up the building, that too invites the question of why the whole facade got the same treatment. Overall it seems the architectural statement on the exterior trumped any thinking at a detailed level of the experience of the building inside. And let’s face it; few people will understand how difficult and daring it is to create an all grey elevation. What’s more, because the building is so long, the street narrow and the reveals deep, the effect of creating a new kind of homogeneity across the facade cannot be appreciated as a whole from many angles. The glazing may as well be clear.

Aside from this, the point of the project was to make an attractive facade for the city. Yet to top it off the cladding has integral problems with cleanliness that contribute to making it unattractive. In the images – not Halbe’s here for their more realistic quality - it looks pretty good, but when you get close the aluminium encasements have smears of dirt and pollution from the passing busy road, and cigarette butts and rubbish is amassing between the entrance and the freestanding screen which crosses in front. Just as well the whole thing didn’t end up being white as per the competition proposal.

It’s as though the architects and those involved had downplayed some of the principles of modernism in architecture; that form follows function and a building should speak of what is happening inside – let alone the light, air and openness of Sant Pau’s mentioned above. Remember modernism had clinical origins too. In one grey sweep, the film obliterates all this and is part of an idea that is more artistic than architectural. Perhaps this reflects the fact that the competition organiser Willis Newson is the hospital’s art co-ordinator. My only hope is that the film can be removed, but if it ever is what will unfortunately be revealed is a facade that barely looks different to the one it replaced.