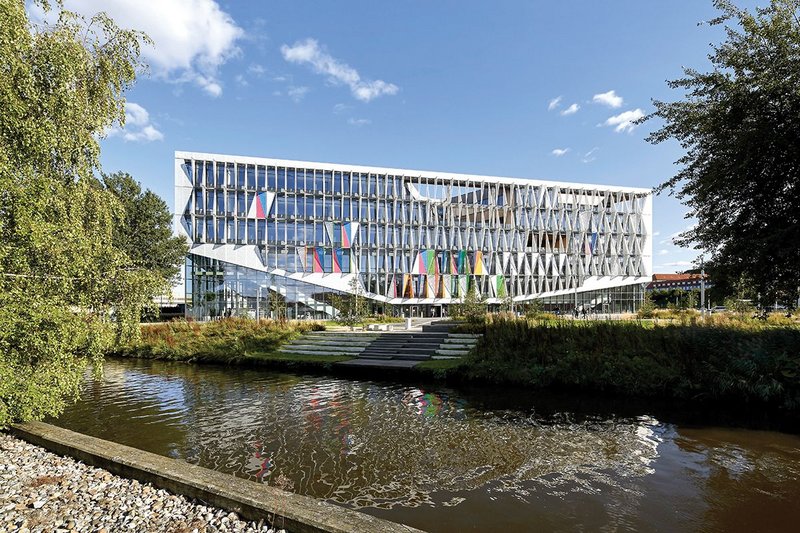 Overlooking a nearby river, the south face of the Kolding campus makes full use of its dynamic facade of triangulated panels. Credit: Hufton & Crow

Watching a timelapse video of the Campus Kolding building at University Of Southern Denmark (SDU), designed by Henning Larsen Architects, feels like observing the movement of an obscure timepiece engineered by an ­advanced alien civilisation. As the seasons change and the sun rises and dips in an arc across the sky, the building’s three metal facades, made of hundreds of shutters, move in varied patterns like a kaleidoscope of butterflies about to take flight.

Though worthy of a sci-fi novel, the mechanical facade is in fact a form of dynamic solar shading, comprising over 2,000 sensor-controlled perforated aluminium shutters, which adjust to changing daylight and heat levels, and the behaviour of users inside, to create a comfortable working environment.

The system is part of an ambitious environ­mental strategy involving a range of passive and active systems, designed to cut overall energy demand by 50%  compared to buildings of a similar type in Denmark, and reduce annual energy consumption to just 36 kWh/m2/year.

A triangle motif permeates almost every aspect of the 13,700m2 building, in which more than 2,500 students study communications, design, linguistics and culture courses, alongside 109 full time staff.

Designed to orientate the building towards three key local landmarks simultaneously – the harbour (Kolding is a major seaport in Southern Denmark), train station and the adjacent river – the triangular plan also reflects the geometry of the site. And by avoiding the need for an orthogonal building, it leaves space for a new plaza, shared with two other educational institutions.

Each of the five storeys divides into a series of smaller equilateral triangles, angled in different directions to define spaces for a ground floor lecture theatre and cafeteria, and classrooms and offices on upper floors.

A five storey atrium is created from triangles cut into floor slabs and offset or rotated by 60˚ to give the impression that the space twists as it rises towards a triangular skylight. The rotation opens up different vistas from balconies lining the atrium edges, which are used as informal lounge and study areas.

Arranging the shutters of the kinetic facade across a galvanised steel frame that stands apart from the main building extends the three-sided symphony. The frame projects 600mm from the weathertight main facade and functions as a maintenance service corridor.

Each of the shutters is either fully movable to an angle of 0-90˚, or fixed at a 30˚, 60˚ or 90˚ angle, depending on location. Shutters on the south and northeast elevations are moveable except for those that offer shading to the toilets, two staircases and in front of terraces, where they are fixed to either 30˚ or 60˚. Fewer shutters are installed on the northwest elevation, which has a lower heat load and is used less in the evenings. They are mainly fixed at 90˚ to the facade except for over the classrooms.

Peter Koch, project manager at Henning Larsen Architects, commented: ‘We wanted to create a building that changes throughout the year, becoming more open in the winter time, when there is less daylight, or more closed in late spring, when the sun is low, or at other problematic times of year, in terms of solar control. This reduces the heat load on the building, cutting the cooling requirement and energy consumption.’

He continued: ‘The fact the moveable elements can stand at any position from 0-90˚ creates a rather varied expression on the facade, so we decided to introduce the fixed shutters to underline this expression.’

Sensors positioned around the building monitor internal heat and light levels and feed the data into a central building management system. The BMS triggers small electric motors, hidden at the base of each shutter, or between pairs of adjacent shutters, moving them to fully open, closed or positions in between.

Although the shutters are controlled by electric motors, energy consumption is minimal as they move gradually and remain in one position for several hours at a time, says Koch.

In the classrooms, users can manually override the shades, a measure intended to increase their sense of control over the environment. However the extent of user control must be limited in use to reduce the impact on the building’s overall energy consumption.

Even fully closed shutters admit a controlled amount of natural light through a pattern of keyholes punctured through the aluminium. Many are linked together to create openings resembling amoeba or bacterial growth.

‘The shutter system had to seal the building off from the sun, but be transparent enough to allow students to see the surrounding area, and people outside to see activities going on inside the school, at least during darker times of the day, when the lights are on,’ said Koch.

A number of shutters on the plaza elevation form part of an artwork by German artist Tobias Rehberger, themed on time and emphasising the building’s dynamic, seasonal nature. Shutters in three colours close or open to indicate 1 minute, 10 minute or 60 minute intervals making it possible to work out the time of day.

Campus Kolding is the first university building in Denmark to meet stringent energy consumption demands described in 2015 building regulations and includes a range of other innovative sustainable technologies. 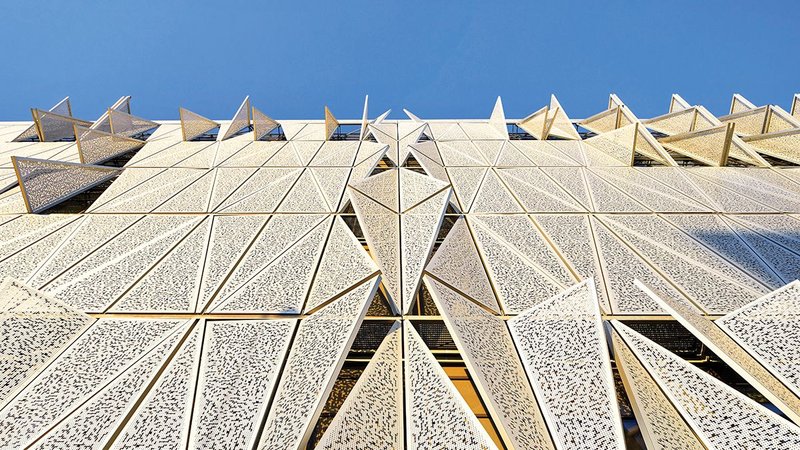 The building functions as a live research project into the effects of increasing concrete surface area on thermal mass. The undersides of concrete slabs in classrooms have cast-in rows of ridges, designed to boost their surface area and generate a 16% gain in thermal mass capacity, reducing the building’s cooling requirement. Results of this research are still being assessed.

Installing vacuum insulation on the backs of the windows enhanced the thermal performance of the facade, explained Koch: ‘Although it was expensive, we calculated that its performance was 10 times better than traditional insulation and it massively increased the available floor areas. The technology has not previously been used in Denmark’s building industry, but it is safe and can be easily integrated into a facade system.’

Campus Kolding’s roof is installed with a 400m2 solar PV array and a 20m2 solar thermal array. The building also plugs into an aquifer thermal energy storage system, comprising two 25m-deep groundwater wells, designed to provide a renewable source of heating or cooling, depending on the time of year.

It’s another example of how this advanced sustainable building is able to react to the changing seasons and daily cycles of light, dark and heat.