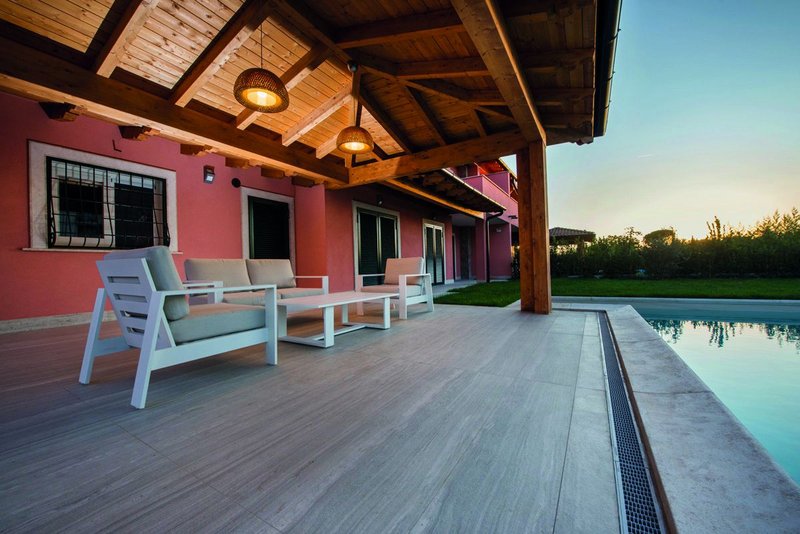 ‘House in Roma’, was borne out of a desire to bring the glamour of an Italian countryside villa into the heart of Rome.

Approaching this project, architect Pierluigi De Gasperis was fascinated with the dual principles of continuity and contrast. He wanted to include both concepts into the final designs of the structure’s interiors.

Using their considerable artistic expertise, De Gasperis’s team of designers mixed and matched colours and textures to achieve a contrast and enhance the overall atmosphere of the interior. But the greater challenge lay in his ambition to capture the essence of continuity.

Initial inspiration came from the local abundance of travertine stone, which combines subtle grey-white tones and delicately undulating veining. The desire was to incorporate this style throughout the villa’s flooring. However, naturally hewn stone is notoriously hard to fabricate into a continuous grain, due to its unpredictable and spontaneous patterning.

Rather than making him change tack, this encouraged De Gasperis to consider alternative materials in order to achieve the fluidity that was so central to his imaginative design.

Silver travertine is a dramatic stone, full of character, and was central to the overall aesthetic of the house.

Travertine, widely found throughout both classical and modern architecture, was highly prized by the ancient Romans. Marked by its characteristic veining or strata, it is a material with deep affiliation to the Lazio region in central Italy.

The luxuriant villas nestled in the Alban Hills, which fringe Rome, have long used carved Travertine for both structural and decorative purposes. It is these corresponding attributes that influenced the architect when he drew up the initial concepts for ‘House in Roma’.

‘We wanted to ingrain this house with personality and history’, says De Gasperis. ‘Travertine’s prolific use in architecture over the last 2,000 years and its timeless ability to evolve and adapt in-line with a specific style or movement made it an attractive choice. Its visual appeal and association with grandeur made it highly desirable.’

De Gasperis continues: ‘However, the permeability of natural travertine makes it susceptible to staining, especially from acidic substances, even seemingly innocuous, everyday liquids such as orange juice. Neolith® Strata Argentum provided a welcome solution. Its faithful interpretation of travertine made it the perfect choice for this project: the robustness required to meet the wear and tear associated with the modern family house, and the beauty and authenticity of the real stone. Importantly, we were able to design around the Neolith slab to create the consistency in veining we required.’

Rome is globally renowned for its impressive sculptures and iconic stone monuments. Paying homage to the skilled artisans of the city, the ‘House in Roma’ floor is a masterpiece in fabrication and the centrepiece of the project. It is a feature in its own right, a vista of travertine, stretching beyond the threshold of the house, emphasising continuity.

As a result of the clever and meticulous fitting by top fabricator Stone Arredo, the villa’s flooring creates a mesmerising illusion of fluidity. Rapturously flowing from staircase to ground level, out of the threshold and onto the terrace into a panorama of Strata Argentum, it provides a seamless connection between the inside and outside of the building. The surface’s silvery striations pleasantly stretch out to ultimately envelop a pool that incorporates the subtle, sandy, sun-soaked shades of Neolith’s Arena.

Commenting on the significance of the project, and how it relates to the brand’s own activity, Neolith’s Mar Esteve Cortes says, ‘When our Italian distributor, Domus Marmi, came to us with this project and described the concept we were very excited. We felt the material chosen and the required precision within the design would present a tantalising challenge for the fabricators. If the ambitious plans could be realised, they would create a highly individual interior full of character. As one can see from the finished floor, the results speak for themselves; it really showcases the potential of Neolith.’

A question of balance

A key principle within the world of art is that contrast should, fundamentally, be complementary. It must serve to augment perceptions, creating harmony as opposed to discord.

When colours are contrasted effectively within an interior, they can offer either a backdrop emphasising certain features, or stand alone to become the unifying element, bringing a whole room together.

In addition to ensuring a high degree of continuity throughout the house, the designers were also keen to provide focal points within the property through an interesting and diverse use of matt earth colours and natural effects.

The second bathroom features the rustic look and feel of wood against lavish and lustrous marble. Neolith’s La Boheme B01 and La Boheme B02 used in conjunction with Calacatta Gold establishes a minimalist décor, which is refinement embodied.

The clever use of material patterns and textures within these two rooms amplifies the space within, creating a captivating visual equilibrium which excites and entices.