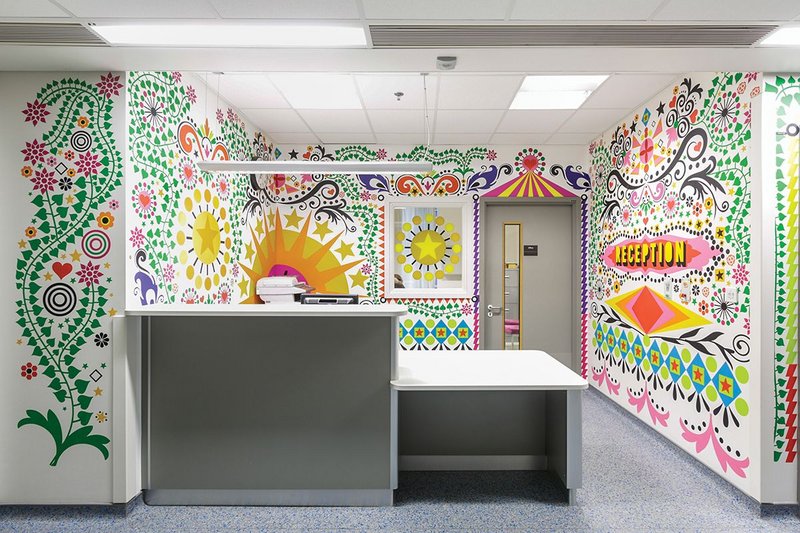 Fuelled by a broader NHS trend towards specialisation of hospitals, a number of major new paediatric hospitals and expansions are now under way, embracing the non-institutional, patient-centred and art-rich approach typified at Evelina.

‘A children’s hospital is not an adult hospital with murals on the walls. But most children’s hospitals were just that,’ says Alastair Gourlay, director of asset management at Guy’s and St Thomas’ NHS Foundation Trust (GSTT), who was project manager for the Evelina.

With its creative use of colour, natural light, planting and connections to landscape, Evelina led the way in creating a less clinical hospital environment focused on reducing stress all the way to the door of the operating theatre.

Gourlay sees such improvements in paediatric design as part of a trend of generally improving healthcare environments.
‘Hospital design is becoming more patient experience oriented. There’s much less hospital-as-a-machine going on and much more focus on what it feels like to be a patient,’ he says.

‘You have to put yourself in the mind of a child and of a parent. That’s such a creative place… In terms of design, a lot can be done,’ he says.

So what are the specific issues for designers of paediatric environments? The main additional requirement that has become the norm over the last decade is overnight accommodation for relatives in the same room – generally pull-down or sofa beds. Another is wider provision of play areas, in waiting rooms and on wards.

A more profound change has been the emphasis on creating less stressful environments for both the child patient and for families and friends who may accompany them – an extended entourage specific to children’s hospitals.

Central to this is the increasing understanding that atmosphere is key to patient stress and aiding recovery. Though not exclusive to children’s hospitals, this is particularly important to that age group and their parents.

‘In waiting areas, if the child is distracted and happy and playing while they are waiting, the parents are more relaxed,’ said Gourlay. ‘The key thing is that children are running around and having a good time. That’s much better than sitting in a quiet waiting room.’

This thinking may result a generous and engaging reception/centralised waiting area with cafés and play areas that encourage children to be active and provide vital distraction – an arrangement that also allows hospitals to make more intensive use of their consulting rooms.

‘A characteristic of children’s hospitals is that each patient brings a lot of people with them – parents, siblings, grandparents... so you need to think not just about them but others too. You need more space and need to make waiting areas attractive,’ he says, adding that to get this generosity of space the environment must work harder by doing more than one thing.

At Alder Hey, for example, the key element is the 90m-long ‘heart space’, a public hub overlooked by clinician meeting rooms on upper levels. This multi-purpose concourse is the main waiting and circulation area, and incorporates communal services, cafés, a performance area and space to play. In doing so it embodies, says Zucchi, the most positive aspects of a shopping centre in terms of buzz and convenience. Crucially, those approaching the hospital will being able to ‘sense’ its relaxed atmosphere through glimpses inside, reducing stress before entering. ‘Out of a very utilitarian brief we managed to get a very generous space,’ he says. ‘Every square metre is justified.’ 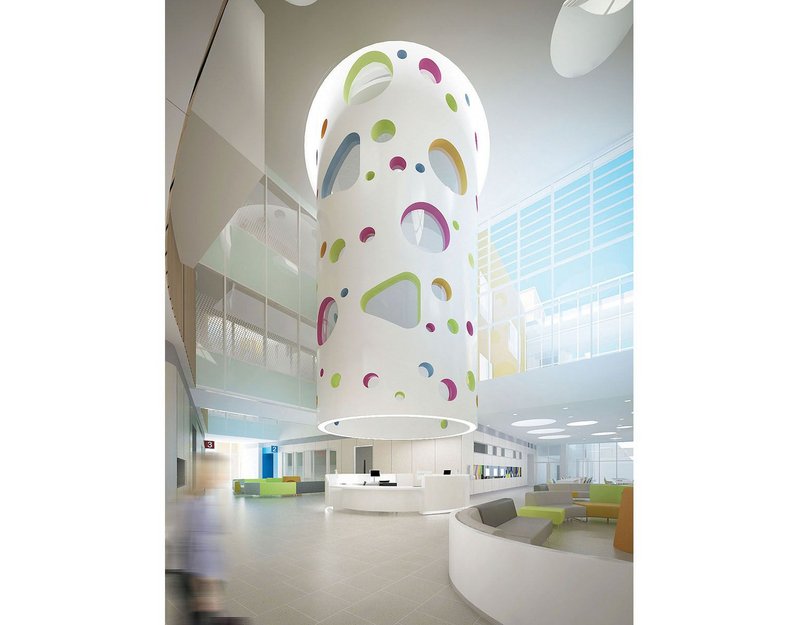 The sculptural ‘playtube’ in the foyer of Sheffield Children’s Hospital creates a heart for the 8000m2 building and a play space at every ward level.

At Sheffield Children’s Hospital, Avanti is aiming to create a pleasant and lively atmosphere in its new entrance atrium, which incorporates a sculptural ‘playtube’.

‘People are expecting more of their institutions...You’re looking to create something lively to raise the spirits,’ says Mary Reid, senior interior designer at Avanti. ‘Our thinking was to make it feel quite different from a normal hospital when you entered, and to really signify that it was for children...We wanted it to be very colourful and not too intimidating with lots of activity.’

The main tools are light, views and colour – Sheffield uses more colour than any project she’s been involved in, and isn’t limited to more public areas. Even in clinical spaces, she adds, Avanti tries to find space for a colourful intervention – if not on the wall then perhaps a brightly-coloured floor, or maybe a spotty laminate on the plumbing duct behind the clinical basins.

Tone is vital – University of Sheffield research found that even children as young as seven found hospital environments too babyish, according to Reid. ‘Children have become much more visually articulate and you have to go with that,’ she says.

‘It has to embrace all ages,’ says Pamela Bate, a partner at Hopkins, which is designing a Research and Education Building at Alder Hey. And while sociable, energizing spaces are hugely important, they aren’t all that’s appropriate, she adds: ‘Teens have different demands. They might like a dark space to go into.’

Catering for all ages

Catering for different ages of children and not neglecting teenagers is a key issue through both the provision of recognisable spaces for them – as at Alder Hey – and the imagery used. Wall illustrations, designed by Neasden Control Centre for the Royal London Hospital’s children’s dental ward, incorporate teenage-focused urban images and skateboards for example, as well as imagery to appeal to younger patients. At South Glasgow, the need to appeal to all children including teenagers was partly behind an art/wayfinding programme using Corian organised by art consultant Ginkgo Projects.

‘One of our provocations to ourselves was: What’s a Goth going to think about this,’ says project manager Chris Fremantle, adding that while you might not always appeal to everybody, ‘you can ensure there’s something for everyone’.

The artwork, created by a team including artist Rachel Mimiec and designer Graphical House, drew on interviews with staff to create landmark installations to assist in circulation in addition to providing the welcome aesthetic distraction of the designs and their integral text.

Art is playing an increasingly vital role in creating an attractive ambience at children’s hospitals, particularly in new builds where architects have been able to collaborate early with the artists. As BDP’s Zucchi says, ‘the arts programme can be the highlight of the building’ – and just one way that the environment can be designed to help take the minds of patients, and their families – off why they are there. At Alder Hey, for example, concourse artwork includes interpretations of Roger McGough poems by calligrapher Pip Hall.

This distraction factor is eloquently demonstrated at Royal London Children’s Hospital where Barts Health NHS Trust’s arts organization Vital Arts commissioned six artists and designers to create site-specific artwork for wards and circulation routes. ‘It’s well-documented that children visiting hospital find it very frightening and having good quality design and art provides an uplift in the quality of experience,’ says Vital Arts acting director Catsou Roberts. But this should not, she says, be anodyne ‘happy-happy’ art, adding that Vital Arts is committed to ambitious, high quality work that enhances patients’ and visitors’ cultural experience:  ‘You have to take a risk and push boundaries.’

At the Royal London Children’s Hospital these highly engaging interventions include Morag Myerscough’s Come On In, a vibrantly colourful and ornate hand-painted installation on the ward walls, inspired by a trip to Delhi.

‘The whole aim of the piece was to help to bring some joy to the young patients and parents with colour and some fun that would be warm and welcoming,’ said Myerscough.

Current thinking in ward design in children’s hospitals reflects general healthcare trends as well as presenting particular considerations. Although the effect of environment on patient recovery is notoriously hard to quantify, healthcare design expert Roger Ulrich’s well-documented research on the beneficial effects of views of nature is increasingly referenced in hospital design. At Evelina, Hopkins maximised views to the external landscape, and at Alder Hey BDP is ensuring that every child will be able to see green space from their room.

Sociability is another factor. According to Christopher Shaw, it’s important that the design helps keep language and social interaction going, and give children the feeling of choice – in organising their bedroom, where they eat, etc.

Ward design at Alder Hey, where 70% of the patients will be in single rooms, encourages visibility and sociability with full height glazing, shallower rooms to avoid isolation from the corridor, and mini-‘heart’ play spaces – one per eight bedrooms – plus covered balconies for socialising.

At Sheffield Children’s Hospital, windows go down to the skirting ‘so that even a crawler can see out,’ says Avanti’s Reid.

‘Visibility is perhaps more important with children, with more visibility into corridors,’ she says, adding that as ever in all hospital environments there needs to be a balance between privacy, dignity and observation.

What of the future? Child patient numbers are significantly increasing – at the Evelina for example, GSTT is preparing to appoint a design team for a 50% expansion. Alastair Gourlay of GSTT expects increasing use of digital technology, for example meeting consultants via Skype, to mean that hospitals of all kinds move beyond purely architectural solutions. ‘The way healthcare is going is less about the buildings – more and more we’ll be relying on technology to support healthcare systems,’ he says.

Meanwhile, however, as footfall increases it’s more important than ever that the physical design of paediatric facilities – distracting, playful and engaging yet robust, efficient and clinical where it matters – is up to the job.