It’s a complicated area but one that is essential to get right. Dow looks at the pitfalls and offers some guidance 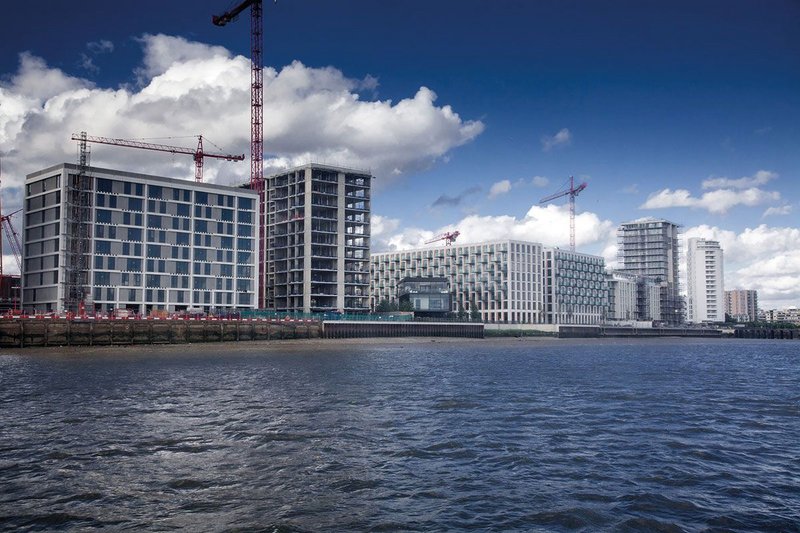 Credit: 34000sqm of XENERGY™ SL and XENERGY™ MK by Dow is being used at Royal Wharf in London. It is the single largest project that Dow has worked on in the UK

With increasing focus on the realised energy performance of buildings, rather than just the designed performance, the robustness of U-value calculations is of paramount importance in ensuring that a beautifully sculpted structure performs as well in reality as it did in computer models.

The importance of U-values to long-term energy performance means there is an array of tools to assist with calculations, making the task fast and relatively simple. Undoubtedly, anything that helps make a job easier is to be welcomed. However, it is crucial that we do not overlook some of the unique aspects of inverted flat roofs, which could potentially lead to misleading calculations.  Even with the most sophisticated suite of tools at our disposal, we will get unreliable and unrepresentative figures if the information input is incorrect.

The location of a building obviously affects energy performance – we all know that two identical buildings, with identical U-values, built in different climates would produce dramatically different results. But might the U-value calculation itself be affected by these factors? For example, differing rainfall levels have an impact on the rainwater cooling effect.

Placing insulation above the waterproofing layer during inverted flat roof construction, rather than below it, as in traditional warm roof construction, provides many advantages. However, it also introduces rainwater cooling as an additional heat loss mechanism. Heat is removed from the building fabric as the water flows beneath the insulation boards on the roof and down a drainage outlet.

Rainfall can vary by as much as five times from the driest to the wettest locations in the UK. This has a considerable impact on the rainwater cooling effect seen in inverted flat roofs.

As the volume of rainfall increases, so does the amount of heat that is removed from the building. Therefore, a correction (Delta U) needs to be factored into the U-value calculation to account for the differing effect of the average rainfall in a building’s location and the subsequent percentage of that rainfall that reaches the roof’s waterproofing layer. The method for calculation to account for rainwater cooling is specified in BS EN ISO 6946:2007.

European Technical Approval Guideline (ETAG) 031-1 stipulates that 75 percent of rainwater can be assumed to flow underneath edge-profiled interlocking boards for calculation purposes. This is obviously a substantial proportion of the total rainfall. However, water flow can typically be reduced to around five percent with the addition of a water control layer - not to be confused with the waterproofing layer - on top of the insulation and beneath the ballast. This significantly reduces the penalty (Delta U) otherwise calculated.

Delta U becomes increasingly important as U-values become smaller. It is particularly important for the low U-values that can be achieved today using leading XPS products like Dow XENERGYTM SL.

Approximately 90 percent of the thermal contribution to an inverted roof’s U-value comes from the thermal insulation.

Accounting for difference between design and declared lambda

The thermal conductivity of all insulation products has an intrinsic degree of variability, which is accounted for through statistical analysis of European Products Standards thermal test results, providing a reliable and consistent approach. The ageing of materials is also considered, adding to the robustness of thermal conductivities used in subsequent calculations; the ‘declared’ lambda value. BS EN 13164 specifies the process for generating the ‘declared’ lambda of extruded polystyrene (XPS) insulation such as Dow XENERGY™ SL.

The declared lambda value is sometimes referred to as the 90/90 value – ie 90 percent of production achieves the quoted conductivity value with a 90 percent confidence level. Architects frequently use declared (90/90) values as a design value as they factor in performance over an expected 25-year lifespan.
However, additional correcting factors need to be incorporated into the calculation of the declared (90/90) value for inverted flat roofs, accounting for the unique end use conditions. This entails an assessment of each of the individual materials comprising the construction element, based on their thermal resistance, which can be derived from their thermal conductivity and thickness.

Approximately 90 percent of the thermal contribution to an inverted roof’s U-value comes from the thermal insulation.
Diffusion and freeze/thaw rates are used to determine possible water absorption over time as specified by ETAG 031-1. These two particular mechanisms are used because the efficiency of thermal insulation is affected by the amount of moisture it contains, meaning correction factors cannot be calculated until moisture levels have been determined, as outlined by BS EN ISO 10456.

Manufacturers of proprietary materials should be able to provide accurate information for the calculation. In lieu of guidance from manufacturers, it may be acceptable to use generic information for the materials. Regardless of the approach, confusion about the thermal conductivity value used for the thermal insulation material must be avoided as an overwhelming majority of the total thermal resistance that contributes to the final U-value is down to the thermal insulation layer.

On inverted flat roofs the fact that the waterproofing layer is on the warm side of the insulation boards reduces the possibility of interstitial condensation, as it acts as an efficient vapour control layer. The risk of surface condensation is also relatively low because the boards maintain the roof’s waterproofing close to the building’s internal temperature.

While the risk of condensation is considerably reduced it has not been eliminated, and the potential for other physical mechanisms to contribute needs to be considered. Sudden drops in temperature, causing condensation, can be the result of the rainwater cooling effect, where rainwater flowing beneath the insulation boards removes heat from the roof structure.

Rainwater cooling condensation is a phenomenon that can happen both in the summer and winter months.
The significant thermal inertia of concrete decks is at minimal risk of interstitial or surface condensation because of the duration and extent of deck cooling. The same cannot be said for lightweight decks which, without adequate mitigation measures, face significant risks.
Design constraints may prompt architects to contemplate placing some insulation below the deck within the ceiling void, diverging slightly from the inverted flat roof concept where all the insulation is above the waterproofing layer. Without adequate care, the resulting increase in thermal resistance below the waterproofing layer increases the risk of condensation forming.

It is widely recognised that effective inverted flat roof designs require that the lion’s share of the insulation must be placed on the exterior of the building above the waterproofing layer. It is also incredibly difficult to identify the tipping point where condensation effects will emerge. Ventilation of the insulation layer within the building cannot offset the increased risk as it would render the roof insulation.

There is more than meets the eye when calculating U-values for inverted flat roof systems. However, guidance is available to help ensure we all get it right – and to help protect the reputation of the building industry as a whole.For assistance with making or reviewing U-value calculations for inverted flat roofs, and information on relevant correction factors contact Dow Building Solutions’ technical helpdesk.