With government action to curb construction’s contribution to climate change falling short, some in the sector are taking matters into their own hands 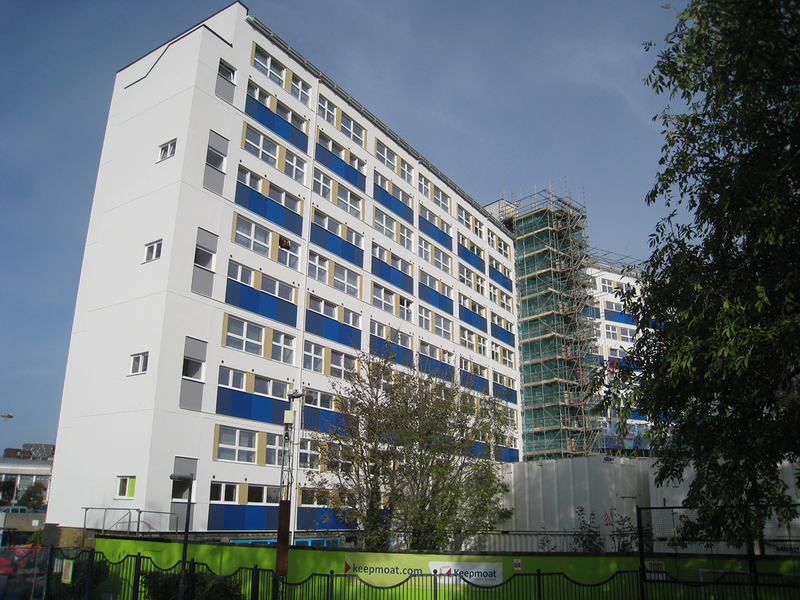 Climate change was one of many battle grounds for the parties in the run up to the December general election. Though welcome, politicians’ pledges to make the UK’s existing homes more energy efficient and resilient were viewed with some caution, given the lack of recent political will and the disappointment over past government initiatives such as the Green Deal.

Almost a year ago, the government’s independent adviser, the Committee on Climate Change (CCC), warned that the UK’s legally binding climate change targets would not be met without the near-complete elimination of greenhouse gas emissions from buildings. Emissions reductions from the UK’s 29 million homes had stalled, it reported, noting that ‘current policy is failing to drive uptake of energy efficiency in existing homes.’

But even without national policy and a developed market, some in the sector have been working to foster the kind of deep housing retrofit the UK needs – addressing barriers in such areas as finance, installation, performance, monitoring and resident and supply chain engagement. The projects and initiatives under way in the UK today are relatively modest in scale, but they are foundations on which the sector is building knowledge and trust.

In 2012 the government’s Green Deal sold homeowners the vision that the cost of home retrofits could be covered by savings on energy bills. That deal was doomed, but a year later the Netherlands showed how it could work with Energiesprong. The Energiesprong standard enables net zero energy retrofit, paid for by the ensuing 30 years of savings on energy bills, and is based on a 30 year performance guarantee, which is confirmed by ongoing monitoring. The performance guarantee is broad ranging, covering maintenance, energy costs and consumption, comfort (set at a temperature of 21ºC for living areas and 18ºC for bedrooms), internal air quality and noise, and kerbside appeal. Energiesprong retrofits are also carried out without displacing residents and to efficient timescales – in the UK the target is 15 days per home but more experienced contractors in the Netherlands can retrofit a home in a day.

In three years it has been applied to 100 homes in the UK, mostly with the help of grant funding and all for social housing clients. In 2020, however, it will shift up a gear, with more than 1,000 homes in the pipeline, including retrofits self-funded by social landlords. It will deliver its first projects in the London mayor’s Retrofit Accelerator programme, which is targeting 1,600 whole house retrofits in Greater London. ‘It has always been the aim to make this commercial here, but to do that we have to help build the industry,’ says Ian Hutchcroft, head of market development at Energiesprong UK.

To that end, in November it launched a competition for consultants, contractors and service providers, setting challenges for low rise apartment blocks. ‘They are opportunities for the supply chain to form solution provider partnerships and invest in R&D, so when projects come to tender, providers are in a good place and the costs of tendering are reduced,’ explains Hutchcroft. ‘We need an industry that can build product cost-effectively.’

The challenge is similar to that faced by the offsite new build sector, but that has government backing that retrofit lacks. ‘Government could help us by providing a very small amount of capital funding,’ says Hutchcroft. ‘There’s a sector deal to be done here.’ That has to be based on deep retrofit, rather than piecemeal interventions like insulation, argues Hutchcroft, for business reasons as well as to hit environmental targets. ‘We can’t do this by retrofitting homes incrementally – that won’t work technically or financially. It has to be done through a whole house approach that delivers net zero in one go, because that gives the space to make it work.’

The UK’s first Energiesprong homes include five semi-detached houses in Mundon Road, in Maldon, Essex, owned by housing association Moat Homes. They are a microcosm of the nation’s housing stock and its idiosyncracies. Conventional and identical from the front, the homes have various rear extensions. ‘We had to react to what was going on with each home,’ says John Pratley, associate with Gardner Stewart Architects, which worked with contractor and energy supplier Engie on the project.

The architect advocated using the Passivhaus EnerPHit approach to deliver the Energiesprong net zero target and performance guarantee. ‘We didn’t have to use it to meet the Energiesprong performance specification, but the Passivhaus Planning Package (PHPP) modelling helped justify the measures and their energy and carbon savings to the client,’ says Pratley. That package cost around £75,000 per home for these initial pilots and included overcladding homes with Mauer’s prefabricated, super-insulated facade system and installing FactoryZero energy pods, containing electric powered air source heat pump, hot water storage cylinder, mechanical ventilation with heat recovery unit and photovoltaic electrical converter. The energy pods were docked onto the rear of the homes because, explains Pratley, ‘The homes were so compact there was no room for the extra kit inside and we could also replace and maintain services without disturbing residents.’

Pratley says his first experience with Energiesprong was positive, and that the use of  Passivhaus alongside gave confidence. ‘As a designer, I would be nervous about going down a route that wasn’t so considered,’ he says.

The benefits of bringing Passivhaus to domestic retrofit are echoed by James Traynor, managing director of ECD Architects, which Portsmouth City Council employed to design the retrofit in the refurbishment of Wilmcote House. The project was subsequently delivered by contractor Engie and its architect Gardner Stewart. Monitoring by Southampton University showed a significant increase in thermal comfort and reduced energy use, while a study of social impact of the work by the London School of Economics for Rockwool found the overall project cost was cheaper and less disruptive than demolition and rebuilding. ‘ECD had worked on many tower block retrofits before and always tried to exceed Building Regulations, but the EnerPHit methodology and standard helped us understand performance far better,’ Traynor says. ‘The beauty of the approach is that, like Passivhaus for new build, it brings a more robust and reliable measurement methodology. SAP is very crude in comparison.’

ECD now routinely incorporates Passivhaus into all its feasibility work, and clearly advocates for the standard – confirmed by Traynor’s authorship of a newly published book on EnerPHit intended to build broader industry understanding. ‘Although most Passivhaus and EnerPHit projects are domestic – perhaps due to consumer demand – it is ironically harder to achieve than in larger buildings, due to the relatively high wall to floor ratio,’ points out Traynor. He believes Passivhaus and EnerPHit are particularly appropriate where a client has a long term interest in building performance and stewardship of their assets, as in social housing.

Standards alone, however, are unlikely to win over the ‘able to pay’, homeowners who could be retrofitting their properties, but aren’t. ‘For homeowners decisions about their home can be highly emotional and personal,’ says Marianne Heaslip, associate principal at URBED. Over the past decade or so, URBED has worked with Manchester social enterprise Carbon Co-op to develop community-led routes to retrofit. Their latest initiative, appropriately named People Powered Retrofit, is one of six pilot projects backed by the Department for Business, Energy and Industrial Strategy (BEIS) that explore ways to develop local homeowner take-up and supply chains in energy efficiency retrofit.

Focused on Greater Manchester, People Powered Retrofit has researched its market, potential deep retrofit service and the needs of the supply chain. The supply chain wanted training away from classrooms, such as peer learning networks, while homeowners sought help in steering a course through the retrofit process. The resulting service is, therefore, comprehensive, having the functions of retrofit adviser, energy assessor, retrofit co-ordinator and service manager – some suited to sole practitioners and small practices, who could fulfil multiple roles.

The service starts with a whole house assessment, using the My Home Energy Planner tool developed by URBED and Carbon Co-op. Based on SAP, taking on board the PAS 2035 standard and including consideration of ventilation, the tool presents three costed retrofit scenarios; the last is the most ambitious, possibly extending to EnerPHit. ‘Generally we want to get to the AECB Building Standard, with a focus on reducing space heating demand,’ says Heaslip. ‘Assessment is tailored to the homeowner, so if they want a loft conversion we will identify interventions they could add alongside.’

The service will work in up to 11 target neighbourhoods in this pilot programme, building on Carbon Co-op’s track record of engagement in the region. The research identified neighbourhoods of around 30,000 homes as having critical mass of local builders and suppliers, as well as householders, explains Heaslip. ‘A lot of people doing retrofit are community minded – they may be active in their local church, for instance. Disseminating information on what people are or could be doing to their homes works at that kind of level.’ Ahead of advertising the service, around 15 householders were waiting for their assessment – which costs £500 – with around five new enquiries coming in every month.

The service does not promote particular systems or products but provides names of local builders and other consultants, including architects, says Heaslip. ‘Part of the co-ordinator’s job could be to tell a householder they’d benefit from an architect’s advice and supply names.’

This is a hyperlocal answer to a national question, but it addresses the negativity engendered by stop-start government initiatives, poor quality installations and rogue traders, and could be scaled up across the country. ‘There is scepticism in householders and in the supply chain, where companies invested in accreditation but work didn’t flow. That’s an important reason to build this up in a more organic way,’ says Heaslip. ‘The Green Deal promised a mass market but didn’t work. This is based on local action and learning as we go. The idea is that it’s modular and replicable, so we can scale to suit resources.’ What this and other retrofit initiatives now need in order to scale up is a steady and supportive political hand.