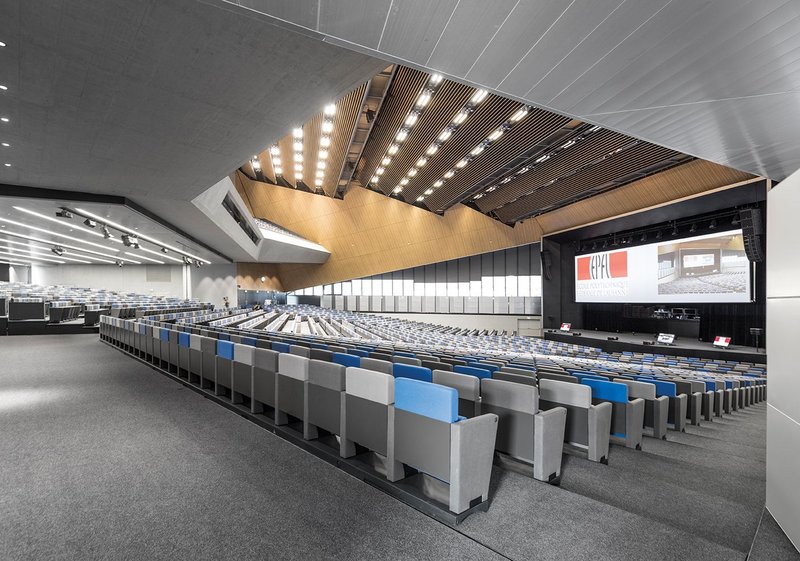 Opened this May as the latest part of the École Polytechnique Fédérale de Lausanne’s campus, the huge €110m Swiss Tech Convention Centre had to work both as a large lecture hall for the EPFL’s students, and as a flexible space for private conferences and symposia – an income generator to offset the sizeable initial outlay. As part of that, local architect Richter Dahl Rocha and Associates looked to Gala Systems to help create a 3000-person auditorium whose seating could be subdivided, reconfigured or completely opened out – all within a matter of minutes. The €10m contract, the largest the firm has yet completed, includes both a system of skyfold vertical partitions that can be deployed to divide the space, and an automated platform and seat rotation system installed across the whole floor. This not only allows for a number of raked configurations, but means the lot can be inverted and stored under a perfectly flat floor when not required. 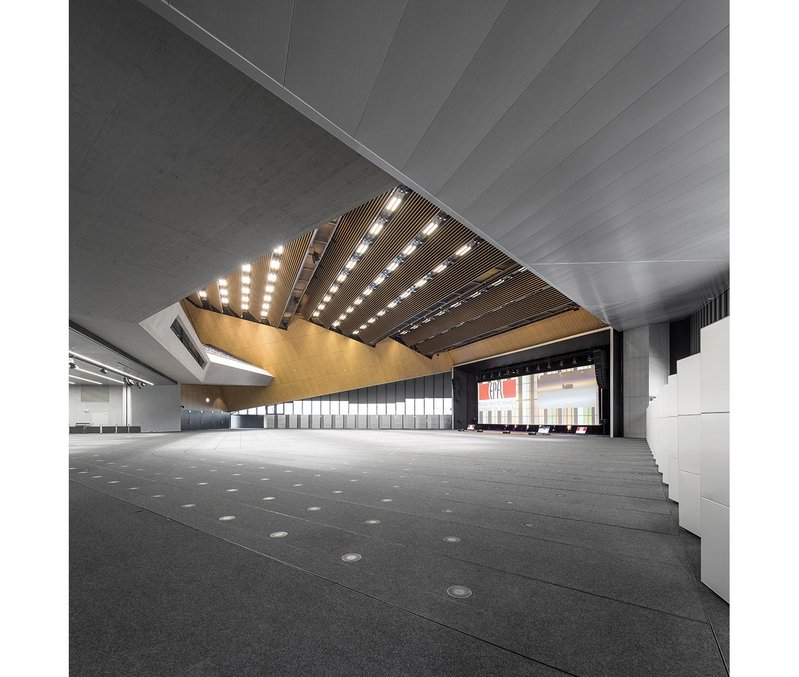 To do it, the design team was involved from initial design stages. ‘It depends on the specifics of the project, but the underfloor concrete pit to hold the folding seats and the mechanism is typically 1.6m-1.9m,’ says Gala project manager Philippe Desmarais. ‘It is is driven by a gear system on a sheet metal box sat on a rotating shaft and a gear motor with connective couplings.’  Key to the action is the ‘Spiralift’ device – originally designed as a power lifting actuator for orchestra pits. When a row is raised, seats start to rotate to their deployed positions. Moving into position, the seat rotation assembly is held rigid by a locking torque, which also holds the seat base down on the platform once deployed. The 3000 seats took 10 months in all to install, including a period for fine-tuning the system. The five-year warranty, given the initial outlay, might raise eyebrows, but Desmarais says that with the nature of the mechanism, any problem will manifest itself well before then.

Since the venue opened in May, Desmarais says that on average the space has been reconfigured at least once a day – suggesting that the Swiss Tech Convention Centre is going to be playing musical chairs in its auditorium space for a good time to come. 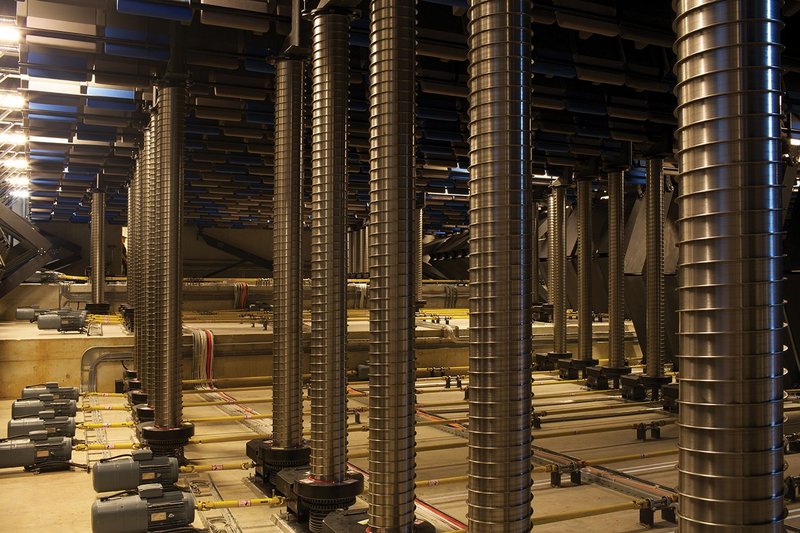 Gala Systems’ ability to rapidly deploy or hide thousands of seats at a time in events venues is predicated on its patented Spiralift technology. This involves a coiled, flexible, flat steel spring that expands with the insertion of a thin, vertical spiral steel band to create a fully stable column – the size of which is dictated by design geometry and loading demands.

In a typical application, Spiralift columns raise every alternate row of a seating platform with their stable, self-guiding system, making spaces flat or tiered in minutes. Independent rows of permanent seats are hinged to the floor and screwed to steel members supported by the Spiralift device. These columns raise every row of seating with the help of self-guiding hinges, scissors and contact guides. Rows are then configured to any desired step or level using touch screen or hand held controls – with all components designed to ensure the system’s rigidity at any point.

Remain fixed and level at any point of deployment

High capacity – any load and platform shape can be accommodated

Can be installed in an existing pit