Two waterborne buildings were pre-built and towed by tug to Water Square, where they will float rather than using concrete marine piles 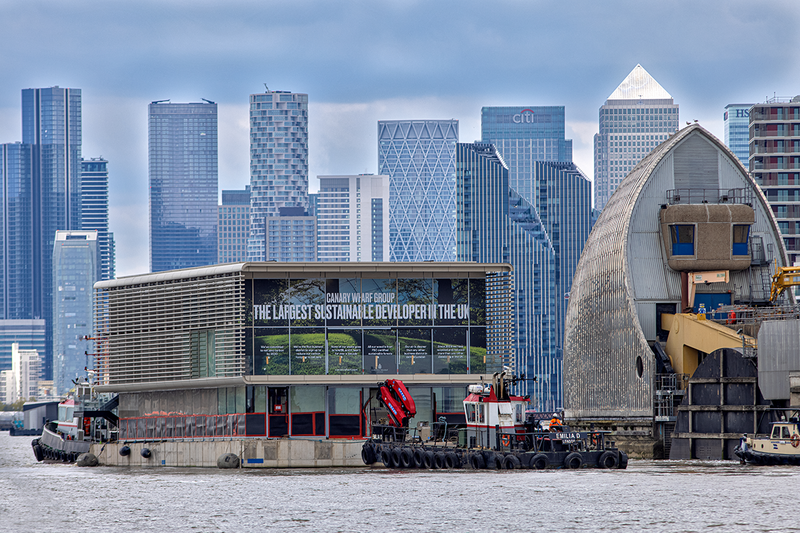 The pavilions were pulled by tug from the construction site in Beckton, via the Thames Barrier and Greenwich to Canary Wharf

Londoners enjoying a post-lockdown walk along the Thames in Greenwich earlier this month might have found themselves rubbing their eyes and choking on their lattes as they saw two 2,000-tonne buildings sail past, pulled along by tugboat.

The floating concrete and steel pavilions, thought to be the first of their type in the world, were designed by Glenn Howells Architects for Canary Wharf Group in response to the uniquely aquatic constraints of its site at Water Square, formerly known as West India Dock.

They sit in a closed body of water directly above the tunnels of the Jubilee Line, a sensitive location that prevented the construction of marine concrete piles – driven into the river bed and projecting out of the water to anchor waterborne buildings.

Instead, an unanchored fully-floating solution was devised, in collaboration with engineer Ramboll Marine. ‘To my knowledge, there aren’t any other purpose-built unanchored floating buildings,’ David Henderson, director at Glenn Howells Architects, told RIBAJ. ‘The closest equivalent are boats repurposed as buildings.’

Each pavilion is kept buoyant by a shoebox-shaped 40m by 15m concrete hull, held in position in the dock by an arrangement of bridges and pontoons that double up as circulation and access from the quayside. The complicated load path means bracing is configured to distribute loads through the bridges into points on the quayside.

The dynamics of the environment, which is subject to tidal change, storm water retention and potential swell from river traffic, proved the biggest design challenge.

‘From a neutral position, the range of vertical movement is +/-700mm. It’s like dealing with an earthquake zone on land,’ said Henderson. ‘If a wave runs underneath the hull, the building rides up and over, creating flex and movement. The structural steel frame on top of the concrete has to allow for that flex and so does the cladding attached to the frame, it becomes a cumulative thing.’

The structure is also designed to accommodate deflections caused by live loads, such as the sudden movement of people from one side of a pavilion to the other during a fireworks display.

Potential ship impacts were another concern. Barges are regularly pulled around the docks by tug, and if one were to come loose and crash into the structure, the steel pontoon would act as a crumple zone to absorb a certain amount of the force, before it is distributed into the hull.

Building services, including electricity, gas and waste water, run through the bridges, which are designed to twist to accommodate movement; cover plates on the surface slide in several directions to prevent gaps from opening up in the walkway. This complicated arrangement required 12 sheets of architectural drawings for each bridge, even before the detailed structure and MEP drawings.

The construction site in Beckton, near City Airport, was another source of fascination for London residents.

Here, the hulls were cast alongside a dock and loaded by specialist remote controlled trailers onto submersible barges. The barges were then anchored to a quay, which served as the building site and materials storage for the prefabricated upper floors, comprising the steel frame, floor to ceiling glazing and linear extruded aluminium shading elements.

Periodically, the submersibles were towed out onto the water, spun around 180 degrees and then realigned with the quay to provide builders with access to the opposite side. Once the pavilion shells were complete, tugs floated them down river, through the Thames Barrier and past Greenwich to their final home at Water Square in Canary Wharf where the fit out is under way.

Climate changes mean that some 800 million people and 570 cities could be at risk by 2050 if sea levels rise half a metre, according to the C40 Cities Climate Leadership Group. Does this mean we are likely to see more of this type of floating building as a response? Perhaps not in significant numbers, says Henderson, as the solution was developed specifically for the constraints of the location. However, the typology could open up new options related to re-activating the waterfront and sustainable reuse and reappropriation.

‘From an environmental perspective, it's not the most responsible approach to tear down and start again,’ he said. ‘Adaptive reuse is a valid response to existing buildings on dry land, so this could add an extra dimension in the water. You've got an asset you can potentially move somewhere else and sell on to someone else, that’s arguably a more elegant solution.’