Technological advances and economies of scale are changing the face of healthcare, with bigger facilities integrating surgeries, hospitals, and wellbeing and social care on single campuses 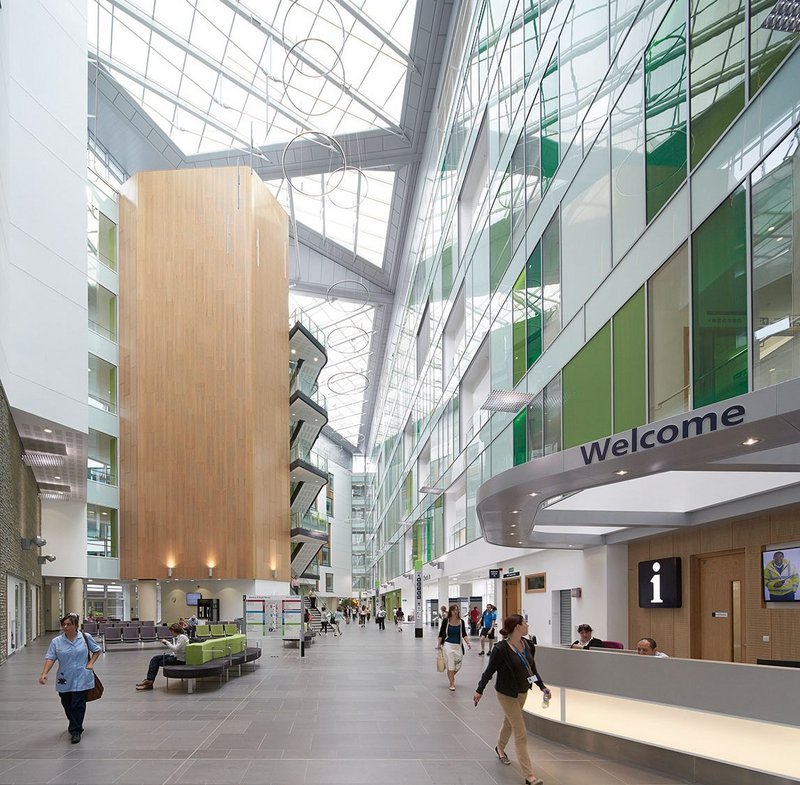 The interior scale might be big at BDP’s Southmead Hospital in Bristol but from the outside it steps down to integrate better into the surrounding urban landscape. Credit: BDP/ Hufton + Crow

From July 1, the new Health and Care Act put England’s 42 integrated care systems (ICSs) on a statutory footing, formalising a fresh approach to NHS services. Gone are the old boundaries between hospitals and primary care, health and social care; this new network of collaborative partnerships has been created to tackle broad-ranging local health and care needs, delivering services in a more joined-up way.

But as it looks to drive new models of care and improved efficiency, and deal with extreme day-to-day pressures, the NHS is having to maintain, modernise and replace an estate of more than 1,200 hospitals and some 3,000 other treatment facilities. The New Hospital Programme (NHP) is the government’s flagship policy for hospital building, although its slow progress in bringing forward projects – and consequences for costs – is among concerns being investigated by the National Audit Office (NAO). Still, plans for new hospitals and other facilities give a glimpse of how our future NHS could look.

At the economies of scale and cost efficiency that we have in the NHS, it’s important to have a bigger single building

After the demise of PFI, many healthcare providers had to scale down development aspirations. ‘We’ve done a lot more masterplans, looking at how a hospital estate can improve incrementally over a 15-20 year period by a strategic approach. So rather than planning a single £400m project, we’ve been planning for a series of £50-70m projects,’ says Andrew Smith, healthcare lead at BDP. That reversed to a degree with the advent of the NHP, but in an environment where capital funding fluctuates and models of healthcare are evolving, ‘you’re constantly trying to work out what is the context, what are the key drivers and how to respond in the most appropriate way,’ says Smith.

Upcoming projects like Catterick Integrated Care Campus, in North Yorkshire – where BDP is working in a team led by Tilbury Douglas – demonstrate how primary care facilities are increasing in scale as they extend their remit. This collaborative project by the NHS and the Ministry of Defence will serve surrounding communities and military personnel, providing GP services, military medical services, community services, mental healthcare and voluntary, community and social enterprise sector services in one building. ‘At the economies of scale and cost efficiency that we have in the NHS, it’s important to have a bigger single building, to deliver the highest possible level of operational efficiency.’

But there can be challenges in integrating these bigger buildings into their context. Hospitals can appear ‘other-worldly’, acknowledges Smith, continuing, ‘If you look at some of the advanced cancer facilities, they can be quite different to other building types. Part of the interest is how you balance that with the expectations of a building within the local area.’ At Southmead Hospital in Bristol, BDP’s design steps down where it meets neighbouring housing and has integrated landscaping, including a roof terrace for staff. ‘All our healthcare campuses start with a landscape concept,’ says Smith. ‘From a masterplanning point of view you have to work at the level of both the urban design and the ensuite simultaneously. 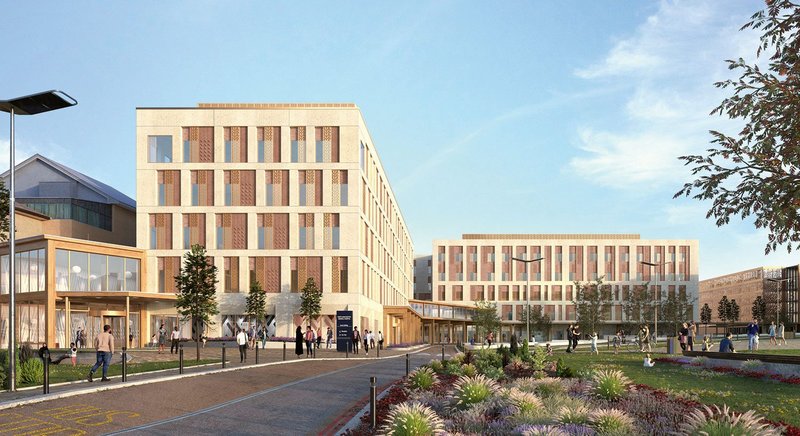 Urban design on a large scale has been required to plot the redevelopment of Manchester University Hospital NHS Foundation Trust’s (MFT) North Manchester General Hospital (NMGH). The hospital’s 27ha site, occupied by around 90 buildings, is set to become home to a health-focused neighbourhood, including a new acute hospital, mental health hospital, wellbeing hub, education hub to train healthcare staff and the community, and homes, potentially including step-down housing for recovering hospital patients. At the heart of the site will be a village green with café, sports pitches and other amenities.

The proposal has been shaped by the 2016 devolution agreement between the government, Greater Manchester health bodies and local authorities, and NHS England, which gave the area direct control of its health and social care budgets, and is set out in a Strategic Regeneration Framework. ‘Part of the proposition was that you needed to fix community care, and not only provide a replacement hospital,’ explains Alex Solk, partner at Sheppard Robson. ‘The proposition between the trust and Manchester City Council doesn’t mention a hospital – it talks about health outcomes and wellbeing and what needs to be done to improve them.’ Beyond the hospital’s site boundary is the economically deprived suburb of Crumpsall. ‘This is about extending Crumpsall into the campus and vice versa, so there is no dividing line between the two,’ Solk adds. The Strategic Regeneration Framework says redevelopment could boost local people’s life expectancy by 1.3 years.

Construction of the site’s mental health facility has started, along with enabling works for NMGH, and a commercial partner – developer Bruntwood – is on board to help deliver later non-healthcare elements of the masterplan. All the project needs now is confirmation of NHP funding. While MFT and others wait for that green light, trusts and ICSs elsewhere are pushing ahead with integration plans – particularly to address current pressures. ‘We’re seeing acute trusts taking an interest in owning and operating GP superhubs – rather than primary care trusts – because of the number of people being referred to hospitals. Links into step-down housing to relieve pressure on hospital beds are also featuring,’ says Solk. Community diagnostic centres and treatment centres are among other solutions.

But funding options for development remain limited and the need to upgrade the NHS estate is acute, with health think-tank The King’s Fund putting the cost of remedying its maintenance backlog at more than £9 billion and growing. ‘The elephant in the room around the NHP is if that if those projects are all built, they’ll probably represent around 10% of the total NHS estate, so 90% of the estate by area is falling further and further into disrepair,’ says Colin Hockley, partner at Sheppard Robson.

This raises the question of whether investment should be focused on both refurbishing more of the existing NHS estate and rebuilding. The answer is complicated, as Hockley explains, ‘Do you demolish or refurbish sustainably and provide value for money over the short term, and live with the constraints of refurbishment, which perhaps compromise new ways of working, models of care and clinical efficiency? Sometimes strategically, buildings might not be well placed on a site, so there can be a cost consequence on the way you can develop the rest of the site.’ The NHS estate is also extremely diverse, with NMGH including Victorian workhouse buildings and Nucleus blocks, the latter being retained under its redevelopment.

The business case process for the NHP requires trusts to explore options ranging from retention to redevelopment. It also factors in rising build costs, indexed to actual out-turn costs, an area being scrutinised by the NAO. ‘We’re going through unprecedented inflationary pressures and there are concerns about rising costs,’ says Hockley. ‘With the NHP, delay in the projects just adds to their costs’. 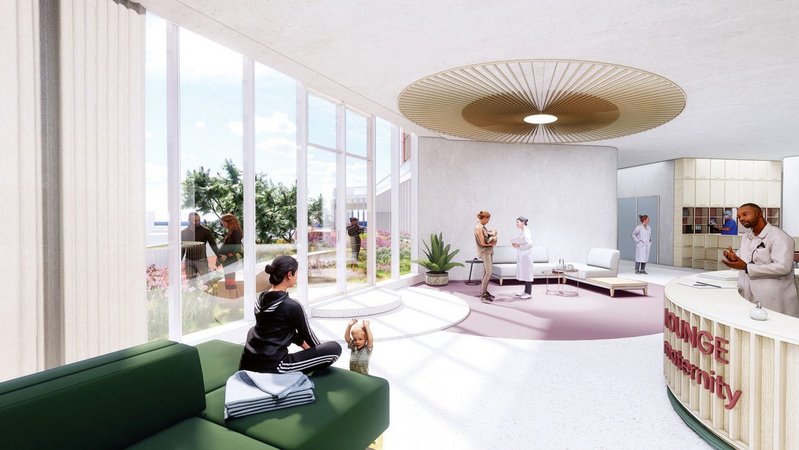 Rethinking hospitals
Within the NHS, models of care also continue to evolve. ‘There’s a whole other narrative if we’re thinking of the system as a whole,’ says Mark Rowe, managing principal at Perkins&Will. ‘Technology and ways of accessing healthcare are ultimately moving many services out of hospitals, which is leading to debate about what hospitals become.’

The Leeds Teaching Hospitals NHS Trust’s Hospital of the Future project is giving one answer to that question. The trust is working with Perkins&Will, sister practice Penoyre & Prasad and Schmidt Hammer Lassen on a project to deliver new premises for Leeds Children’s Hospital, a facility for adults, spanning outpatients, imaging, day surgery, therapies and endoscopy, and the UK’s largest single-site maternity centre. Redevelopment – again awaiting confirmation of NHP funding – also releases land for the creation of a hub for research, innovation and technology in life sciences on the Leeds General Infirmary site.

Adults’ and children’s hospitals will occupy one building but each has its own entrance door, receptions and banks of lifts, ‘so, as a visitor or patient, you’ll go to the single hospital,’ says Rowe. Hospitals occupy alternate floors, although there are back-of-house synergies in services, such as operating theatres. ‘A lot of work has gone into making that work and avoiding crossflow,’ he adds.

Integrating hospitals on a constrained site means building high, which is demanding. Rowe explains, ‘The smallest tweak in the design can be like turning around an oil tanker when you have 20 floorplans. We’ve got a huge central core, which is the highway through which all services run, so this is like putting a clock together.’
Rowe and others are optimistic the current NHP project pipeline will be realised, but the political and economic landscape has shifted since Boris Johnson first promised 40 new hospitals by 2030. Now Liz Truss will decide where the NHS, and its estate, goes from here. 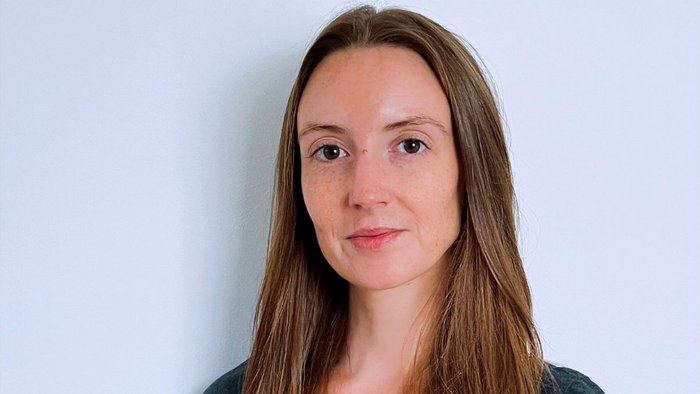