From the outside the Kameha Grand looks relatively restrained. It’s a very different story inside, and the design exuberance spills on to the floors 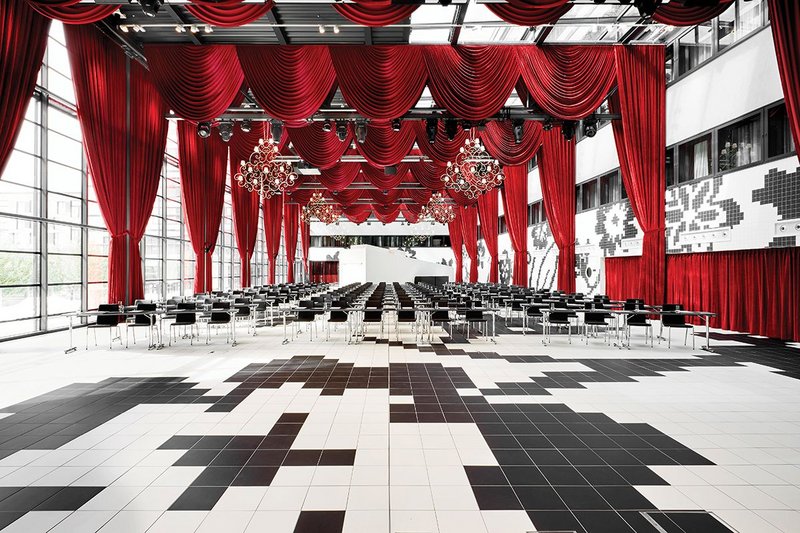 With walls resembling giant slabs of chocolate, huge cow-bell lamps and bank vault style mini-bars, Marcel Wanders’ interior design for the Kameha Grand Zurich makes full use of references to the new hotel’s Swiss location. The result is an extravaganza of colour and pattern that may well have minimalists reaching for the grappa.

Every element is used to the max, including the hard and soft flooring, which encompasses everything from lavishly patterned
bespoke carpets to a bedroom floor designed like a running track.

Built in the new Glattpark business district between the airport and the city, the 23,700m2, five-storey hotel was designed by American practice tecArchitecture and is intended for business users as well as tourists. This perhaps accounts for a double-skinned exterior that is comparatively sober, despite being enlivened by patterned mullions intended to evoke a dress flowing across the facade. But the real fun is inside, where Wanders’ typically ebullient approach is given full rein. Carsten Rath, founder and CEO of the Kameha Grand chain, wanted a statement design that ‘emotionally touched’ the guests and ‘spoiled their eyes’. He naturally turned to the Dutch designer, with whom he’d worked previously, to fulfil this brief.

‘Marcel always has the big picture in mind but is also very much into details, which I respect him for,’ says Rath.

Wanders’ aim was to create a ‘must-see destination in Zurich’ by using aspects of Swiss culture in unexpected ways.

‘A hotel should entertain, inspire and stimulate,’ he says. ‘We want the guest to have a lifestyle experience, by creating a place full of surprises and beauty.’

With such an abundance of attention grabbing, Swiss-themed features, you might expect the flooring to take a back seat. Instead it is an integral part of a design that is deliberately diverse in mood, from the exotic Middle Eastern vibe of the Shisha lounge through to the playfully themed suites and the dramatic Kameha Dome events space. Lobby areas feature rugs with intricate Guilloche rosettes and metamorphosis patterns as well as others designed to look like giant golden coins. All give the golden cow-bells and quilted walls a run for their money.

But perhaps the most significant flooring component of the hotel is 8,000m2 of bespoke Axminster carpet, made in the UK by Brintons following a year-long collaboration with the Dutch designer.

This was installed throughout the standard bedrooms, conference rooms and corridors, along with 6,000m2 of underlay, and also features in the bedroom suites.

‘The role of the carpets in Marcel Wanders interiors is to tie all the design elements of the interior together,’ says Wanders. ‘Remarkably, in the Kameha Grand Zurich, the carpets fluently incorporate the many elements of Swiss themes, the hotel logo, Brintons’ know-how and Marcel Wanders’ signature patterns into a gracefully cohesive whole.’

Brintons’ head designer Andrew Howell says the project was a fantastic opportunity for the company.

‘The collaboration process with Marcel Wanders took a year in total from creation to completion and we worked closely with Marcel’s team to interpret his hand-drawn designs into electronic carpet patterns, which were then used to create the final carpets,’ he explains.

‘On this project we used state of the art jacquard looms, which sent the carpet designs electronically across to the loom from which we then weaved the physical carpet.’

The Axminster carpets are an 80% wool, 20% nylon blend and incorporate a weave of up to 32 individual colours to create the pattern. They are designed to last for 40-50 years.

‘The wide range of carpets join together to create a cohesive walkway that guests can enjoy throughout the whole hotel, from boardroom to bedroom…The rich, floral inspired designs depicted in maroons and creams create a traditional Swiss aesthetic for the bedrooms, contrasted effectively against the monochrome, geometric inspired designs of the boardrooms,’ says Howell.

In the business rooms, even the dullest meetings will surely be enlivened by the triangulated large-scale carpet pattern, inspired by a silver wrapper around a chocolate bar and executed in sober colours to counterpoint the golden and dark chocolate wallpapers.

Along the main corridors, the hotel’s floral logo, a Wanders-designed motif of flowers and tulips interlaced through branches, is interpreted in a geometric pattern of various greys to establish a calm ambience as guests enter and leave the room.

In the corridors leading to the meeting rooms, the flowers alternate between background and foreground over stripes of various widths. Within the 224 premium and standard bedrooms, a variety of intricate flora motifs are again combined with contrasting, striped borders. 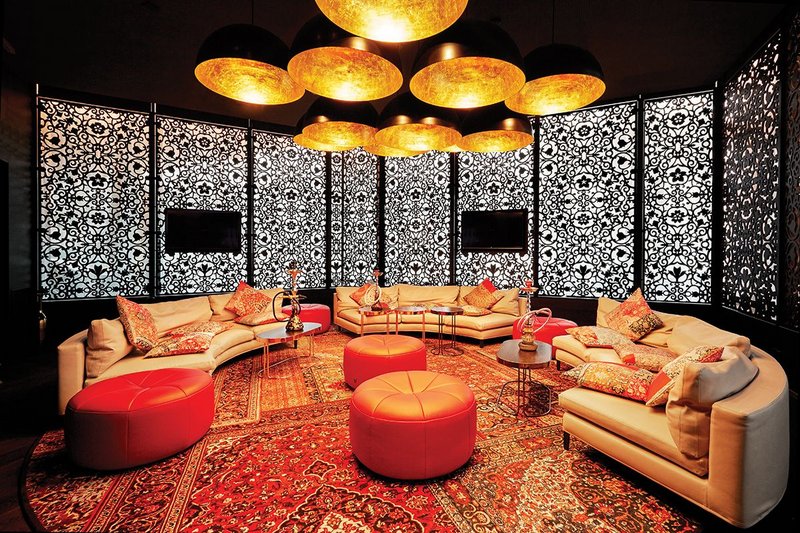 Shisha lounge where the carpet is printed with the effect of overlaid Persian rugs. Credit: Franceso Secchi

But it’s in the 11 themed suites that Wanders really ramps up the design volume, providing a visual overload of themed furnishings. In the Burlesque suite, deep red blooms on the carpet coordinate with red drapes, combined with dark chocolate wallpaper and sumptuous quilted walls and furniture. A lighter rose pattern is used in the Diva Suite, while in the Middle Eastern Suite, the carpet incorporates Arabic shapes and colours.

The Gentleman’s Suite has a monochromatic theme with a similar carpet pattern to that used in the business rooms. A darker design with more saturated colours is used in the Poker Suite to evoke the feeling of being in a casino. In the Watches Suite, the carpet has a restrained black and grey heart pattern to offset the multitude of busy clockworks in the room. However the Workout Suite breaks with the use of carpet, featuring a section of running track-patterned hard flooring instead.

With its frequent references to Swiss motifs, the hotel’s interior establishes a distinctive identity at odds with the more anodyne approach of many international hotels

In the suite bathrooms, sober grey floor and wall tiling is used to offset exuberant chandeliers, as well as floor-to-ceiling 3D images printed on to glass, that refer to aspects of Zurich’s heritage such as banking and clock-making.

After the luxurious texture of the rugs and carpets, and the warm wooden floors of the restaurants, the monochromatic tiled floor of the Kameha Dome, the hotel’s 701m2 ground floor events space, is a complete contrast in tone. Here black and white tiles are combined with opulent red draped curtains and chandeliers to give a contemporary twist on grandeur. The tiles are arranged in a large-scale, pixellated pattern of the hotel logo.

With its frequent references to Swiss motifs, the hotel’s interior establishes a distinctive identity at odds with the more anodyne approach of many international hotels. This bold use of pattern, especially on the carpets, chimes with current flooring trends in hospitality settings, according to Brinton’s
Andrew Howell.

‘The carpets that we created in collaboration with Marcel Wanders for this project reflect a more adventurous and complex style of flooring within hospitality interiors,’ he says. ‘We have been working closely with designers to create more intricate carpets that allow flooring designs to become the main focus of the interiors.’ 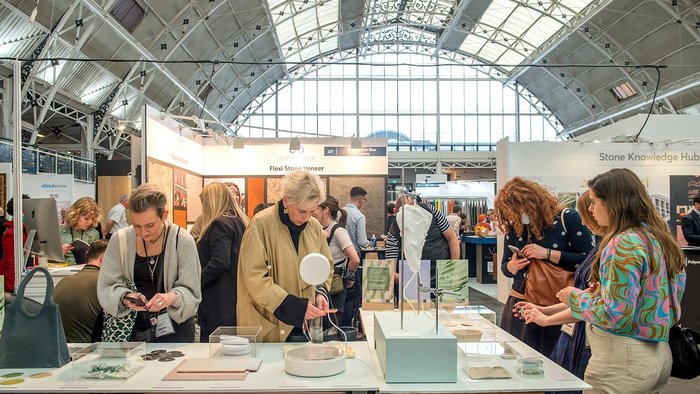 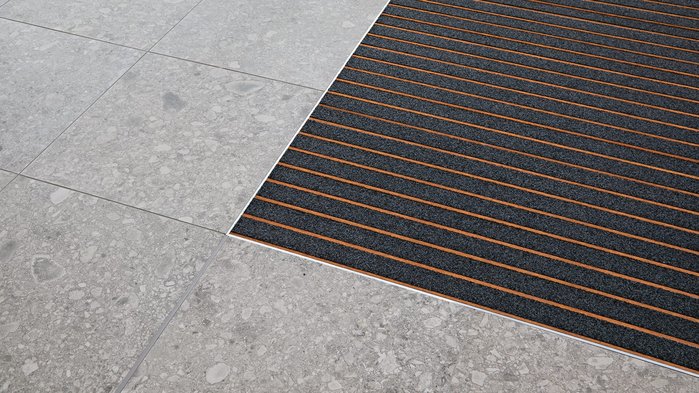 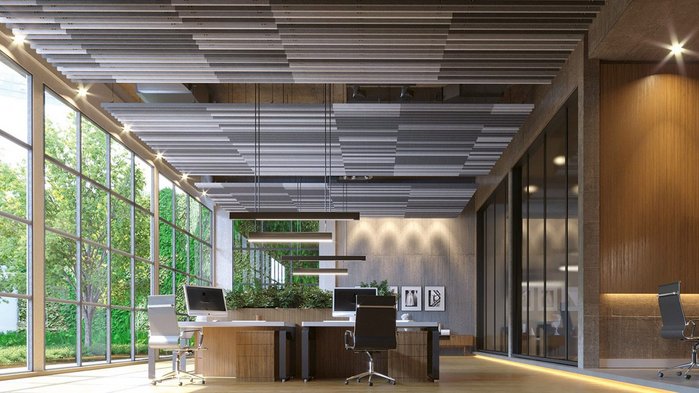