Commissions for life sciences buildings could rise as the UK aims to develop the sector, but don’t underestimate these specialist buildings, warn experts 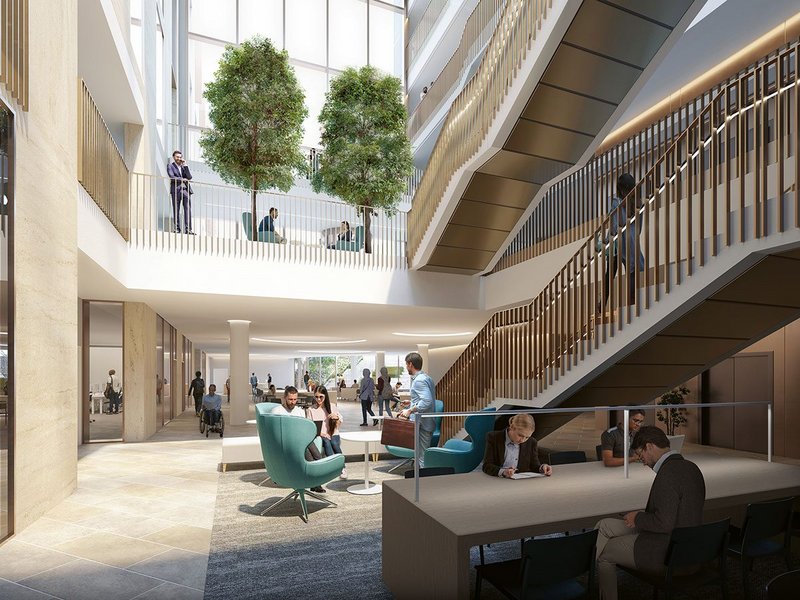 Pulling together a number of Oxford university’s clinical departments, NBBJ’s new Life and Mind Building (LaMB) will be a major addition to its estate. Credit: NBBJ

We’re getting asked: ‘can you do science in this building?’ – but that’s like asking if you can you do sport in a building

The UK as a science superpower: that’s the ambition prime minister Boris Johnson set out in a growth plan for the life sciences sector, published this summer. Even allowing for Johnsonian hyperbole, this is a sector that has for some years been on the up, having been backed by the government in its 2017 industrial strategy. And globally the sector is attracting huge interest from investors, aware of its prominence and resilience through the pandemic.

That has pushed a niche sector associated with universities, research institutes and pharmaceutical majors into the property mainstream, with property agents even warning of a shortage of laboratory space. As a result, a property industry that has seen portfolios and projects plunged into uncertainty by the pandemic is now looking to life sciences as a lifesaver for development, and in repurposing everything from shopping centres to office blocks.

Historically, public and private sector clients have taken quite different approaches to life sciences, with the former bringing the same rigour they apply to science itself. ‘In higher education there can be very particular demands in what clients are seeking to achieve and a lot of conflicting demands, particularly around how a facility will operate,’ explains James Eades, partner with Nicholas Hare Architects. ‘Client teams are generally multi-headed, building users are similarly diverse – and a lot of the work is in urban centres and on challenging sites and in and around existing buildings.’

By contrast, private developers conventionally work in science park settings, where their speculative buildings must appeal to a range of occupiers, says Eades, whose practice has worked with both client groups, including developer MEPC at its Milton Park science park in Oxfordshire. He wonders how new entrants will make their way in this environment, feeling ‘it will be interesting to see to what extent the commercial developer/investor market can recognise the importance of what science space looks like’. He explains: ‘Developers need to understand the capital cost outlay for a life sciences occupier. It is about a building being appropriately designed for its target market and, until tenants come along, there is a risk they may build the wrong space or over-specify’.

A ‘feeding frenzy’ is how Matthew Jones, partner with Hoare Lea, describes current market interest, which has seen his company carry out recent feasibility studies for numerous potential conversions. ‘Science is broad in scope, but sciences can be completely different,’ he says. ‘We’re getting asked: ‘can you do science in this building?’ – but that’s like asking if you can you do sport in a building.’

From an engineering perspective, Jones says it is possible to convert buildings for science uses that appear far from ideal, as long as they are in the right location.

‘To create value, there need to be a lot of scientists in proximity to knowledge, so that can often trump the functional requirement,’ he explains. ‘The conventional wisdom is that science buildings in higher education will have slab-to-slab heights of 4.2m or 4.6m, but we have put people in a building with ceiling heights of as little as 2.3m, because that building is close to the Crick Institute in London.’ Developers’ biggest challenge, he believes, comes in deciding what science capability to put into a building: ‘Most developers are looking for a model that’s affordable and, as you ask a building to do more things, the cost increases’.

The key is to create not a fully adaptable building on day one, but a robust shell and core that can be adapted 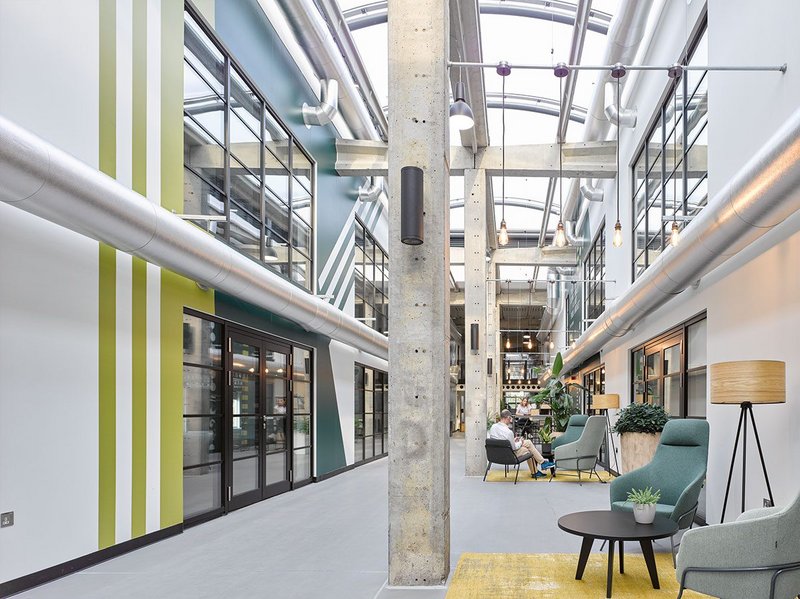 Making buildings work for sciences
‘Commercial science is a relatively new market for urban developers and they are struggling to understand the building and its servicing – and therefore the cost, level of fit-out and rent that’s achievable,’ is how David Lewis, partner with NBBJ sums up the evolving picture. A change in the way big business approaches R&D is also having an impact, says Lewis: ‘Big companies are now cutting in-house R&D budgets and instead investing in life science start-ups. That has implications for the type of space provided, because start-ups have limited funds so fit-outs might need to be different and start-ups will have limited equipment, so there could be potential to provide areas for equipment that could be shared.’

In the commercial science sector, Darius Umrigar, science and higher education director at NBBJ, says, ‘There are probably only half a dozen knowledgeable developers of scale that have done science space regularly.’ Like others, the practice is receiving requests from developers to assess existing buildings and projects in design for repurposing, a proposition that not only relies on the science use envisaged, but also on a building’s practical potential in areas including services, slab-to-slab height, vibration control, acoustics, daylighting and operational logistics. In its responses, the practice draws on experience in complex science facilities, including Guy’s and St Thomas’ NHS Foundation Trust’s adaptable estates strategy. The strategy was a shell-and-core design approach that was sufficiently flexible to enable either healthcare, life sciences or office use of a building, taking on board servicing requirements and its appeal for different users. The building developed under that strategy will be used for healthcare, but could change in future. ‘The key to this and a project we’re working on is to create not a fully adaptable building on day one, but a robust shell and core that can be adapted,’ says Lewis. ‘It’s about anticipating what tenants may need,’ echoes Umrigar, ‘but not actually delivering a complex facility, to keep options open both for flexibility of tenants and so tenants can grow.’

NBBJ’s Life and Mind Building at the University of Oxford has been designed for multiple laboratory types so it can be reconfigured to meet future demands of scientific learning and research. This is the university’s largest new build to date, bringing together its Department of Experimental Psychology and new Department of Biology, which combines zoology and plant sciences. Alongside these, the building will house the new Ineos Oxford Institute which works on antimicrobial resistance. Biology requires wet labs, while experimental psychology needs dry labs and to accommodate visitors attending for research and therapies. The building’s layout was also influenced by VAT rules governing construction.

‘Teaching space attracts VAT but research does not,’ explains Umrigar. ‘So, with a fixed budget, that became fundamental to how we mixed activities. There is a wing of space that is primarily wet-lab driven but it has been designed to be easily adapted for more office based activity if needed, to safeguard the university’s long-term interests.’
NBBJ has already successfully repurposed existing buildings for science uses – notably The Works on the Unity Campus just outside Cambridge, which was completed early last year for client Howard Group. An industrial shed that once housed a car body repair business was stripped back to its precast concrete frame, reclad and had an upper storey inserted, to create 63,000ft² of flexible office/lab space – including a central, atrium-topped social street – for multiple tenants. ‘The scheme hits the nail on the head commercially,’ says Lewis.

The architects were involved in the delivery process, taking part in two daily client meetings and twice weekly presentations

Learning from a megalab
The UK’s largest repurposing project for life sciences is the new Rosalind Franklin Laboratory, in Leamington Spa, justifiably known as the megalab. Developed as part of the government’s pandemic response, the facility allows around 2,000 staff to process vast quantities of Covid tests rapidly. It was created in a relatively new warehouse for the purely practical reason that it needed to be in service fast. ‘We were working at an ultra-fast pace, which I’ve never encountered in laboratories,’ says Gary Clark, science and technology lead at HOK’s London studio. ‘On a normal project the works below ground are the main risk, and after that comes the external envelope. This approach cut out long lead items, so we were effectively building a box within a box. Site storage was in the middle of the building and construction continued around the edge, 24 hours a day.’

The warehouse had the required space – 10m from floor to roof, and a 200m long by 100m wide floorplate – but inevitably came with constraints. ‘The foundations could only take a certain weight, for spans and punch loads, and we had to work round the existing column layout,’ says Clark. Laboratories are on the ground floor, with plant on a newly inserted first floor. To ensure laboratories could be installed efficiently and achieve their containment level 2/3 certification, the project team – led by Mace with WSP as engineering lead – collaborated with laboratory system manufacturers Middas and Asgard Cleanroom Solutions to develop a kit of parts.

On the outside, the building has changed little. ‘For speed, cost and embodied carbon we didn’t want to change much, although we have suggested a few measures for the future,’ says Clark. Exceptions include rooflights added to create a pleasant environment for staff who may be working long hours and a glulam modular entrance canopy.

The project team started work on the laboratory in October and a RIBA stage 3 design was delivered 10 weeks later in mid-December. The contractor started work the same month, the first laboratory lines were handed over in May and the full facility went live in July. ‘We had to overlap the RIBA stages and do briefing, design, construction and supply chain engagement at the same time. Everyone was focused on a common objective,’ Clark says of the experience.

Delivery has broader learning for construction, being an example of the more coll­­­aborative, streamlined and outcome ­focused approach advocated by the government’s Construction Playbook, with design undertaken in Revit and transferred directly to manufacturers. The architects were involved in the delivery process, taking part in two daily meetings with the client and twice weekly client presentations, while a client-backed project charter promoted collaborative behaviours. But the kind of collaboration that delivered the megalab can only become more widespread if professions can escape the confines of insurance liability, says Clark: ‘Project insurance is desperately needed to cross the boundaries of liability. It is something the government needs to think about.’

While this project was exceptional, it adds to the buzz of excitement in property circles around life sciences. Hoare Lea’s Jones, however, is cautious. ‘The market desperately wants science to be the answer, but it won’t happen at the scale developers want. Most property agency advice is based on the rear view mirror. This is an emerging market with no rear view mirror and that makes it difficult to give answers,’ he says. ‘There is currently a search for a formula for science. We did some work looking at that a while back, but came to the conclusion there is no single answer’. This may not be what the property industry wants to hear right now, but it could be a useful reality check.