Built on a valued patch of grass at St James’s University Hospital, Harehills, Heatherwick Studio’s Maggie’s is designed as a series of outsize garden ‘planters’ with views through structural glazing 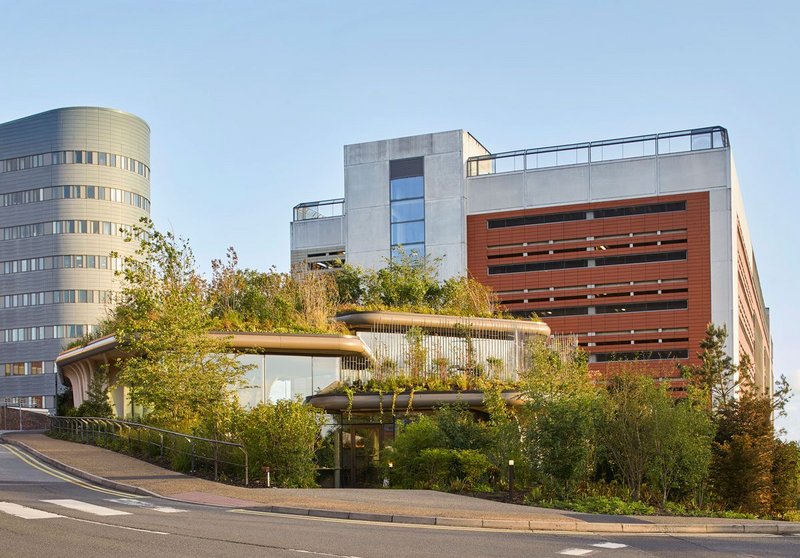 A valued patch of green space on the St James University Hospital site has been reborn as a ‘wilded’ Maggie’s. Credit: Hufton + Crow

The last patch of greenery on a tight urban site in Leeds, hemmed in by two roads and several large buildings, including a multi-storey car park, is far from the ideal site for a cancer support centre devoted to calm and healing.

Undaunted by the drab location and inspired by the brief to create ‘a home that people wouldn’t dare build for themselves’, Heatherwick Studio doubled down to create a nature-inspired building with a sweeping exposed timber structure immersed in lush British woodland greenery covering roofs and terraces.
The 462m2 Maggie's Centre, located within the campus of St James’s University Hospital – also known locally as Jimmy’s – is the charity’s 26th centre in the UK and the first healthcare project completed by the practice.

It will provide an anticipated 110 visitors a day, including people with cancer, their friends and families, with free practical and emotional support as they come to terms with the disease.

Rather than dig into the steeply-sloping site, the building follows the natural contours, with three pavilion-type structures resembling garden planters stepping down in levels. These surround an open plan area comprising a kitchen, library and exercise room connected by stairs.

The gardens overlap as they descend and overhang to shelter communal areas; at the highest point visitors have views of the Yorkshire Dales to create a positive link with the world outside. The planting is based on the British woodland, with hardy native species that support the area’s existing biodiversity.

Nick Ling, technical design lead for the project at Heatherwick Studio, tells RIBAJ: ‘The hospital really valued the small patch of grass that the site takes over so, for the good of the entire hospital and the patients and staff who look out onto it, we wanted to reinstate greenery, lift the gardens up and improve on what they had before.

A focus on ‘healthy’ materials conducive to patient wellbeing and sustainable performance enabled the Centre to exceed Part L requirements by around 12%, even though environmental targets were not included in the brief.

Energy consumption is based on the needs of a domestic home, using underfloor heating and passive energy conservation techniques such as thermal mass and insulation in the built-up roof.

Cross-laminated timber (CLT) buildings have become commonplace in the UK, but what sets Maggie’s Leeds apart is the sheer variety of engineered timber construction on display.

The superstructure is a sustainably-sourced spruce system manufactured in Switzerland and fixed together on site in just eight weeks. The walls of the planters provide stability and comprise 100% stressed skin timber with timber studs and a plywood exterior. A simple lime plaster finish allows the walls to breathe and encourages natural ventilation.

A series of glulam fins sprout from the planters to provide support for the CLT roof decks. Each fin has a completely different profile, shape and sized to handle varying loads, some are 100mm or 150mm wide, larger transfer fins are sized 200mm to deal with more significant weight from columns above.

‘It is a very finely-tuned engineering solution that we worked up closely with our engineers and the timber fabricator to achieve,’ ­explains Ling.

Circular columns in the facade were initially designed in steel, but the timber specialist developed a laminated veneer lumber (LVL) alternative with services running through a gap in the centre. The solution achieved the same diameter as steel, at a reduced cost, while the ‘curved cuts around the veneers produced a lovely texture’, says Ling.

With a strong emphasis on the innovative wood structure and planting, the glazed facade was conceived as a recessive element of the project, intended to accentuate both.

The structural glass is supported on the concrete raft foundation and held at the top in a recessed deflection head channel within the CLT deck. This allows the timber structure to flex under live loads without affecting the glass. The largest of the panels are 3.1m high by 2.8m wide.

The system doesn’t tie into the LVL columns in the facade, which only support the timber beams and roof deck. The same structural glazing system was used to create a clerestory over the central kitchen space, says Ling: ‘The ­multi-storey car park puts the Centre in shade a lot of the time, so we felt it was very important to make sure any sunlight hitting the site could get into the space, warm it up and give people moments where they feel at home.’ More traditional aluminium tilt and turn windows are installed in the walls of the three planters.

Heatherwick Studio wanted Maggie’s Leeds to provide respite from a clinical hospital environment and therefore focused on a homely feel with natural and tactile materials and soft lighting.

Window sills and shelves can be filled with visitors’ objects and possessions, some are positioned across the tallest glazing panels to conceal transoms, which had the additional benefit of eradicating the need for manifestation safety stickers.

‘Things you touch in the building had to feel warm – we spent a lot of time sculpting the profile of the timber handrails for the stairs so they feel nice to run your hand along,’ says Ling. ‘We didn’t want the accessible toilet to look institutional so all the grab rails are timber-lined.’

A plan to use timber pull handles on the other internal doors was abandoned due to ‘technical issues’ with lamination and perceived maintenance problems, so instead steel lined handles from Allgood were specified.

The front entrance to the Centre has psychological significance as a threshold beyond which an individual might begin to accept a cancer diagnosis. To make the door less intimidating to newcomers, it is positioned to the side under a lower roof, a nearby bench gives visitors an opportunity to pause and reflect before entering.

The planar glass of the entrance door is juxta­posed against a rough bronze handle cast to match a branch taken from one of the plants on the roof. It’s another soulful and welcoming touch to bring comfort to visitors who may face a difficult and stressful journey ahead.