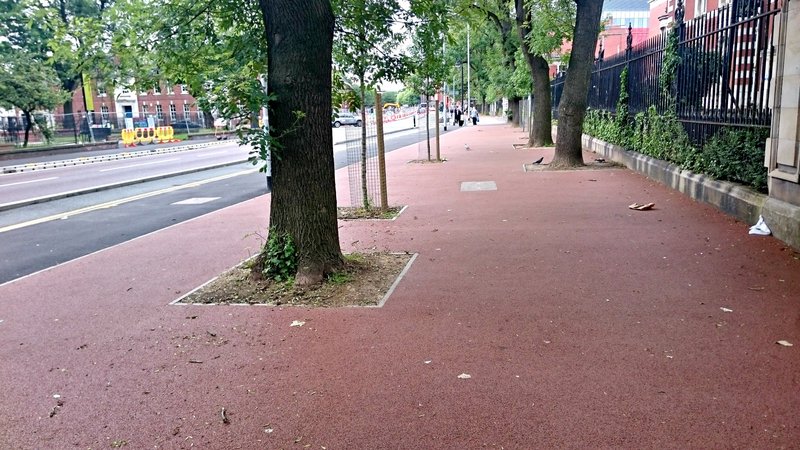 Manchester’s Oxford Road is undergoing a large-scale redevelopment throughout 2016. The proposals include over 4km of major bus priority lanes and Greater Manchester’s first ever Dutch-style cycle lanes which will see people on two wheels segregated from the traffic.

The scheme has been revamped following a major public consultation with nearly 900 residents. Sudstech has already provided approximately 1,500m2 of sustainable porous paving in pedestrian areas intended to ease congestion along the road from the 70,000-plus students that make the area their home every year.

Unlike other resin bound products the Sudstech system utilises a recycled car tyre sub base, eliminating delamination and clogging and ensuring unrivalled porosity of more than 50,000 litres per m2 per hour. The system has been developed over the past nine years and has been rigorously tested at the British Research Establishment for both impact and freeze thaw. All the finishes are made from natural stone. Varying grades of angular aggregate are used to maximise the strength and durability of the surfaces.

Due to the heavy foot traffic in the area, Manchester City Council specified that the material used needed to be extremely hard wearing, non-slip and completely SUDS compliant. The versatile nature of Sudstech paving persuaded the council to also specify it for hundreds of innovative new tree pits included in the scheme.