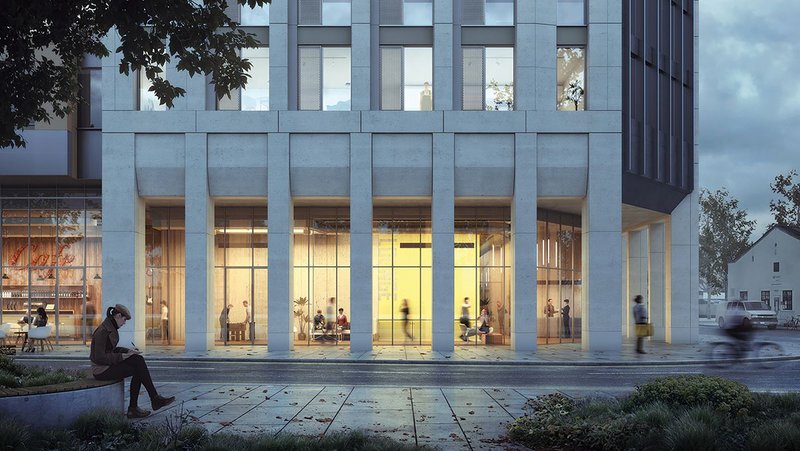 At 28 storeys, Apex House student accommodation is slated as the tallest modular building in Europe.

So here we are again. National media have this year returned to a story that is all too familiar: the failings of new homes and the woes of their unhappy occupants. This time attention has focused on the Orchard Village affordable housing scheme in Rainham, Essex, and the output of housebuilder Bovis Homes. The latter has reported a 3% drop in pre-tax profit in 2016 due to a ‘high level of customer service issues’.

These are the most high profile, but by no means the only, indications that the industry is struggling to deliver quality. An all party parliamentary group (APPG) reported last year that in a national annual survey of new homebuyers, 93% had reported problems with their dwellings. In a smaller YouGov survey this year, carried out for housing charity Shelter, half of respondents had found major problems with their new homes.

Government and industry backed reports have said for years that the solution is to move housebuilding into the factory, where quality can be more easily assured and the workforce that proves so hard to source onsite will be more readily available and highly skilled. It is a point that has been made most recently and forcefully in the bluntly titled report looking at construction labour and productivity – Modernise or die, written for the government by Mark Farmer, founding director and chief executive of Cast Consultancy. The weight of evidence and exhortation has not yet succeeded in diverting the volume housebuilding industry away from predominantly traditional build methods, but some now see a stronger wind of change. 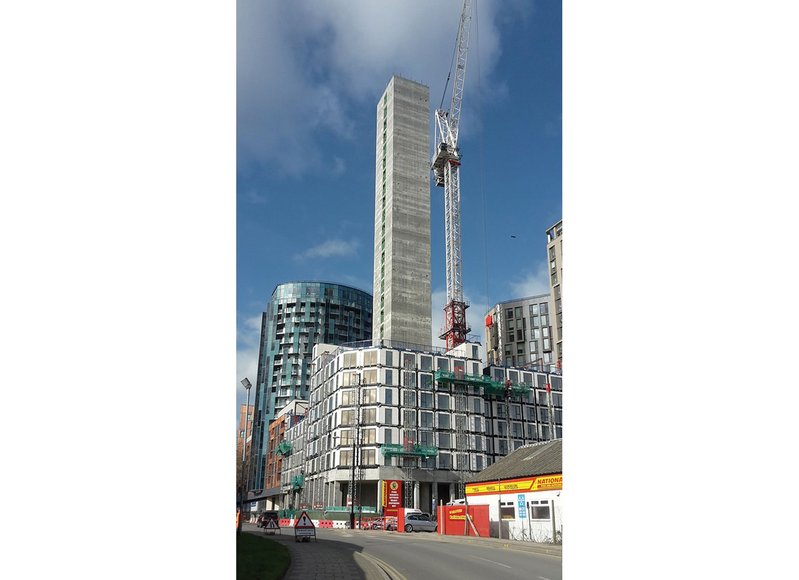 Modules being placed at a rate of 10 a day at Apex House in Wembley, London.

UK housebuilders might be falling short in delivering numbers and quality, but putting brick on brick remains a highly profitable business. The financial results of volume housebuilders generally make enviable reading; Persimmon reported a growth in pre-tax profit of more than 20% for 2016. ‘They’re very good businesses, and have good supply chains, so they’re hard to beat,’ says Rory Bergin, partner at HTA Design.

Numerous reasons have been given for present and past failings in workmanship, ranging from the traditional nature of housebuilding – summed up by Bergin as ‘assembling thousands of small parts out in bad weather with people who have never worked together before’ – to more recent changes in the industry. Andy von Bradsky, chair of housing network the Housing Forum and a member of the commission for the APPG for the built environment – which last year produced the report ‘More homes, fewer complaints’ – says, ‘Housebuilders have driven down costs, and that has seen savings made by the loss of traditional functions such as the clerk of works. There is a need for monitoring, policing and inspection. At the same time, the architect has been pushed to the side, with the loss of its continuing role on projects.’

Add to that a now seemingly permanent skills shortage, and you arrive at 21st century UK house building, where when something does go wrong it can be costly, as Bovis has found, with £7m set aside to deal with its customer service issues. ‘The industry was already short on skills,’ says von Bradsky. ‘It has slowly emerged from a long and painful recession, which saw it lose skilled workers, and is now building more homes. Present issues are the manifestation of deeper problems.’ Mark Farmer says the situation is likely to worsen: ‘There are systemic problems that are getting more challenging. As we try to raise output it’s clear the industry is struggling, and when the industry is stressed, quality is compromised.’

The government is already taking action to build more technical skills generally, with the announcement in the spring Budget of proposed T level vocational qualifications for 16-19 year olds, and the introduction in April of a pan-­industry apprenticeship levy for larger employers. Its former construction advisor Paul Morrell has also been commissioned to carry out an in-depth review of the Construction Industry Training Board (CITB) and the Engineering Construction  Industry Training Board.

Alongside initiatives like BuildForce and Persimmon’s Combat to Construction – both aimed at encouraging former military personnel into the industry – the CITB and the Home Builders Federation (HBF) are collaborating to develop broader solutions. One issue they have sought to address is the gap in understanding between the industry’s small subcontractors and major housebuilders. Steve Radley, director of policy at CITB, explains: ‘There has been a lack of co-ordination between major housebuilders in indicating what their plans would mean for skills. So a lot of key skills, such as plumbing or decorating, couldn’t be confident of whether they could meet needs in the next 12 months.’ 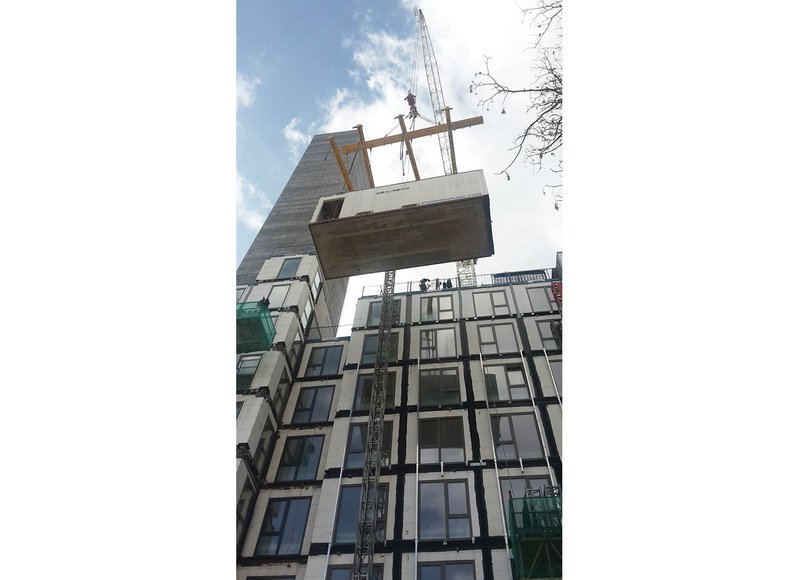 Modules being placed at a rate of 10 a day at Apex House in Wembley, London.

A shift to producing homes in the factory could be a solution, bringing greater certainty while also offering the potential to address issues such as quality control and difficulties in attracting and retaining workers. CITB has commissioned research looking at the skills required for a move to factory-built homes. ‘The research looks at the new skills and how existing ones would need to be redefined in a new context, as well as the potential for multi-skilling, so that training providers understand what it means,’ says Radley. ‘The next stage is to look at how the training sector can gear up.’

But factory building projects have also had their fair share of high profile failures, like the award winning CASPAR apartment scheme in Leeds, or Oxley Woods in Milton Keynes – the latter built under then deputy prime minister John Prescott’s Design For Manufacture scheme. ‘The programme was widely praised until Oxley Woods,’ says von Bradsky. ‘We need to be careful we don’t go down a route that fails to deliver. Offsite solutions have to strike the right balance between speed, quality and cost.’

Farmer says that factory build has evolved and needs opportunities to demonstrate that: ‘We have developed digital expertise and precision engineering. We need the innovative projects so that customers and funders can get comfortable with what this looks like. The driver for this should be a better outcome.’

While conventional housebuilders may see little reason to abandon traditional building methods, clients such as local authorities, build to rent developers, student accommodation providers and hotels are turning to offsite. These are the clients that Farmer and HTA’s Bergin see driving transformation in the sector. ‘Some clients like build to rent developers are taking a different approach. For them the build method becomes a strategic rather than a project question,’ says Bergin. HTA has seen a tripling in the proportion of its workload constructed offsite over the past three years, and it now accounts for around a fifth of the practice’s work. ‘We’ve been tapping into the market, but at the same time there’s accelerating interest,’ he says.

HTA is working with Scape Living, Donban Construction and Vision Modular Systems on Apex House in Wembley, north London, which has been described as the tallest modular building in Europe. Standing 28 storeys high and incorporating some 580 student bedrooms, the scheme’s modules have been going into place at a rate of 10 a day. The process means, says Bergin, ‘we have a crew of 150 working in the factory and just 20 onsite’.

At the same time as the Construction Leadership Council published the Farmer report last October, the government announced its accelerated construction programme, dedicated to supporting councils wanting to develop homes on surplus land, particularly using modern methods of construction. Since then the government has also published an industrial strategy green paper and the housing white paper – importantly, says Farmer, ‘both say skills and training need to be led by innovation’.

With government support and new clients keen to work in new ways, Farmer says he is optimistic that his report can be a catalyst for change. Ask him what makes him so confident and he says Brexit could ultimately tip the scales. A study by RICS estimates that more than 170,000 EU workers could be lost in a hard Brexit, a move that would have a dramatic impact on the industry, should it materialise. Farmer recognises the risks of a hard Brexit, but also looks further ahead.

‘Over the medium to long term it could be argued that Brexit could be a positive impetus for change. The industry will need to think more strategically about skills and productivity,’ he says. ‘I sense this is the right report at the right time.’