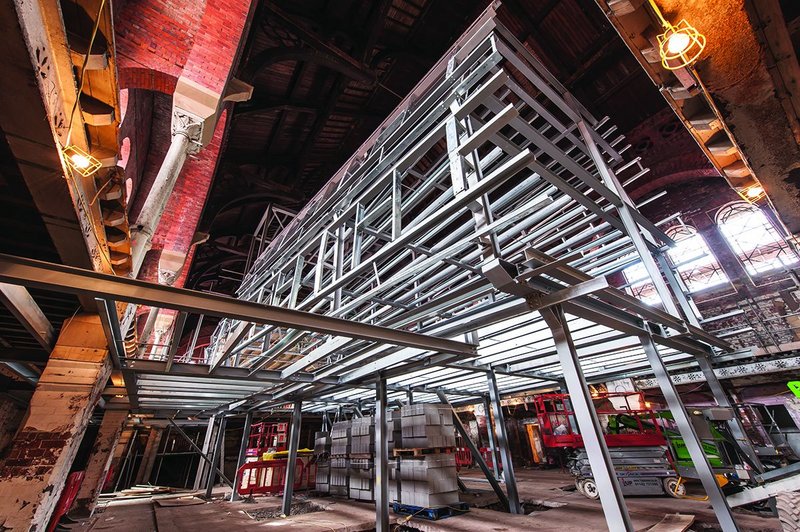 One of the oldest and largest municipal swimming baths in England has been saved from dereliction and reborn as offices with the help of a lightweight structural steel solution.

Ashton Old Baths, in Ashton-under-Lyne, was built around 1870 in an Italian Romanesque style with a 37m high chimney tower and a grand pool hall. The grade II* listed structure had been out of use for 40 years and was on the Buildings at Risk register before the £2.7 million conversion project, designed for client Tameside Borough Council in partnership with PlaceFirst.

This conversion follows many unrealised attempts to find a new use for the landmark building, including a proposal to fill it with shipping containers that could function as offices. The final project presented multiple challenges for the design team. Not only was there considerable damage to the 2100m2 building due to water ingress, but any new structure had to be constructed via a limited access opening just 3m wide by 2.7m high. 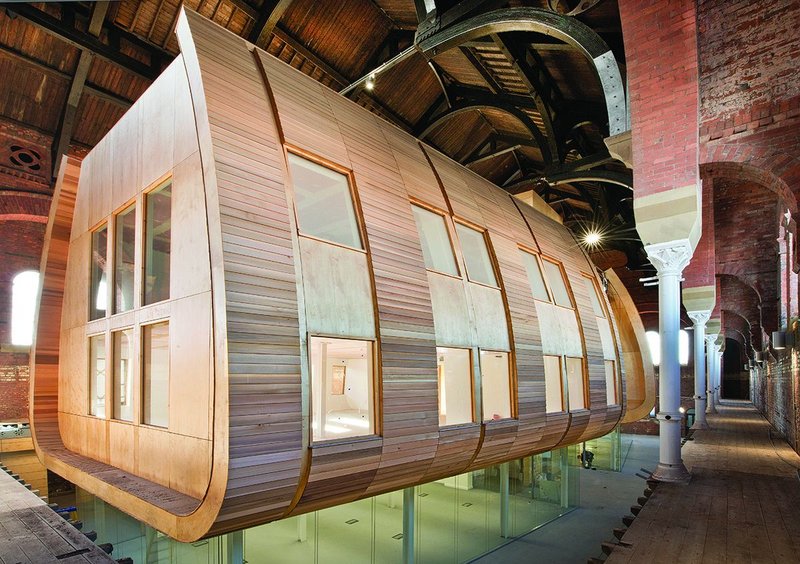 The architect, Modern City Architecture and Urbanism, favoured the idea of an independent structure within the pool hall that would leave the original building fabric as untouched as possible, according to director Neil Brown. Crucially this approach would allow circulation around the new curving structure and enable greater appreciation of the internal views of the historic pool hall, as well as being easier to construct.

The result is a timber-clad, pod-like form about 30m long and 11.5m wide. It provides three storeys of office accommodation topped by a roof terrace, and is located on the site of the pool, which was filled in several decades ago.

‘We wanted to do something quite bold that was fitting to its context,’ says Brown. ‘We felt something more organic would be more appropriate than a blocky shape. By curving the envelope, it dramatically enhanced the views.’

Steel was utilised both to stabilise the water-damaged structure and to create the new office intervention. A timber frame was considered but rejected because of the cost and the difficulty of fitting the components through the relatively small access door.

‘We proposed a lightweight solution that would deal with the constrained access and minimise the interventions in a cost-effective way,’ says Kevin Gilsenan, director of structural engineer Renaissance.

Another option, a steel frame with a concrete floor deck, was also rejected because of cost and the deeper floor build-up, which would have compromised the desire to maintain space between the pod’s roof terrace and the old roof. Instead, a simpler all-steel solution delivered by steelwork contractor BD Structures, combined with a lightweight plywood floor, gave a structural zone of 200mm compared with the 300-400mm of the composite solution, enabling more generous headroom of 2.6m.

‘If it had been any bigger it would have swamped the original building... We were keen that the intervention sat as an object in the space,’ says Gilsenan. ‘We worked with the architect so that it tapers on plan and you can look up and appreciate the original fabric.’

We wanted to do something quite bold that was fitting to its context. We felt something more organic would be more appropriate than a blocky shape. By curving the envelope, it dramatically enhanced the views

The pod is glazed at ground floor level to maximise daylight from the upper windows and give the appearance that it is ‘almost floating in the space’, says Brown. Above this, the structure is clad in plywood and western red cedar, swelling out into a barrel shape with the aid of cantilevered facetted columns. Brown feels it enhances the cathedral-like space. ‘As you walk around you get different views and vantage points and the sense of volume is always maintained,’ he says.

The new office pod was only possible because the cost-effective steel repairs to the historic fabric minimised the interventions required. Years of steam rising up from the pool and condensing meant water ingress had caused widespread rotting of the beams and support posts of the roof trusses, potentially leading to the need for propping and extensive replacements. 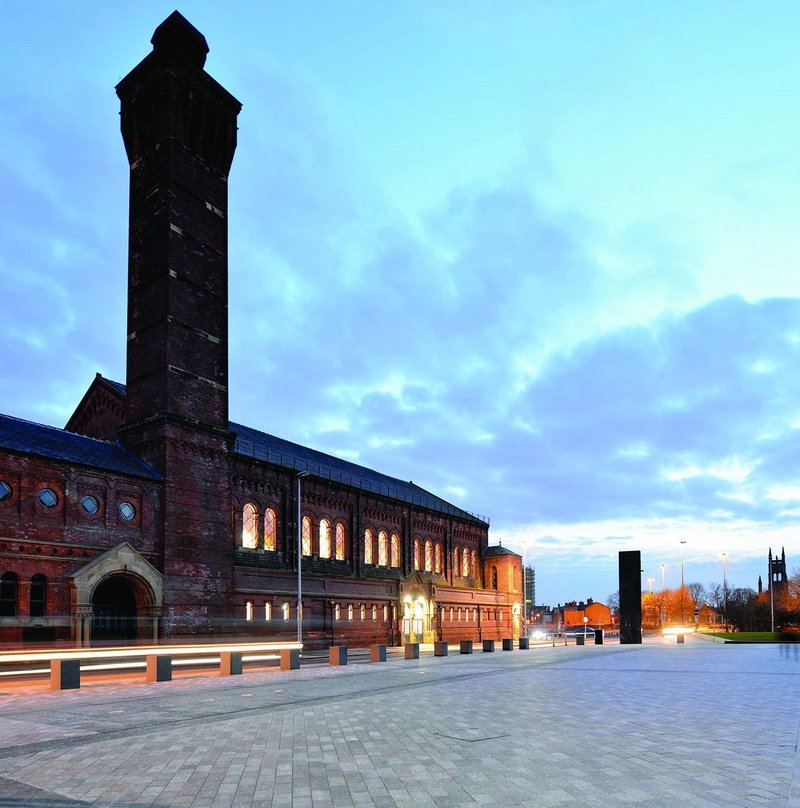 Renaissance created a 3D model to analyse the implications of the damage and discovered that only members with greater than 30% loss of section required strengthening. The firm then developed a steel flitch plate that took the load off the timber. Not only was this reversible, but it avoided the need for temporary works or the removal of the existing building fabric.

Steel was also used to strengthen the pool annex structure, which had a heavily corroded steel filler joist floor, also due to prolonged water ingress. Renaissance’s surveys found that many of the joists had corroded with 30-50% loss of cross section. To avoid intervention to the slabs themselves, it was decided to insert new intermediary steel beams where needed at mid span to strengthen the filler joists concrete slab. This effectively broke the span down from 3.5-4m to 2m.

‘This meant we didn’t have to do repairs to the existing slab,’ says Gilsenan.

This new structure carries the new imposed and super dead loads only, leaving all existing loads to be carried with the existing structure. This use of additional steel insertions avoided lengthy and more expensive repairs that might have used up too much of the project budget.

In total, 605m2 of new office accommodation has been incorporated in the building. 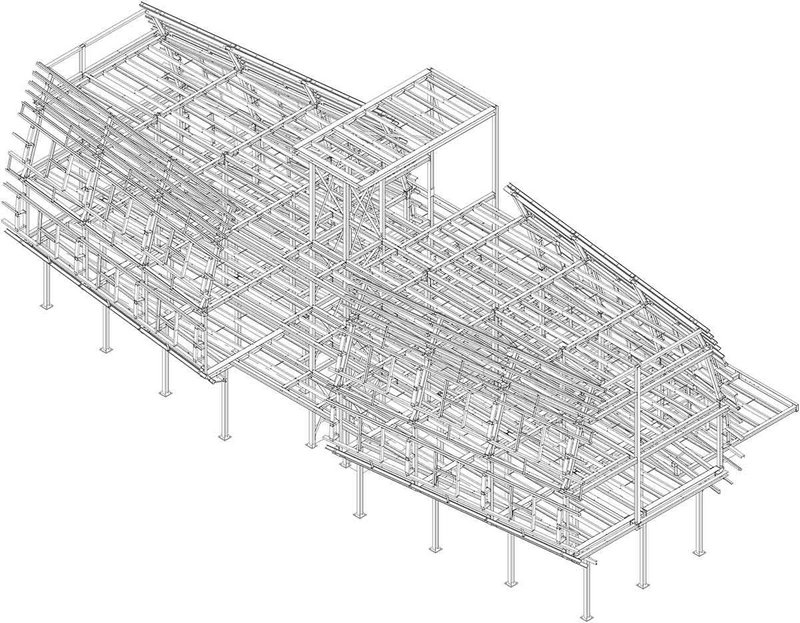 The steel frame (above) utilises 152 UC floor beams and columns within a 3.6m x 6m grid that ties in with the spacing of the original roof structure and supports. These are designed with minimal thickness to reduce the impact on the main hall, assisted by two rows of internal columns, which avoided the need for heavier beams. The structure rises above the top storey to form a 1100mm high balustrade for the roof terrace.

Structural engineer Renaissance wanted to keep the new foundations within the footprint of the infilled swimming pool to minimise intervention to the existing building fabric. Piled foundations were inserted beneath the columns through the infill and into the sandstone under the building to a depth of 15m. A transfer structure was created at first floor level to support the cantilevering upper levels.

‘Every piece of steel is different because it follows a curve on plan and in section. Each connection had a different angle and geometry,’ says Chris Heys, managing director of steelwork contractor BD Structures.

Constructed with bolted connections throughout, the pod was erected in six weeks with the help of a mini-crane. The process was slowed by the logistics of feeding 831 fabricated items – a total of 65 tons of steel – plus associated construction equipment through the narrow access point. The substructure and superstructure packages cost less than 15% of the overall pod building cost.