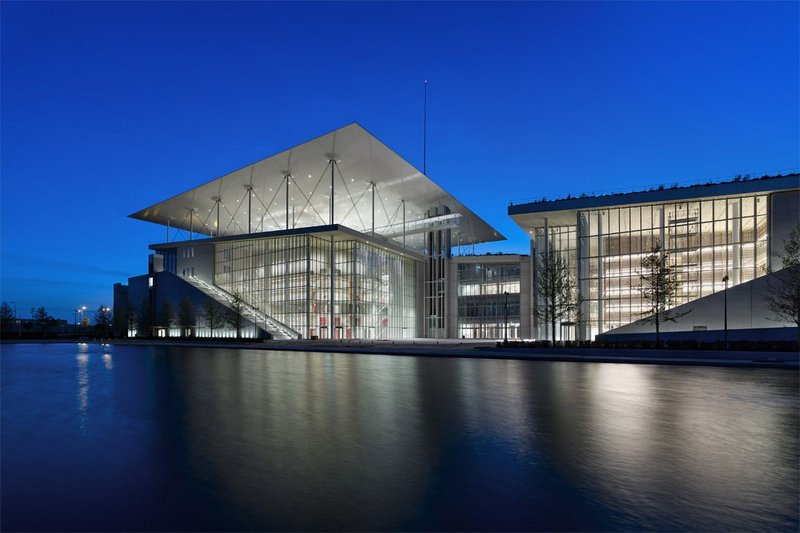 Canopy over the Opera House, and library. Credit: Yiorgis Yerolymbos

As I gaze up at the giant wafer-thin canopy hovering over the Opera House at Renzo Piano's Stavros Niarchos Foundation Cultural Centre, in Athens, the first thing that comes to mind is the bawdy Greek custom of plate smashing.

The 10,000m2 roof comprises two 2cm-thick skins of reinforced concrete, covered by photovoltaic panels. With just 32 slender columns for support, surely it should crumble like cheap crockery when exposed to a gale, let alone a major earthquake?

The secret to stability is an ingenious structural system that exploits the unique lightweight properties of ferrocement, an early form of reinforced concrete that has remained largely the preserve of DIY construction enthusiasts and self-build boat makers.

The structure is much lighter and thinner than one of equivalent reinforced or post-tensioned concrete and has a better strength-to-weight ratio.

Bruce Martin, associate director at structural engineer Expedition Engineering, told RIBAJ: ‘The pillow is structurally a very efficient form and architecturally it gave Renzo the very thin edges he wanted, preventing visitors from reading the actual thickness of the slab. It enabled a huge 75m by 50m column free span underneath the canopy at the centre.’

The circular columns transfer loads from the canopy into the Opera House roof, while diagonal cable bracing between the columns counteracts horizontal loads related to wind or seismic activity. The entire Opera House is founded on a base isolation system, designed to absorb the bulk of earthquake loads, making the idea of a slender roof possible in the first place.

In the intense Mediterranean sun, the surface of the canopy wants to expand and ‘banana’, rising at the centre as the edges drop. To prevent the structure from tearing itself apart, and to spread loads more evenly across the Opera House roof, the head of each column is embedded with a system of springs and bearings. These allow the canopy to rise and fall independently of the columns, while integrated dampeners limit the movement.

Piano wanted the canopy to be a 21st century engineering masterpiece for Greece, but his grand ambition was always underpinned by the understated versatility of ferrocement, says Martin: ‘What’s great about this material is it gave us the structural requirements, the architectural form, the finish and the waterproofing, all in one. It allowed us to do very beautiful things, such as create a discrete rainwater gutter where the top skin peels away from the bottom around the perimeter. It gave us great scope to integrate many things together, which was very satisfying.’