Heneghan Peng has sculpted this museum site into a celebration of the Palestinian land, to bring a rare openness to the West Bank 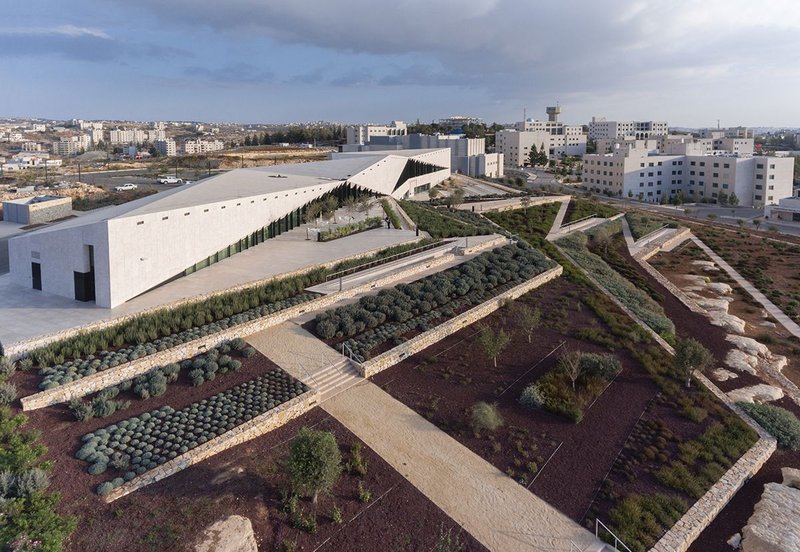 Looking towards the west elevation of the Palestinian Museum, the building manifests itself as an element in a much wider landscape. Credit: Iwan Baan

Palestine has had few opportunities to represent itself through architecture; so finding an appropriate form to tell the weighty story of its history in built form was always going to be daunting. Dublin-based Heneghan Peng’s 2011 competition-winning design for the Palestinian Museum responded to this difficult brief with a building that derives its form directly from the landscape.

Established by the Welfare Association, a non-profit organisation that develops humani­tarian projects in the West Bank, the museum is a cultural institute that aims to ‘transcend borders’. Given travel restrictions and the building’s location in Birzeit, 25 miles north of Jerusalem in the West Bank’s Area C, visitor numbers were always going to be limited. The institution’s role as a centre of research, and its lofty aim to be a symbol to connect Palestinians scattered all over the world, gave the museum’s visual appearance added importance.

Adept at working in sensitive locations, including the UNESCO sites at Giants’ Causeway and Greenwich, Heneghan Peng turned to the site and the wider landscape of Palestine for inspiration. While for many projects landscaping is an afterthought, designed to fit around a building that has already been determined, on this project it was the landscape that was considered first. The result is a building and its surroundings that truly act as a unified whole.

‘The common theme in our work is that we address the problem of the brief by examining the site,’ explains project architect Conor Sreenan.

Like much of the occupied Palestinian territories, the museum’s plot was on an inhospitable hillside. Shaping this rough terrain into usable land through terracing, as farmers have done for generations, was the starting point for the design team. ‘The design is inspired by the way the land has been traditionally manipulated’, says Jordanian landscape architect Lara Zureikat, who worked closely with Heneghan Peng on the project. ‘The idea was to represent the landscape of both the natural and the cultural.’

The site’s landscape was ordered by straightening its contours to create a series of angular terraces across the site: ‘We set up cardinal points along the edges of the property’, says Sreenan. ‘And what we did was a simple game of joining the dots across the museum’s land.’

Visitors to the museum arrive at the foot of the hill and first see the 3,500m2 building, a double-wedge that occupies the ridgeline of the hillside, as a continuation of the terrace aesthetic. Although access is from the top of the site – passing through the centre of the building before descending through the gardens on a series of ramps – it is the progression from natural to man-made that ties the project together. ‘The strategy works from low to high,’ says Sreenan. ‘A mixture of cutting and filling was used to complete the narrative with the building emerging from the landscape.’ 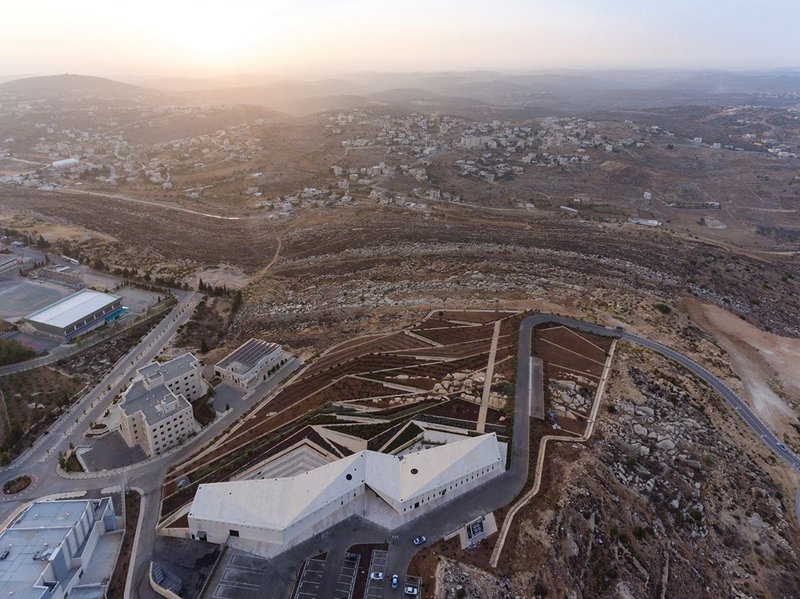 The museum and its landscape have an aesthetic generated by the city edge site, part of a bigger urban and state narrative. Credit: Iwan Baan

The feeling that the landscape was being brought into the site was essential for this narrative, so to maintain the flow at the site’s boundaries, instead of a high wall there is only a fence. Projecting a welcoming air, in obvious contrast to most institutional buildings in occupied Palestine, was also important to the wider message the institution is trying to convey.

Security specialists employed later in the design process recommended 2.4m high walls, but the museum stuck with the architect’s vision. ‘It was important that the building was accessible to all and communicated a message of openness,’ emphasises Sreenan.

This desire continues within the site where the ethos determines the height of each terrace at 720mm, the maximum height permissible without a balustrade. Construction of these terraces mirrors traditional techniques, with much of the stone extracted from the site used in the retaining walls. While on the lower terraces these are purely from stone, the upper terraces are concrete faced with local stone.

‘What we have built is traditional, with some modifications,’ says Feras Tubeileh, principle of Tubeileh Engineering & Contracting Company (TECC), the Palestinian sub-contractor with responsibility for the earthworks packages, substructures, super structures, envelope and fit-out works. ‘If you go into the mountains you can see these walls. They translate into English as gravity walls, as their own weight will prevent any erosion.’

The terrace planting, led by Zureikat, reinforces the narrative of progressing from the natural landscape to the man-made. ‘The higher up the terraces you go the more dense and refined the planting becomes,’ she says. The lowest level acts as a meadow, followed by terraces planted with crops local to the region such as pomegranate, wheat, olive, chickpea, almond, apricot and walnut. On the upper terraces is sensitive ornamental planting including lavender, rosemary, rockrose, saltbush and lantana.

This planting strategy has an important impact on the irrigation, as those terraces further from the building require less water. Once the native planting on the lower terraces has bedded in, artificial irrigation can be switched off and these plants will thrive on rainfall alone, further reducing the water requirements.

To irrigate the large planted area, Heneghan Peng devised a rainwater harvesting system that stores reserves in three underground tanks beneath the café terrace. In a land where water is a precious commodity the system aims to allow the museum to be water independent.

‘We don’t have enough water reserves, so the building, in a way, represents Palestine,’ says Tubeileh. ‘Some farmers do not have access to [water for] their land and you can see the trees slowly dying. Having control over the water was very important for the museum.’

Visitor access, as well as access to water, aesthetic recognition, and a tumultuous history, have made the success of the Palestinian Museum a robust story. Although at first some Palestinians resisted the idea of a foreign architect bringing an architecture that was vastly different to that already existing in the occupied territories, the commanding narrative has created a building born of the Palestinian land. Tubeileh sums up the current sentiment: ‘Internationally, the building has received a lot of attention. It is in harmony with the context, not a direct imitation of traditional Palestinian architecture, but a reinterpretation of it.’