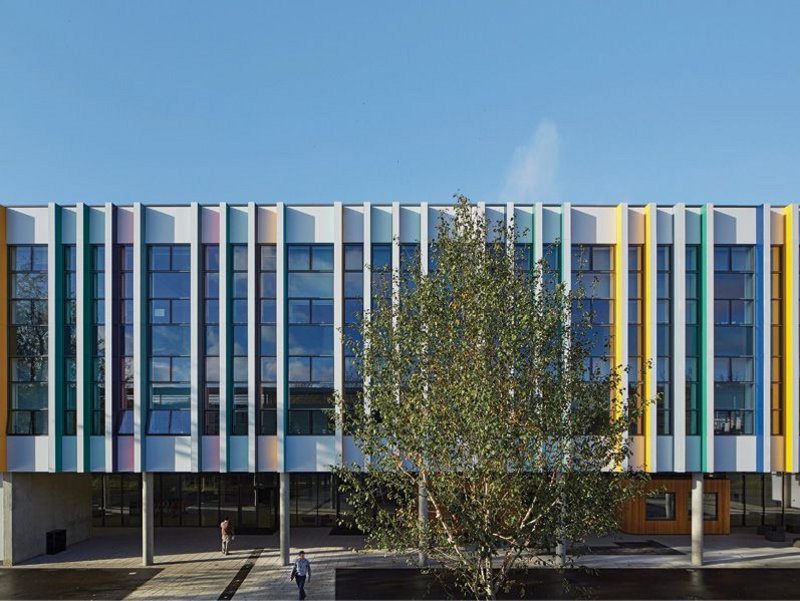 At a packed PIP Education Buildings seminar at 66 Portland Place on a warm, windy spring day, it seemed the theme was ‘context is everything’. It was good to see the room’s cross ventilation in action too – a reminder of one of the strategies used in the three lovely educational facilities discussed at the morning event, chaired by Hawkins Brown partner Carol Lees and sponsored by Formica, Oscar Acoustics and Jacksons Fencing.

Sensitivity to listed buildings and a mature landscape on the fringes of London was required of architect DSDHA at its award winning Davenies School, an independent prep school in Beaconsfield. The school was established in 1940 in a now-listed farmhouse surrounded by agricultural buildings, explained senior associate Isabel Moreira.

The firm had to provide 10 new classrooms and a library, weaving around a built-out and undulating site. This challenge, said Moreira, unlocked the whole project. DSDHA’s response opens out to key views while black ‘waney’ edged timber picks up on the agricultural vernacular. 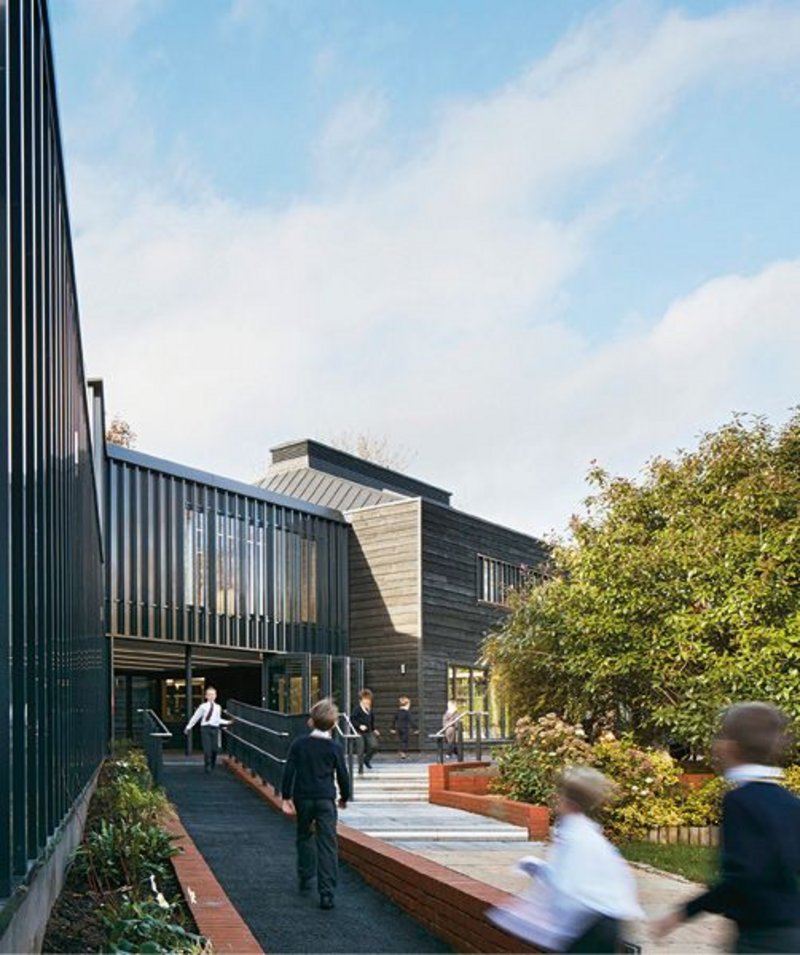 DSDHA worked with CLT company KLH on solid timber off-site construction, allowing them to meet the deadline of the new academic year. It also resulted in a highly tactile exposed timber interior ‘that works both visually and acoustically’ and references the sylvan setting.

Its cleaned-up brick, white painted steel and rendered walls are popular with pupils. ‘The counterpoint of old with new creates a great sense of scenography,’ Bonfanti remarked. ‘The kids have totally taken it over.’

Beethoven was one of the drivers for the facade aesthetic, said practice associate director Rob Hill. Sixty percent of the new facade is glazed, with solar shading provided by aluminium fins hung off the curtain walling. The bright colours of the 54, 10m high fins are inspired by the work of US artist Donald Judd and their rhythm by the notation of Beethoven’s Für Elise. Opening vents, part of the natural ventilation strategy, are co-ordinated with fin runs. 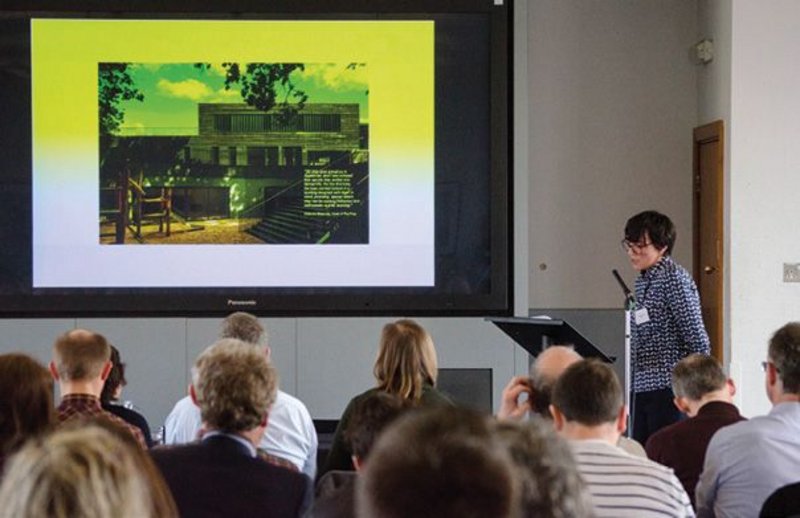 Isabel Moreira of DSDHA speaking at the seminar.

There was less stitching in and more standing out from Michael Laird Architects at the 15,000m2 Riverside campus for last year’s Stirling Prize shortlisted Glasgow City College, carried out with fellow Edinburgh firm Reiach and Hall. ‘Near the Gorbels on the south side of the Clyde, there was a clear desire for the new campus to revitalise this part of the city,’ said Adam Frickleton, associate director at MLA. ‘The education building, workshops and residential tower and 7m high colonnade around a garden were all about creating a real sense of civic presence.’

A limited palette of materials unifies the programme functions: precast concrete, stick system cladding of soft-sheen anodised aluminium, and glass. Internal materials are also pared back, with exposed concrete soffits and walls and expanses of glass overlooking the atrium. Acoustically, these surfaces needed managing. Frickleton said the acoustic design was ‘a triumph’, with timber slats and perforated, insulated metal panels soaking up sound from where it’s made – the main reception area.

Mitigating bad acoustics in education buildings has been close to Oscar Acoustics’ heart since its founding in the 70s, said director Ben Hancock in his talk on the firm’s work at the Stirling shortlisted Blavatnik School of Governance in Oxford by Herzog & de Meuron, where the approach was ‘to integrate acoustic attenuation with the building form itself’. In the circular atrium, H&dM had faced time constraints that precluded layered acoustic plaster and had struggled to fit acoustic panels to its curves. The solution was Oscar Acoustics’ SonaSpray fc, its a fine-textured finish effectively dampening sound in the grand circulation space. 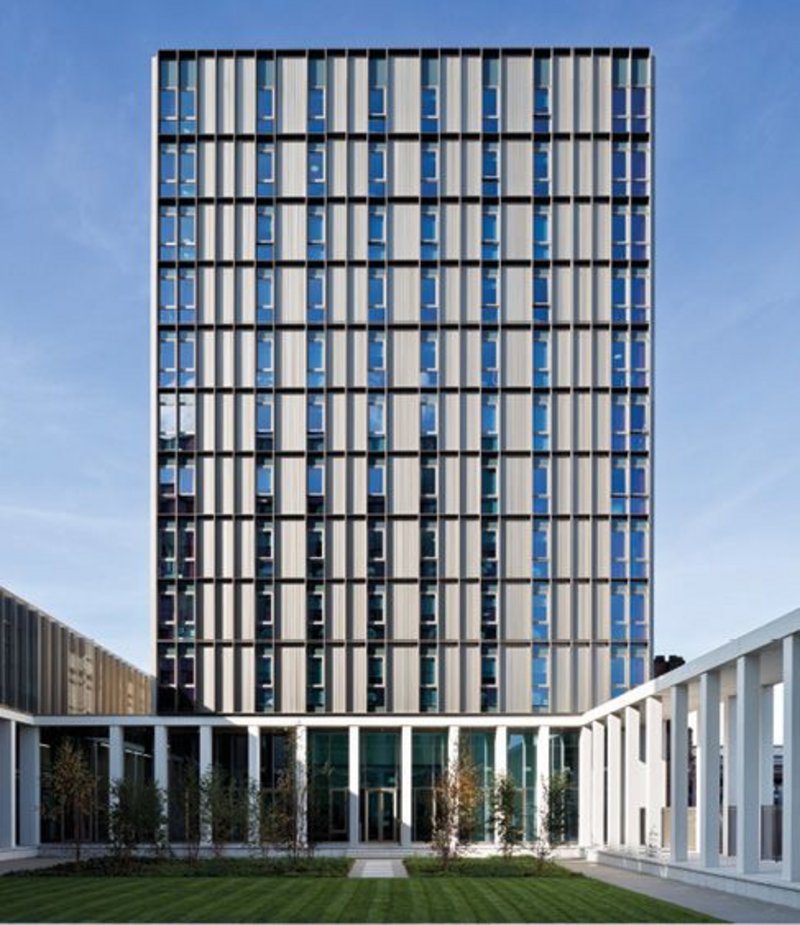 Co-sponsor Formica was more preoccupied with the exteriors of education buildings. At the Silsoe CofE Lower School in Bedfordshire, David Turnock Architects wanted to use a rainscreen panel of blended natural woodgrain effects to create an abstracted facade, explained Roy Hornibrook, Vivix key account manager at Formica. The practice opted for 8mm thick Vivix panels that, he said, offered ‘superior performance’ for durability and insulation.

Formica offers advice on specifying panels in schools. ‘We’ll appraise if gap widths or edges are suitable where kids might put fingers,’ Hornibrook said at the post-talk Q&A. ‘We always ensure Vivix is robust enough to take a kicking but detailed so as not to harm users in any way.’

Jacksons Fencing, 70 years old this year, is committed to safety in schools. Its head of commercial sales, Cris Francis, discussed its range, saying it could all be Secured by Design accredited. Bespoke products include cranked steel centre pales off brick piers for more strength; RoSPA approved palisade fencing curved at the top so as not to offer sharp edges; ‘hit and miss’ fencing to reduce lines of vision; and dampening devices on steel gates to avoid trapped fingers.

But in the end, it came back to context. Francis showed a charming shot of one of its straight steel fences performing a nifty tight arc around the gnarled trunk of a tree – highlighting how, ultimately, nature will always have its way.