A steel and ETFE disc has landed in Brussels, bringing long lost excitement to a once grand square 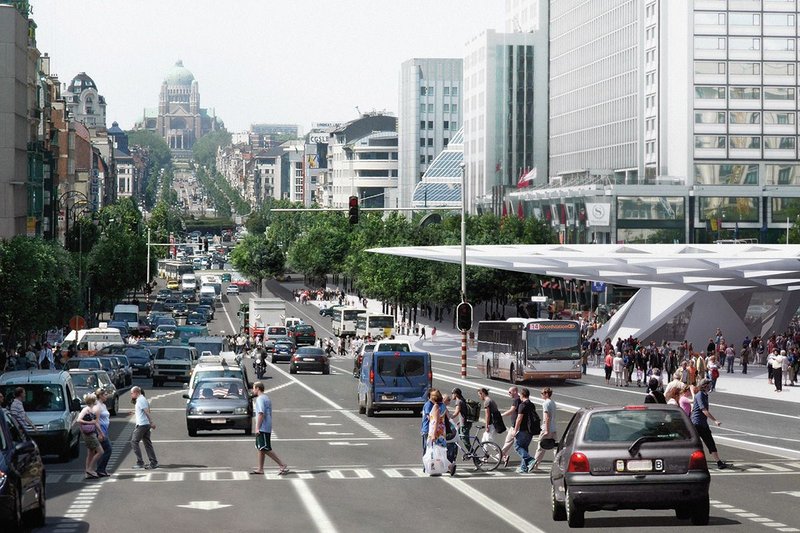 As an expanding Brussels entered the 20th century, it was Place Rogier that fell victim to the drive to give the city an appropriate infrastructure. The square had originally terminated the axis of a grand shopping street in front of the Beaux Arts North Station, constructed in 1846. But the 1930s saw a proposal to build not only a north south tunnel connecting the city’s central and south stations, but also to create a fresh urban quarter further north with its own terminus, unlimited by the strictures of the existing station. Completed in 1952, the new North station made Place Rogier redundant; the old station was demolished, replaced by commercial developments, and Place Rogier shrank from busy urban interchange to windswept car park on the centre’s northern fringe.

In 2006, to turn around the bad fortune of the square, the metropolitan government put out an open call to architects to suggest ways of reinvigorating it. With its proposal for reinventing the existing metro station to make its daily people moving part of the life of the square, local firm Xaveer De Geyter Architects (XDGA) was appointed with Belgian engineer Ney. Ten years later, and after a host of unrelated infrastructure problems, that process is nearing completion: a huge steel disc hovers alongside the R20 boulevard, as it runs west to the Art Deco National Basilica.

The 65m diameter disc is merely the most visible part of a €30 million project to reconfigure the metro station and connect its platform levels to the surface. This involved cutting a 30m by 15m hole into the pavement and opening the lower concourse level two storeys down to the air. The station is now accessed by escalators running diagonally through the space and a dramatic spiral staircase. Above this sits XDGA’s 230t bespoke steel structure, a sharp perimeter ring beam inset with a mesh of triangulated steels – some with timber infills, some clear to a tensile ETFE skin that stretches over the canopy. Though centrally supported it leans assymetrically towards the square; the designers had to jump through engineering hoops for a bigger aesthetic intent. With a total area of 3,200m², architect Tom Bonnevalle explains that the idea was to ‘generate a roof form that was visible from all the approaching streets to create a landmark presence along the boulevard. We felt the circle was a simple form that everyone gets,’ he continues, ‘an iconic form that forges a strong identity for the square as well as becoming part of the wider urban realm.’

But the strategy was easier said than done. The whole canopy structure sits above an operating station and engineers at Brussels Metro were adamant that no extra columns could be brought down to track level to take any additional loads or allow any forces onto the tunnel roof. This meant Ney could only use eight existing columns to take the eccentric loadings of the huge leaning canopy structure above. ‘The problem was that centre of the canopy was above one column so all the load forces wanted to transfer into that,’ recalls Ney partner Kenny Verbeeck. ‘Because we couldn’t overload it we had to work out a strategy whereby the loads were more evenly distributed across the columns.’

In the end the firm settled on a raft of beams and reinforced concrete forming a rectangular area of 23.2m by 19.8m centre-to-centre resting on the eight columns, sitting above the tunnel roof structure but imposing no load at all on it. Verbeeck explains every single beam within this grid is bespoke, as the raft is acting to try and redistribute the assymetrical loads of the cantilevering canopy. The problem was compounded by the fact that they were having to deal with environmental factors too. Not only is it leaning out but the down draught from the surrounding towers was potentially causing uplift to the underside of the disc. ‘All the time we were having to make the raft not only deal with the self weight forces of the structure but also make sure these upthrust forces were in equilibrium,’ he explains. The result is a reinforced ‘mesh’ of beams that run from 400mm to 900mm depth across their length, successfully evening out the complex loads over the eight columns. This strategy deals with both compressive forces pushing down on the road side and the upthrust forces on the plaza side, the design team effectively ‘using the entire subway station as a counterweight for the canopy’.

Interesting here too was the game of give and take that occurred with the loadings of the footings themselves. The engineers found there was room for play with the weight of the soil they removed to build the foundation raft. The dead weight of soil is about 1.8t/m3 but lightweight concrete comes in at around 600kg/m3. ‘In replacing the 100sqm soil for concrete below each of the reinforced four columns supporting the canopy’s three-dimensional pier we gained  around 100t of loadbearing potential that we could offset against the deadweight of the canopy. It turned out to be a very nice equilibrium,’ explains Verbeeck.

It is the move from an orthogonal base to a hexagonal ring beam at the centre of the roof canopy that produces the strange, faceted, shapeshifting steel and glazed section of the central pier – a very pragmatic approach to resolving the forces that need to be transmitted down from the disc to the station’s columns. The triangular facets this creates in elevation are replicated in plan in the roof, whose circular geometry is resolved structurally through a hexagonal form broken into constituent triangles.

It took some time to arrive at this approach, says project architect Karel Bruyland, having first looked at ‘circular patterns, radiant lines and about 20 other alternatives’. It is a solution that, Bruyland admits, is slightly compromised where it interfaces with the steel perimeter ring where the beam form warps slightly to maintain the triangulation. ‘It’s an unavoidable geometry which you hardly notice in plan but which you can see in reality if you look for it – but the alternative was that the triangular beams wouldn’t meet where they hit the ring beam’. While Verbeeck says that, as an engineer, he appreciates the current iteration of expressed structure, he agrees with Bruyland that once timber infill panels are inserted in the canopy, it’s less likely that these edge condition anomalies will be perceived. ‘It will become less of an elemental thing and more of a homogenous form,’ he thinks, ‘which should make it feel calmer.’

As for the roofing material, it became clear that, with loadings critical on this project, the extra 400t that glass would have been imposed ruled this out at an early stage. The team instead opted for ETFE, but was concerned by the aesthetic effect of pillows. ‘We always felt the idea was to visually clean up the square but the use of pillows, with their seams and tubes, would make a fussy form, which went against our aesthetic intent,’ says XDGA’s Bonnevalle. So instead it opted for the single layer of ETFE that tops the structure, with a run of fine steel tension wires bonded into the membrane and pinned back to the triangulated beams, which drops 3.5m over its 32.5m radius. The innate flexibility of the ETFE brings additional benefits as it is very forgiving of the 300-400mm ‘play’ of the eggshell-like structure under wind loading.

And despite being beset by delays due to the recent discovery that Belgium’s metro network is plagued with waterproofing issues (which saw half the landscaping on this project having to be ripped out and re-installed) it seems like the end is in sight for Brussels’ new UFO. With the far more people-friendly landscaping stretching out from below XDGA’s huge, shallow disc, even though the project has involved engineering challenges and compromises with the transport network and two city municipalities, Bruyland thinks the design intent has by and large, been preserved. ‘We hope that in creating this massive canopy in Place Rogier at the end of one of the city’s most important streets, that we are reminding it of the historical relevance of this place; bringing order back to a square that has only been defined by chaos since it lost its station,’ he concludes.