A pair of Victorian semi-detached houses in Oxford become a home, in a contextually modern makeover 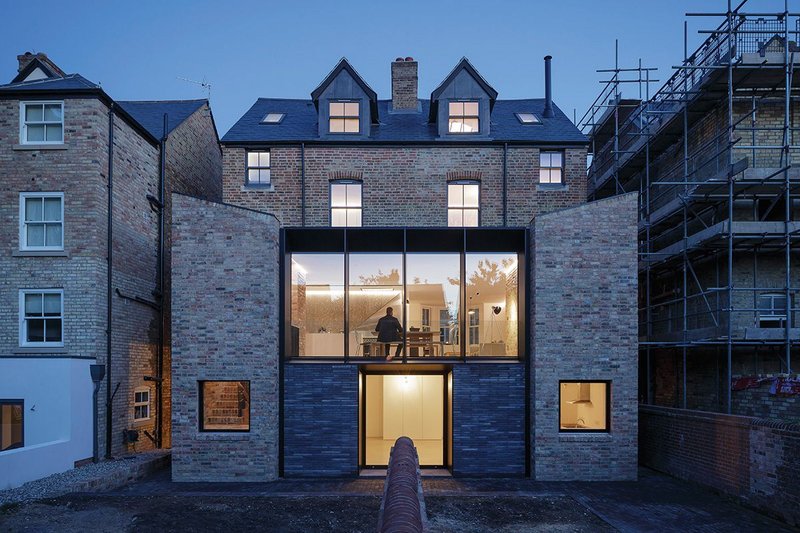 The garden elevation extends both houses’ rear extensions and builds between them to form one of striking, postmodern symmetry. Credit: Tim Crocker

In a quirk of an age-old funding gap, Oxford University’s Worcester College, added to in fits and starts by the likes of Hawksmoor, James Wyatt and William Burges, still retains, as the south side of its main quad, a row of medieval workers cottages, even now functioning as a working part of the college.

Perhaps it’s the humble domestic origins of the institution that found them amenable to releasing for sale some of their residential estate, until recently used as student housing. No doubt sold to plug some present-day funding gap, the upside is that it released a pair of Victorian semi-detached homes for snapping up by a London couple and their three children, quitting the city for a more sedentary life in the university city.

London architect Delvendahl Martin had a six year old relationship with the client, borne of the fruitless task of helping find them a suitable home in the capital, and was retained by them to look at the wholesale knock-through and change of use of this former house of multiple occupation into a large single family home to accommodate their growing needs. The result reifies the houses’ conventional brick rear extensions and introduces a new, formally distinct block of living accommodation between them, picked out in a plum coloured Kolumba brick, to produce a garden elevation of contextual modernism and compelling symmetry.

The main internal move has been to create a generous, first floor family living area, accessed both from the existing hall staircase at the front of the house and from a new reclaimed brick stair at the rear – the latter, with a huge sheet of glazing above letting the daylight pour in, now being habitually used by the family. The living area, overlooking the garden, forms the focus of the home, its oak board floors unifying the space. Deep anodised aluminium fins on the huge window to the garden meanwhile offer privacy for the family and their neighbours.

Here too is the biggest indulgence in the home; the staircase to the second floor, running against the grain of the houses, passing through the buildings exactly where the party wall would have been. In line with a client’s desire for simple material expression, this luxury has instead been manifested in stained birch ply, a box-like form that leads to the second floor bedrooms – the openness on both levels only made possible through the fitting of a sprinkler system and hidden doors that close in the event of a fire.

Balustrades, handrails, handles and light fittings are bespoke and have been designed by the architect in natural materials to complement the owners’ desire for a warm interior look. They prove to be details that have been brought through consistently from outside to in, from one house to another.