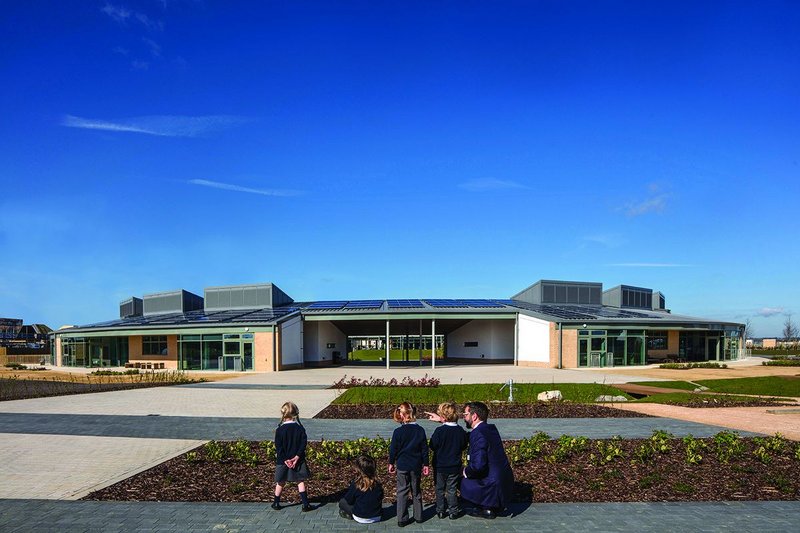 Future-proof may be an overused claim these days, but Marks Barfield’s University of Cambridge Primary School makes a very convincing case for being just that.

With built-in capability for internal reconfiguration, extra ventilation provision for 2050 climate conditions and an expansion strategy, this highly unusual school is well prepared for all kinds of change.

This flexibility is due in no small part to a lightweight steel structure chosen to suit both the need for reconfiguration and the soft ground conditions of the former farmland site on the outskirts of Cambridge.

‘We wanted the minimum weight of building and didn’t want to spend a lot of money in the ground,’ says Marks Barfield managing director Julia Barfield.

‘Steelwork helps in that respect, as well as making sure the school had future flexibility. A steel frame enables walls to be moved to create new learning layouts independent of the structure.’

Unusually, the school was built not by a local authority or academy chain but by the University of Cambridge as part of its North West Cambridge Development of affordable housing and community facilities for staff and students. The first primary university training school in the UK, it is also the first piece of the masterplan to be completed.

The links to the university education department influenced the design of the school, along with a set of core educational principles including the need to create an open, inclusive pedagogy with democratic and non-hierarchical space which could be divided into smaller school communities as well as containing a variety of learning and play spaces. The design was also informed by the school’s desire for all classrooms to have level access to outside space, and by a Forest School-type approach to the outdoors.

Marks Barfield wanted its design to align with this educational ethos. It researched historic and contemporary examples from around the world, including the democratic organisation of Finnish schools as well as the Cambridge ‘village colleges’ pioneered by Henry Morris from 1922-54 and school designs by Herman Hertzberger.

The result is a circular ring of accommodation with a single storey of classrooms having access to either a 50m diameter inner courtyard – inspired by Cambridge college quads – or the perimeter outside space. Classrooms are arranged in three clusters of six classes plus an early years cluster. The outer radius stretches about 46m with an inner radius of 24.5m. Covered spaces between the buildings create sheltered play areas and routes between the two outdoor spaces.

The design team considered cross laminated timber (CLT) for the main structural frame, but felt steel had the advantage of allowing easier configuration of internal walls. Its light weight also reduced foundation costs, with the engineers using Vibro rather than traditional piling.

‘The steel frame enabled us to articulate a radial grid and achieve a long span, open plan structure without any solid walls in the layout,’ says Vishal Borhara, project director of structural engineer Parmarbrook.

Without bracing or shear walls, lateral stability was achieved through the fixed connections, and the challenge was to achieve this elegantly. ‘The architect was keen on expressing a lot of these so we needed to keep them quite sleek,’ he says.

The double-portal frame allows spans of up to 12m. The structure is arranged in three rows of columns spaced on a 5m grid on the inner radius, and 8m on the outer radius. Columns are a combination of universal column H sections and rectangular hollow section columns. According to Steve Worner, project manager at steelwork contractor William Haley Engineering, the biggest challenge was connecting the rectangular columns. This was achieved by pre-welding a stub onto the top of the column – concealed in the ceiling – which enabled a bolted connection to the beam sections to be made on site.

The inner courtyard is ringed by an elegant cloister, providing more covered space and circulation as well as containing the artist Ruth Proctor’s work We Are All Under the Same Sky within its glazed roof. 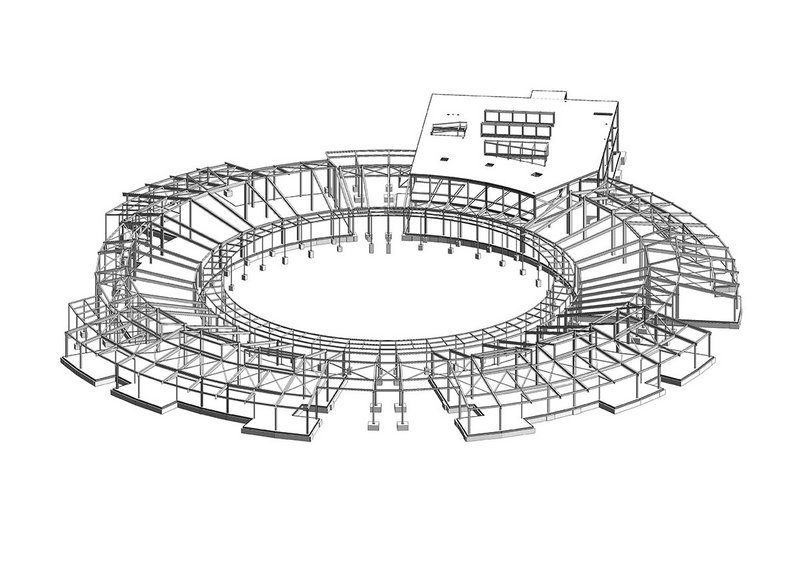 ‘We worked very closely with the structural engineers and steelwork contractors to make the structure as light and slender as possible,’ says Barfield, adding that they were particularly inspired by a simple, glazed Arne Jacobsen canopy at a school in Denmark.

The only two-storey structure is the 35m x 26m communal block and entrance, which contains all the common parts and, as the civic face of the school, addresses the key  approach road of Turing Way. Transfer structures enable a column-free main hall.

Internally, the circular plan means there are no dead-end corridors, and provides for easier circulation. This is achieved via an internal, double-sided ‘learning street’ with library areas, storage and toilets. This 4.5m wide space can also accommodate university staff and students, with unobtrusive observation made easier by the decision to have no doors on the classrooms – they have wide openings onto the street. A number of rooms with doors are provided for occasions when more seclusion is required. The street also enables natural ventilation of the school through vents in the roof.

Classrooms average 60m2 in compliance with BB99, significantly larger than the BB103 standards introduced subsequently, which stipulate 55m2 as general and 50m2 when there is a shared learning area. The  university training function gave an extra 4m2 per class, which was used to make a dining room in the communal block where  pupils eat in mixed age groups.

While the architects describe the atmosphere as ‘very serene and calm’, it’s early days yet for the three-form entry school, which won’t be at full, 708 pupil capacity until 2019.

If more accommodation is needed for four-form entry, Marks Barfield has a strategy to create six more classrooms by pushing the art room, nursery and reception classes from the inner to the outer ring of the radius. 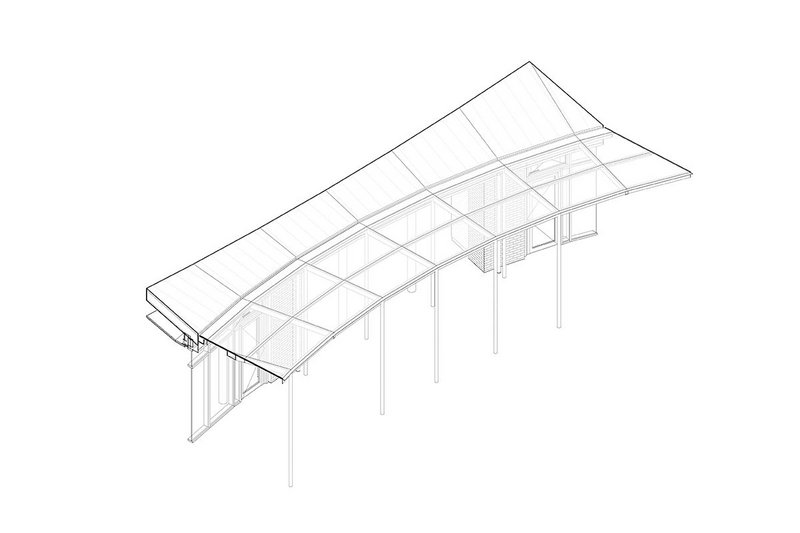 A 2.7m wide, circular glazed canopy (above) forms the inner ring of the school around the courtyard. The steel structure, which is independent from the main school frame, needed to be particularly sleek and elegant in design with unobtrusive connections so as not to overwhelm the integral artwork of 67 images of skies from around the world. These are laminated as digital screenprints into the canopy glazing units, and the structure was specially designed to cater for the tolerance of the glass, according to structural engineer Parmarbrook’s Vishal Borhara. The canopy rises from 3.7m high closest to the main building to approximately 3.9m on the inner edge of the ring.