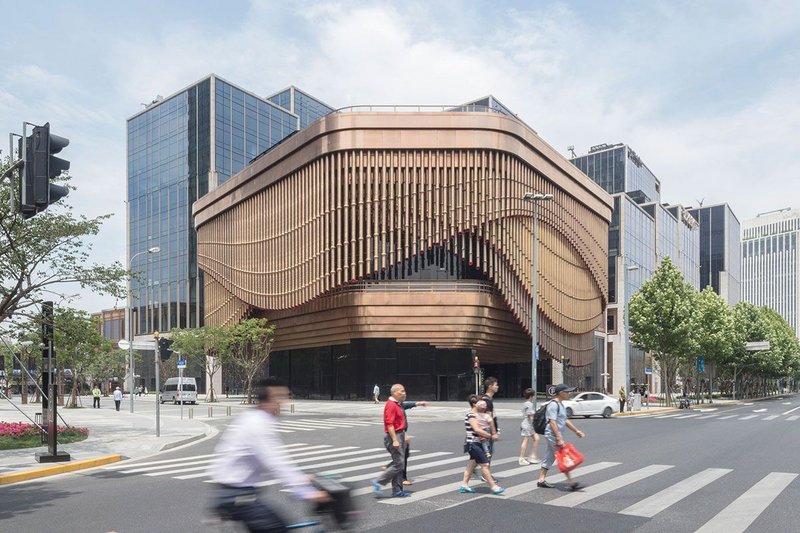 With the moving facade, the client’s aim was to create a signature building for Shanghai. Credit: Laurian Ghinitoiu

Shanghai’s Fosun Foundation cultural centre has a rare party piece. With a tap on the touch screen controls, the triple layers of its veil-like facade rotate around the building on individual tracks in a gleaming choreographic display.

Even by the standards of Heatherwick Studio and Foster + Partners – who have jointly designed the centre as part of their recently completed 420,000m² Bund Finance Centre in Shanghai – this overlapping kinetic facade is rather extraordinary.

‘The client wanted something special. We did a lot of local research and were inspired by the open stages of traditional theatre in Chinese villages and also by traditional bridal veils which have lots of tassels,’ says Heatherwick Studio senior site architect Leo Cheung.

Within the eight-building masterplan for the site, the cultural centre is the social focus. It is designed to relate to the relatively low scale buildings of the nearby Bund waterfront and mediate the transition to the larger-scale new buildings within the Finance Centre, which rise to a height of 180m. Its bronze tones are a reference to the bronze finishes found in 19th century buildings along the Bund.

Both the embossed veil of the culture centre and the CNC-cut stone used on other buildings in the development reflect the ambition to create a sense of depth, detail and craft.

‘From day one on the project we decided to use skills that are available in China but not elsewhere. We were always looking to create a development with an extra dimension and that came out in the details,’ says Foster + Partners senior executive partner Gerard Evenden. 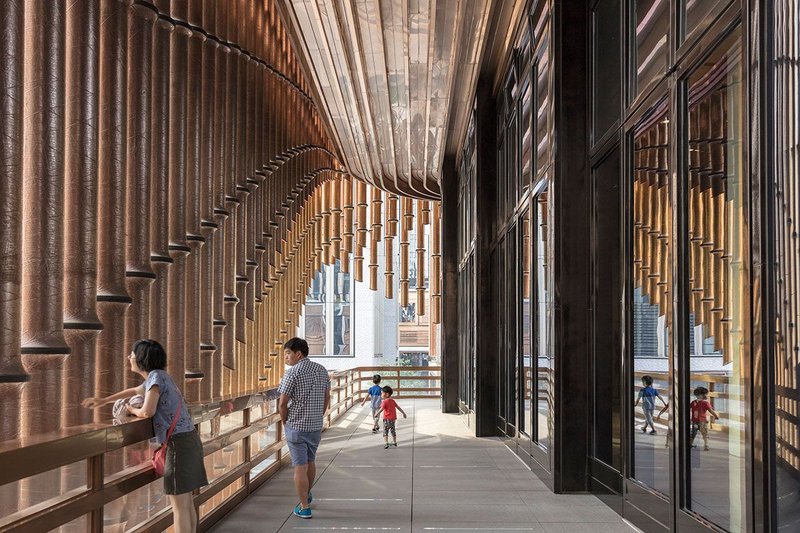 When in motion the facade moves at a pace of 10m/min. Credit: Laurian Ghinitoiu

With no single use identified for the cultural centre, the designers created a facade that could respond to different functions. It moves to reveal the stage on the balcony and the inside of the multi-function hall when there are performances, and to give views out towards the river to the east or to the other buildings in the development to the west. Both facades are fully-glazed behind the veil at Level 2, where the multi-function hall is located. The design team worked with engineer Tongji University on the logistics of the moving facade, which had to be able to withstand a Level 12 (typhoon) wind without the tassels touching each other. This involved building a prototype building with 146 tassels to test the effect of wind loads on them.

The designers’ initial idea of eight layers of tassels for the veil was reduced to three to meet weight restrictions. ‘We had to strike a balance between aesthetics and all the technical requirements,’ says Cheung. 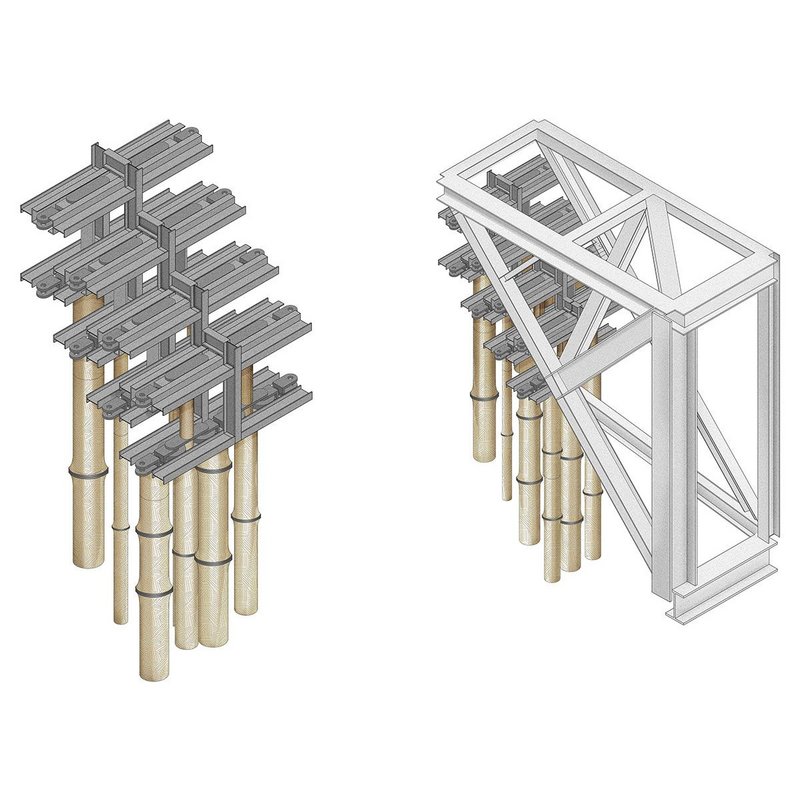 Detail showing how the track is supported by a steel structure off the main facade. Credit: Foster + Partners and Heatherwick Studio

Each layer of tassels has its own independent aluminium track fixed to two steel trusses extending from the concrete cores on the north and the south of the building. The 144m-long tracks are positioned behind two ribbons of bronzed metal cladding around the top of the building. These also conceal the motors – there are two per layer of veil, one of which is a reserve. Each tassel is a single extrusion of 4-5mm thick aluminium tube enclosed in a 0.4mm thick sheath of steel cladding. There are four to seven sheaths per tassel depending on length, with a rubber ‘bumper’, wider than the diameter of the tassels, where these sheaths meet. This deals with the joints and protects the tassles should they sway into their neighbour. Each layer of tassels is coated with titanium nitride to give a subtly different shade of bronze.

As well as varying in length to create the veil’s sweeping contours, the tassels are embossed in a pattern that becomes more diffuse higher up each tassel. This crafted element was inspired by ropes, knots and Chinese weaving. Each tassel terminates with a vitreous-enamelled steel cap in three variations of red. The tassels were installed in-situ over two weeks. Each was screwed into a threaded, aluminium alloy shaft connected to the track.