Despite the use of concrete and off-the-shelf glazing, Mole Architects’ latest sustainable house still sets the bar high

‘I kept trying to dissuade them from installing one, but the client was really insistent – we just had to make sure that it wasn’t one that leaked air.’ Mole Architects’ Meredith Bowles is talking about the woodburning stove in Stackyard House – the firm’s latest home – constructed for a retired couple to passive house principles in Palgrave, rural Suffolk. As designed there’s no need for it, but it’s more about warming hearts than bodies. ‘They’re both from old local farming families and have spent their lives rattling around rambling, draughty 17th century timber farmhouses with open fireplaces,’ he explains. ‘They thought they’d miss them, so it was to evoke a memory.’ There won’t be a lot else they’ll miss in downsizing from the old place. Here the couple has a modern and highly thermally efficient home and studio that’s also Lifetime Homes compliant.

While they didn’t know much about passive house principles, Bowles says they were certainly receptive to the ideas, interested in heliotropic buildings and green roofs as well as on-site power generation. They were also naturally at home with the use of timber. And while the design must have been an education for them, in some respects it was for Bowles too. Experience of living in his 2004 Manser Medal winning home, Black House, taught him that, though efficient, his timber home’s low thermal mass of meant that in summer heat built up internally. The blockwork walls he constructed in the house for his parents a little later took this into account and performed better. It turns out that Stackyard House, to some extent a product of its sloping site and the fact that it was constrained by an adjacent listed building, proves a hybrid of both these earlier houses.

Bowles explains that stacking floors is a general rule of passive house design: the more it spreads out, or the more external junctions there are, the harder it is to make the building work in terms of both cost and thermal efficiencies. The other driver was the north/south orientation, modified by the fact that the main views were afforded down the valley to the west. Unable to build above the apex line of the existing listed property, it was decided instead to burrow into the ground, Mole-like, to create two of the three bedrooms. The dig also involved building a reinforced concrete retaining wall connected to solid concrete floors on piles – providing valuable thermal mass in this otherwise lightweight structure. Bowles rues the day he cut the block walls and concrete floor of his own home for cost reasons – their additional weight meant unaffordable amounts of money being sunk into securing foundations in the Fens’ boggy peat. Here it’s like he’s laid his ghosts to rest, so much so that he wanted to carry the concrete, in its raw shuttered form, all the way up through the house. The idea proved too bold for the client, who settled in the end for plastered blockwork at the lower level.

Above this concrete base, the home is otherwise formed of lightweight, pre-fabricated timber panels. The frame was constructed by Swiss manufacturer Schoeb, which Mole used when executive architect on Jarmund Vigsnaes’ Dune House for Living Architecture. Described as ‘working from a small factory on a treed mountainside next to a saw mill’, the romantic notion is tempered by Bowles, who adds: ‘but they have an innate understanding of high insulation timber frame, with structures that are more weighty and solid that conventional modern timber systems here. Unlike cross-laminated timber, theirs seem to relate in feel and look to traditional English timber structures.’ It’s a concept that obviously resonated with the client – the firm was appointed without having to go to tender and subcontracted to work under the main contractor using the JCT Intermediate form of contract. Within the structural panels, 271mm of Ecotherm PIR insulation runs between internal batons. The firm had considered hemp systems like Warmcel but Bowles concedes: ‘To get performance you need thickness, and PIR just came through as thinner and cheaper for the same efficacy.’

On the roof the firm opted for a ‘warm’ flat roof, with 271mm simple rigid insulation system laid to falls with sedum on top. With the envelope performing well generally, the architect concedes that any compromises were made in the specification of the glazing, which was not Passivhaus certified . The triple-glazed units that they considered came in at over £10,000 more than the double-glazed Velfac windows the contractor sourced, an extra-over cost that even the architect couldn’t justify to the client. Here, and with the two large rooflights that do not meet the required air tightness criteria, the building falls short of Passivhaus principles. Bowles also concedes that it is difficult to make rooflight frames work thermally using standard components.

It might be one he just takes on the nose. With the MVHR system installed, solar thermal pre-heating working with ground source heat pumps to supply water to the under floor heating, and photovoltaics, the stats seem impressive. Of the 8000kWh used in its first year, around 4000-4500kWh can  be attributed to heating demand. Stackyard’s 17kWh/m2/year almost meets the Passive House goal of 15kWh/m2/year. In primary energy use terms it compares favourably with the 109kWh/m2/year goal, at ­120kWh/m2/year. The figures can also be read against the fact that the 8m2 of photovoltaics collectively produced 1500kWh of energy last year. Bowles is upbeat.

‘It isn’t certifiable as Passivhaus, but obviously, on balance, we’re doing pretty well,’ he says. So while it might not be the stuff of the German Institute’s dreams, Stackyard House still seems to stack up. 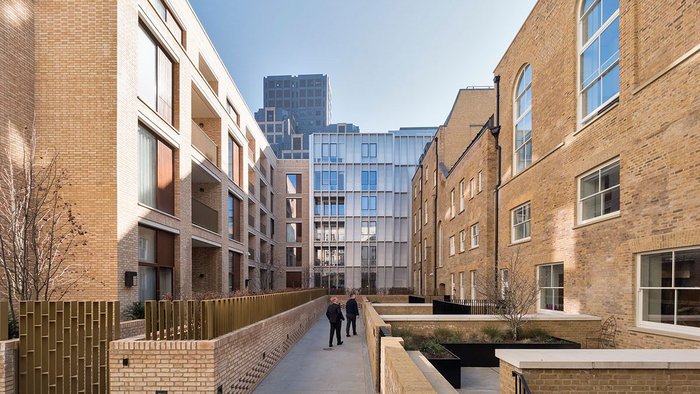