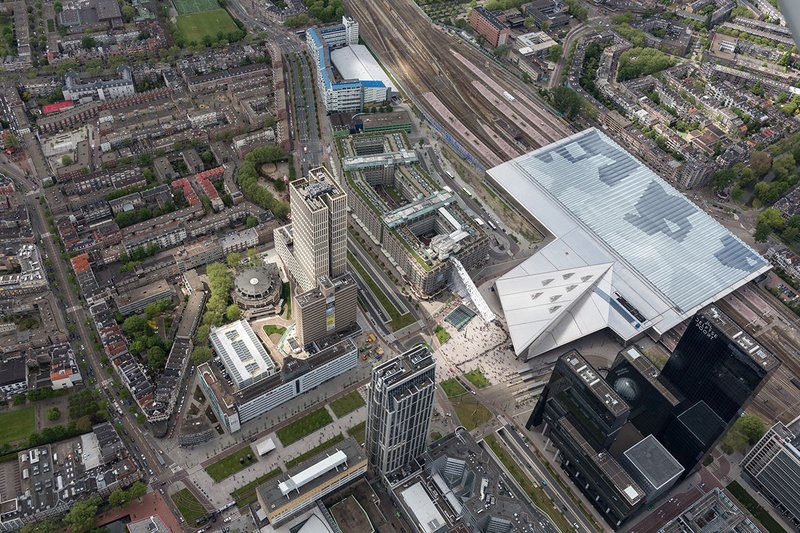 A giant 29m-high scaffolding staircase, rising from outside Rotterdam Central Station to the top of the historic Groot Handelsgebouw building, will give visitors a unique rooftop vantage point over the city until the middle of next month.

The 57m-long structure, known as The Stairs, was designed by local practice MVRDV and features 180 steps that narrow as they ascend towards a temporary observation deck on the roof, plus a venue for film screening and events.

The project is part of an event celebrating 75 years spent rebuilding the city since it was bombed during the World War II, and follows in the city’s tradition of erecting new monuments to commemorate reconstruction milestones, such as the Euromast, built in 1960.

Though temporary in appearance, and erected by a traditional scaffolding company, the structure is in fact weighed down with around

252 tonnes of concrete needed to increase its strength and rigidity.

The Stairs will support a maximum 300 people at a time during the event, but is strong enough to hold 1,000 people, said MVRDV.

Concealed concrete panels are attached to the scaffold and the entire structure is fixed to a concrete base plate, separated from the natural stone pavement by a layer of rubber.

Additional support was provided by fixing the scaffold into holes cut into the Groot Handelsgebouw office building. To minimise damage to the historic building - one of the first major buildings constructed after the bombing of Rotterdam in 1953 - just six holes were created that will be filled with cement matching the original building when the structure is dismantled.

Concerns that people might attempt to scale the scaffold at night, led to the installation of a transparent anti-climb fence on the sides of the structure.

Fedor Bron, project architect at MVRDV told RIBA Journal: “The fact The Stairs is only open for one month was, in part, a financial requirement due to the high cost to the Municipality of securing it, but it is also the main reason it has been so busy with visitors. We see the project as an important first step in creating a new network of rooftop spaces around the city. Many roofs in Rotterdam  are not currently in use but we should activate this ‘second layer’ by providing access via escalators or stairs from the street.”