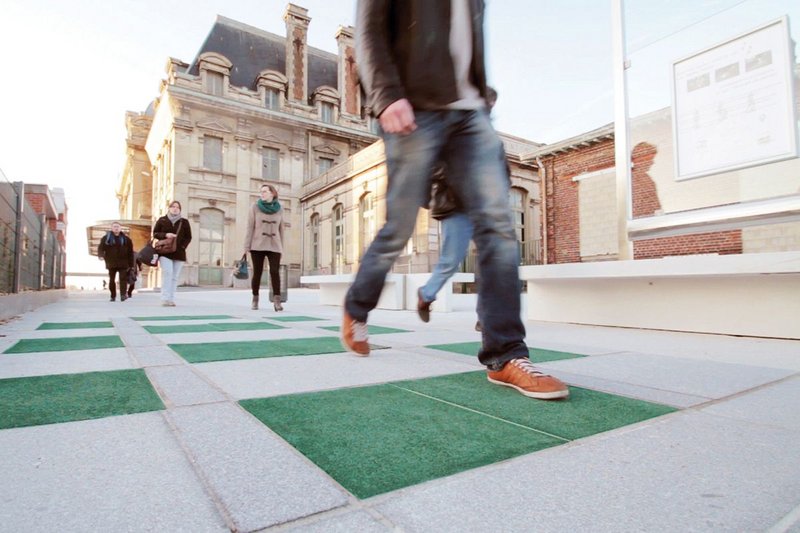 The prospect of using human footfall to power street lighting in cities worldwide came a step closer in March when tech start-up Pavegen announced it would be able to offer its smart street paving tile for under £600/m2 by the end of this year, in line with traditional high end paving.

Pavegen tiles generate about 7W of power from each footstep then store it in a battery for use in street lighting or other street-side applications. The firm attracted over £2.63 million of crowdfunding investment in 2015, through the clean technology funding website Crowdcube, which has been channelled into R&D to develop a cheaper, more efficient tile.

Laurence Kemball-Cook, entrepreneur and founder of Pavegen, says: ‘We now have clout with some of the biggest manufacturers in the world, making it possible to deliver volumes not possible two years ago. We aim to have our product retailing for sub-£600/m2 this year, where currently one square metre of granite floor at King’s Cross station costs around £1,000.’ Last year, the company costed its product at £1250/m2.

The improved tile, due to launch this summer, is expected to be more energy efficient than the previous version. It will offer increased data functionality for smart city applications, such as monitoring levels of foot traffic to help facilities managers better understand and manage properties, or enable property owners to raise advertising revenue based on footfall.

‘We have a data and energy proposition we are really excited about,’ says Kemball-Cook. ‘We can provide a granular look at how people move, which is really important for the smart city of the future... every footstep has a unique ID, link it to people’s smartphones (with their permission) and it gets really exciting because you can know who a person is, and where they are.’

Pavegen has already completed 100 projects in 30 countries and plans to have millions of tiles installed in every major city in the world within the next five years. The largest UK installation, at Heathrow, features 65 tiles across a corridor, used to power LED lights.

The first large scale implementation of solarised roads, capable of supplying up to five million people with electricity, was announced by the French government in January.

The Positive Energy programme will involve paving 1000km of carriageway with photo­voltaic panels over the next five years, enough to supply up to 8% of the French population, Ségolène Royal, France’s minister of ecology and energy, told a conference.

The 7mm thick panels are based on Wattway technology, developed over the past five years by Bouygues subsidiary Colas, in partnership with the French National Institute for Solar Energy, and will be glued directly on to the road surface. The panel’s cells are embedded into a multi-layer substrate and collect solar energy using a thin film of polycrystalline silicon. They are able to bear all types of vehicle traffic, including trucks, and resist skidding.

According to France’s Agency of Environ­ment and Energy Management, just four metres of solarised road is enough to supply one household’s electricity needs, apart from heating, and one kilometre will light a district of 5000 inhabitants.

Wattway has been described by Colas chairman and CEO Hervé Le Bouc as a building block for smart cities. It is seen as a first step in creating ‘intelligent roads’ that can monitor and manage traffic, gather maintenance information, carry out automatic diagnostic programmes or charge electric vehicles, perhaps using induction technology.

Tenders for the Positive Energy roll-out have already been issued and tests on the panels are expected to begin shortly. 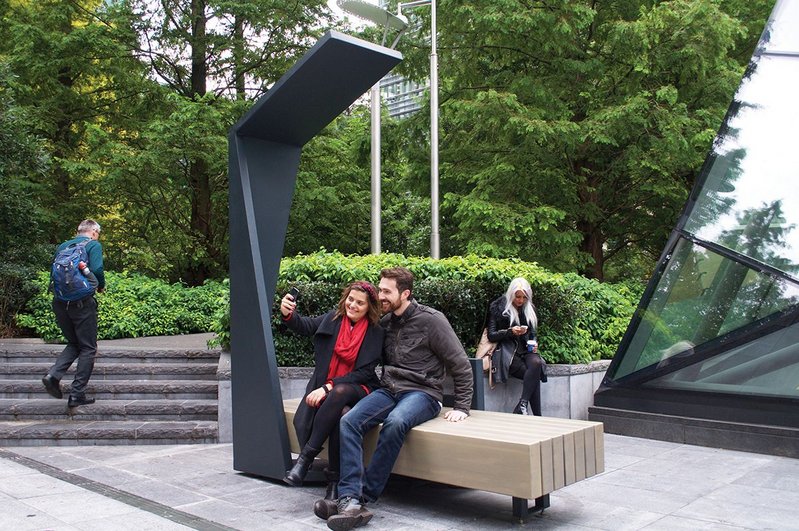 That mainstay of our streets, the humble public bench, will be offering far more than just a sit down if smart city start-up company Strawberry Energy has its way.

Its interactive solar-powered bench is able to charge a mobile phone, access the internet, relay sensor data on local noise and air quality to a central server, and even allow members of the public to call for help using an emergency button.

Installation of up to 13 more is planned across the capital and the south of England over the next six months, through deals with major real estate companies.

Milos Milisavljević, founder of the Belgrade-based firm, says: ‘We saw all the street furniture in cities that is quite obsolete and tried to work out how it could be reinvented to bring more value into everyone’s lives and be more responsive to the needs of modern generations. Benches seemed the most obvious choice because they are the most commonplace.’

The Strawberry bench is able to deliver about 200 ten-minute phone charges per day in London conditions. The new installations will look the same as those at Canary Wharf, but will also incorporate a set of plug and play connections to allow different sensors to be fitted, such as air quality sensors, or a people counter designed to measure local foot traffic.

A mobile app, for iPhone and Android, has been launched to enable users to locate the nearest bench when their phone battery is running low. They can also access environmental information on air temperature, air quality and noise levels at the bench.

One pole is all we need?

Metropolitan areas are cramped, making it impractical and expensive to roll out separate infrastructure for lighting, electric vehicle charging, CCTV, mobile phone masts, wi-fi and other features. Why not combine them all into the compact profile of a single streetlight?

Each LightMotion pole has two charging sockets at the base to enable car battery recharging direct from the street. A smartphone app guides drivers to electric vehicle charge locations and users swipe to pay for power using an RFID card reader.

The system is being marketed to local governments as plug and play, with all the smart city hardware in place ready to integrate with specific back office software. LoRa connectivity provides the long range low-power communications to enable the Internet of Things.

The concept was piloted on an installation of 185 streetlights in Rotterdam and further trials are planned at the Doll Living Lab smart city project in Copenhagen, and schemes in Los Angeles and Beijing.

Virgil Warnars, managing partner at LightMotion, says: ‘Cities know they want this type of integrated solution because it makes a lot of sense, but it is complicated because decision makers require an overall strategy combining totally separate functions, such as security, lighting and car charging. However, we are now at the tipping point and over the coming six months to a year these types of systems will move fully into the public sphere.’