Architect BIG went underground for its museum in the dunes, to satisfy the stringent requirements of a sensitive coastal site 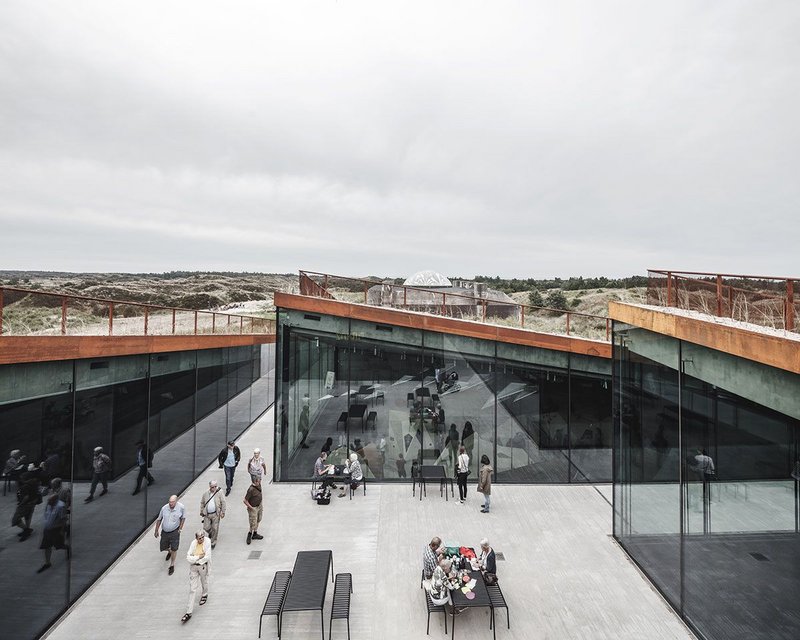 BIG’s subterranean Tirpitz museum in Jutland on the west coast of Denmark embraces a long local tradition of earth-sheltered structures.

‘Viking structures such as long houses were all under earthen roofs and dug half way into the ground. The roof provided insulation for the Scandinavian climate,’ says BIG partner Kai-Uwe Bergmann.

But while the extra insulation of the surrounding earth is expected to be highly beneficial for the gallery’s energy performance, that was not the key factor in the decision to build the 2800m² gallery largely underground. Instead, the move was an ingenious solution to the considerable constraints of building in a Unesco World Heritage Site.

BIG’s brief was to create a new museum at Blåvand at the site of a massive concrete bunker built in 1944 – though never operational – as part of Hitler’s Atlantic Wall defences. The new building, which replaces a smaller museum in the nearby town, was to house a collection of four distinct galleries showcasing the area’s Viking history, World War II history, Amber heritage and special temporary exhibits.

The challenge was how to create a new museum in the protected dune landscape – no new structures were allowed on the natural dunes, which left either the bunker itself or a nearby car park as the only site options. Fortunately, BIG found a third way with a smart piece of lateral thinking. Realising that the Germans would have excavated a large amount of dune to build the bunker, it was able to prove that this area was not natural – but made by the bunker builders 70 years ago. This enabled BIG to gain permission to embed a new building there, albeit one that was largely invisible. By covering the roof with dune sand, the museum appears as a continuation of the natural landscape.

And, says Bergmann, while there can be a conflict between what’s preserved and what’s created on such sensitive sites, this ‘stealth’ approach has enabled the museum to in bring year-round visitors with minimal impact on the protected landscape. Visitors only see the bunker ahead of them just before descending to the entrance of the museum down walkways through the heath. These read as four incisions cut deep into the dunes. They arrive in a central courtyard, around which are arranged four double-height, embedded rectangular galleries.

BIG cleared the sand from the site of the man-made dune before casting the concrete structure for the new museum. Each gallery is formed from a reinforced 300mm concrete base slab with two reinforced concrete, earth-retaining walls at right angles to each other. These support a post-tensioned concrete roof on two sides. This 950-tonne roof slab cantilevers out 15m in one direction and 30m in the other to enable a column-free main space as well as supporting the two other, fully-glazed, walls which admit indirect light into the gallery foyers. These triple-glazed elevations are hung off the cantilever and are designed with silicone butt joints for simplicity of appearance. This spirit of lightness and openness provides a sharp contrast, according to the architects, with the hermetic character of the bunker.

The cantilever is 1100mm thick at its connection with the insulated retaining wall and tapers to 350mm by the time it reaches the corner of the gallery in the courtyard. Above the concrete slab, the roof is topped with an insulated green roof system using sand and plant species appropriate to the surrounding vegetated dune landscape. At the base of the sloping gallery roofs the sand is deeper, and trays beneath it drain away any rainwater that filters through. Handrails at the edges of the roofs protect visitors who often walk there.

BIG’s extensive in-house research into getting enough natural light into the largely subterranean building, to help keep its relationship with its surroundings, involved running daylight simulations through the building model.

When visitors have progressed down from the courtyard entrance to the ground floor level, they can orientate themselves to all four galleries and to a new tunnel linking the gallery complex to the German bunker, which has been left largely untouched as an artefact.

As the building opened relatively recently, there is no year-round data on energy use available yet, but the architect expects the museum’s earth-insulated walls to retain heat in winter and provide a cooler environment in summer.

Visitor numbers are on course for a predicted 300,000 per year compared with 30,000 in the museum’s previous location.

Tirpitz is one of several BIG buildings that have been largely subterranean, most notably the Danish National Maritime Museum in Helsingør and a school sports hall at Hellerup.