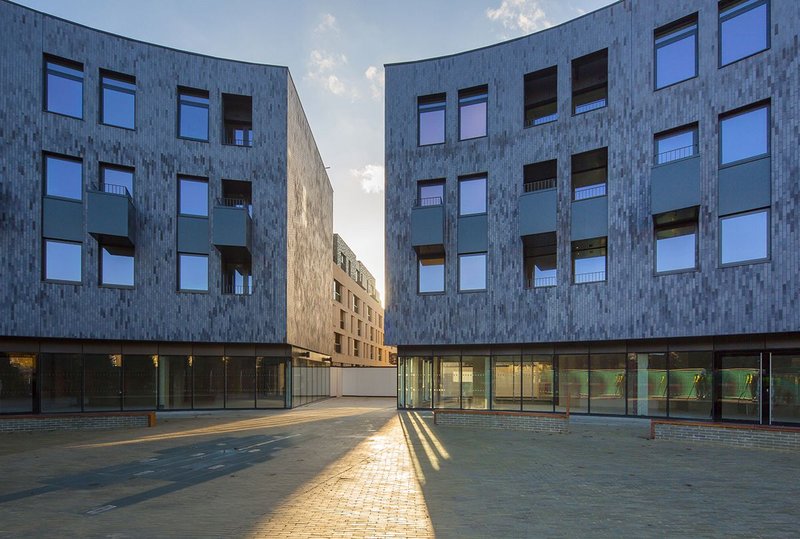 Pollard Thomas Edwards (PTE) has completed the first phase of the large mixed-use project Central Chelmsford using Wienerberger’s Corium cladding system supplied by Taylor Maxwell for Genesis Housing Association. Located on a 2.3 hectare-site just opposite the town’s main railway station, the phase is the first of two designed to revitalise and transform a prominent section of the city, formerly occupied by an Anglia Ruskin University campus which had lain derelict for many years.

With such an expansive regeneration site, the plan has been designed to be architecturally diverse and inventive, providing a variety of building forms set out within formal public spaces. Arriving by train, the new urban district is the first thing passengers see of the city. Designed at the crossing of key north-south and east-west pedestrian routes, the development creates important links between the station and Central Park to the south and the civic and arts districts to the east and west. The overall masterplan takes the idea of the public space as a series of rooms, each with a distinct character, purpose and intimacy. Within these spaces, PTE has refurbished three existing buildings, including the conversion of a grade II-listed former Quaker meeting house into commercial and retail units, to create context and a sense of place within the scheme.

The new development, which won the Innovative Use of Brick and Clay Products category at the 2015 BDA Brick Awards, brings new types of housing and jobs to the area. The finished phase consists of 219 mixed-tenure new homes including a 65-unit extra care supported housing facility, retail and commercial accommodation and the eastern regional headquarters for Genesis Housing Association. The majority of the housing is one and two-bedroom flats, but also includes ten three-bed mews houses.

Corium brick cladding, which is exclusively available through Taylor Maxwell in the UK, has been used throughout the development. Taylor Maxwell was brought on board early on to help the architect meet the client’s pressures on cost and speed of delivery.

‘We had been considering a number of materials,’ explains architect Justin Laskin for PTE. ‘But we were convinced by the glazed products available as part of the Corium system. Taylor Maxwell sent us lots of samples and worked hard to meet our requirements. We had about six meetings and visited the Birmingham showroom to finalise colour schemes and layouts.’

The scheme uses a mixture of Corium profiles. At the main public entrance to the site, a space nicknamed ‘the gate’, a curved iridescent grey glazed-brick facade acts as a funnel gathering together a number of converging pedestrian routes. Farther into the development, lower levels are a buff brick, while the upper levels have been constructed in a green-glazed reflective tile hung vertically. The material palette was chosen to create a solid grounding base at street level and a lighter and more playful upper level.

‘Taylor Maxwell were the only company able to create this particular aesthetic,’ Laskin continues. ‘Curves can be very tricky with brick slips.’

The second phase of the scheme is now on site and is expected to complete in 2018.