There’s a surprise self build at the end of the leafy lane – sleek black cladding reflecting the trees, tricking the eye as it slips in and out of view

Strange that a suburban house that’s covered in over 200m2 of black glass should be so difficult to find. But turn off a busy main road from Forest Hill station in south London and you’re on a street that’s palpably less urban. Turn again, down a track with a view framed on both sides and terminated by trees, and you feel you’ve left the city behind and are wandering down a country lane. When you reach the dense copse, look left again and the Tree House comes into view – or not, depending on the light. Its glazed walls run hard alongside the nearby trees, reflecting them; at times the house seems defined only by the timber reveals of its deep-set windows. At others its black mirror creates an uncanny and compelling Rorschach effect of its context, lost in the trees with its dark cloak of invisibility.
The home’s client, Kenneth Martin, is a lawyer – friendly, mildly eccentric and with a can-do attitude. He says he asked architect and family friend Ian McChesney to design the new house for him at the end of a large garden attached to a period property he had bought expressly for that reason. The story of the project is a rare one in that Martin’s reliance on working relationships was key. Some of  his sub-contractors for the build-out were employed, strangely for a lawyer, on no more than a gentleman’s agreement.
McChesney recalls that despite the site’s sensitivity, Lewisham planners made it clear at the pre-app meetings that if anything was going to be built, it would have to be a high quality exemplar with no recourse to pastiche, saying: ‘We were imagining something clean and sumptuous, with minimal detailing and no external guttering or copings’. Part of that aesthetic involved consideration of white glass cladding, but in the initial conversations with the client and planners, that turned to black. ‘It was not entirely original,’ concedes the architect. ‘We’d seen DSDHA’s Møller Centre in Cambridge and were influenced by its look.’ That academic building was itself probably influenced by Foster’s Willis Faber offices in Ipswich, but such cladding on a residential home feels shockingly new. So much so that when it went to planning, the then five-bed, Lifetime Homes, Code 4 house received 62 letters of objection from local residents but, with the architect ‘sitting sheepishly at the back of the room’, it was recommended for approval.

Its black mirror creates an uncanny and compelling Rorschach effect of its context, lost in the trees with its dark cloak of invisibility

The idea had a material clarity. ‘While the black glass was the overriding aesthetic, I wanted to celebrate the fact that it was a timber framed building and to expose all the surfaces internally,’ says McChesney. He contacted the likes of Eurban to discuss the viability of a frame and interior of pure spruce. ‘I wanted the wooden window frames in the facade to mediate between the glass exterior and solid timber interior,’ he adds. But perhaps it was the cost of this approach that alerted him to the fact that the planning submission would need to be robust, saying: ‘Ken never told me if he was going to build the home or sell the site on with permission – so we did a set of corner junctions and window reveal details and made them all part of the planning submission.’
Given the fact that, for financial reasons, the client opted to proceed with the build without his architect, it was an amazing parting gift by McChesney to the project, leaving him with a basic set of details, that, with the right sub-contractor team on board, could still deliver the project as drawn on a very strict budget. The lawyer assumed the project manager role with relish, saying: ‘It was like being a ringmaster – I just needed to cover myself by getting biggish companies involved with the major parts of the build – structure, cladding, pad foundations and glass – to make sure they worked together.’ Initially, Martin looked at bespoke cladding systems by specialist suppliers, but these were offering turnkey solutions that he didn’t want at prices well beyond his budget. The timber frame remained but he had to replace the homogeneous expressed solidity of the Eurban approach with a cheaper softwood stud framing system by supplier Scandia-Hus. The SIP panels between them were formed of 200mm rigid insulation to give it its Code 4 energy efficiency, with a plywood exterior face and Tyvek breather membrane. Two steel columns installed on the south facade as a sway frame gave required stability to the timber system. Internally, the softwood frame was dry lined and painted white, giving a clean finish, albeit at variance with McChesney’s original intent.

For the black glass cladding, after a lot of research, Martin opted for Kent firm Facade Concepts, which supplied and fitted the white glass walls in the Shard’s reception. It limited its works to fixing the support system and the glazed panels themselves, so came in at a much lower cost. Facade Concepts director Matthew Small, used to bigger projects, confesses being intrigued by self-build and the project piqued his interest. He was also intrigued by Martin – it seems he trusted him, agreeing to do the works with no contract to speak of, just a handshake and an understanding of agreed payment stages. He admits that it’s not something he’d normally do.
Facade Concepts sourced the 8mm black ceramic coated toughened glass from Germany, affecting lead times. It looked at self-cleaning coatings, but that had a significant cost implication. And despite the high level of panel to panel accuracy with virtually no deviation, yielding almost seamless reflections on the facade, the process turns out to have been very manual. Small cites logistics was the biggest single issue, with glass panels of up to 3.6m by 1.4m being manhandled onto site and installed by two men; at times, such as with the west elevation, they were standing on scaffolding no more than two boards thick.

Preparation was everything. Small needed to fit steel studs interstitially between the timber ones to help the SIPS panels take the load of the 450mm centres for the support grid. To this was fixed thermally insulated aluminium fixed point brackets and vertical cladding backing rails, plumb lined to ensure they took out any inaccuracies in the timber frame system. Clipped onto these were the ‘helping hand’ adjustable sliding brackets to which aluminium ‘L’ section rails were attached (‘T’ section at joints). With the support gridwork set true, it was then a matter of hanging the panels. These were glued on the vertical galvanised angles, acting as a guide, then aligned and set by hand with laser beams running along the facade. The fixing is notably adhesive rather then mechanical – Sika Panel was used as the final bond to the brackets, with tape allowing final adjustment before the adjacent glue fixing went off 2-4 hours later. Apart from being laser-aligned, the whole process was manual, involving, the client explains, ‘just standing back, looking at it and going “is that okay?”.’

The floor to ceiling glazed units at ground level, iroko-framed windows and west rooflight all had their share of problems – poorly specified silicon seals that reacted to full south light blew a couple of the units, and there are imperfections in the joints of the iroko frames, though this counterpoints the sleek glazing pleasingly and they are weathering in nicely. Most problematic was the rooflight. Formed of 70mm thick, 12mm triple glazed Saint Gobain Cool-Lite units weighing at 250kg each, their 70% cutting in solar gain doesn’t stop the first floor hall being uncomfortably hot at times, concedes Martin. The suggested solutions – high level vents addressing the butterfly roof’s box gutter and the proposal for timber brise soleil – involved going back to the planners, but with local feathers ruffled, Martin decided to do without either. Perhaps no bad thing. The counterpoint of the sheer glass and timber frames is part of the charm of the home, giving it a slightly Walter Segal-esque feel – a physical roughness standing out against a reflective facade that makes it almost invisible.
This isn’t just a story about ‘the house that wasn’t there’; it’s one that, despite a planning process fraught with objections, the absence of an architect after Stage D and a self-build by an inexperienced client, perhaps shouldn’t exist at all. The real story’s this: an architect whose design was robust enough to ensure the core design concept was carried through, despite post planning changes, and a cash-strapped client determined and obsessive enough to manage the job from start to finish with sub-contractors ostensibly employed to ‘de-risk’ the project – some purely on a trust basis. ‘I was lucky with all the people I got to work with on this,’ says Martin; and the result of the interaction is a handsome, sleek yet curiously hand-made black glass and timber home facing its copse. It could have been a dog’s dinner; instead it is wonderfully odd because it beat all the odds. 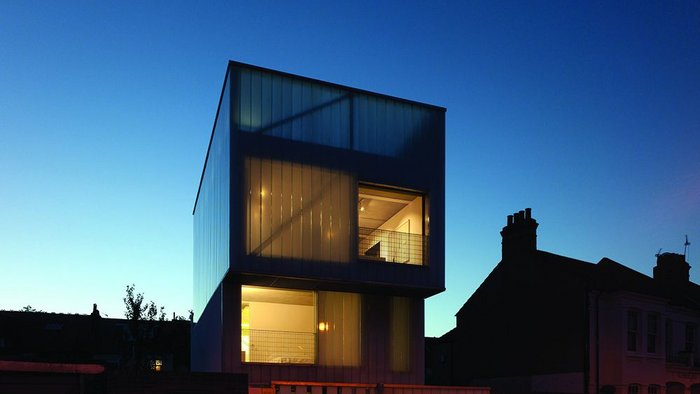 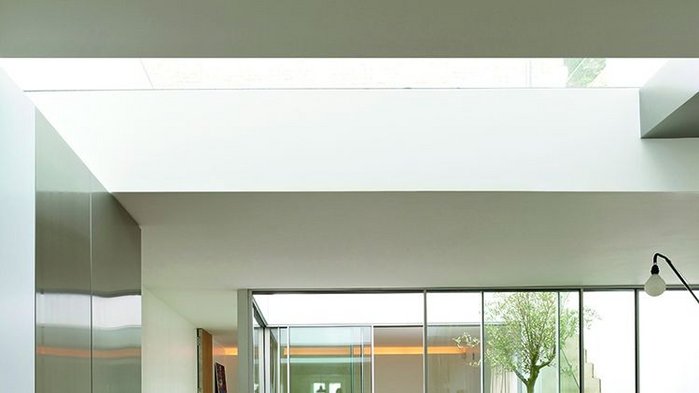 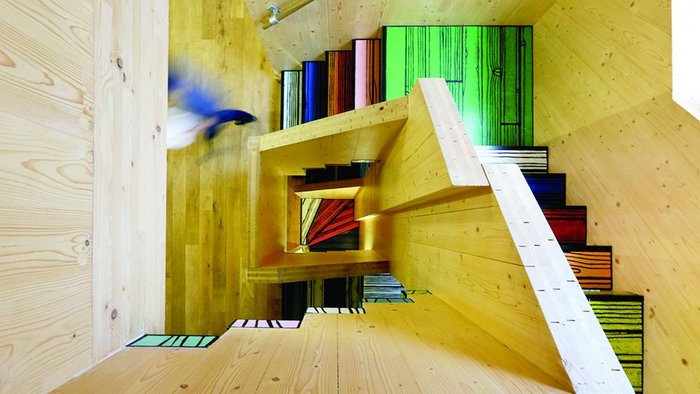