Farshid Moussavi’s design for the new shop in London is complex, beautifully detailed and, like fashion, all about the surface

Thankfully, it’s not often an architect makes it onto the Daily Mail website, but when the architect is designing the new store for Victoria Beckham on London’s achingly fashionable Dover St, the story was a shoo-in. Designer Farshid Moussavi won’t be drawn on why, from a shortlist of three firms, it was her practice that was appointed, although you sense some truth in the Mail’s assertion that with Moussavi regularly turning up on site in designer heels, VB might have seen in her a kindred spirit of glamour.

Moussavi’s intervention has completely reinterpreted the space behind the generous late Georgian facade onto Dover Street, and here it’s all about the staircase and triangular voids, which interestingly force you to move counter-intuitively through the space. Entering through a not totally satisfying concrete sliding door in a glass wall, you traverse a polished, poured concrete floor. But you are funnelled away from the grand concrete stairs ahead to a far corner, forced round by a cut in the slab to the basement below. You are led to a narrow space that extends to the full depth of the shop where you can access the stair, but this too effectively reduces in width as you ascend – interfered with as it rises by the first floor slab crossing its path, rendering it narrower at the higher level. The moves are confusing, but for such an ostensibly simple space, quite thrilling.

‘It’s an immersive experience, surrounding you and involving you in its complex inter-relation of spaces,’ says Moussavi on the phone to me from America. ’As you move through it, you are reflected and become the subject.’ You don’t say. The first floor slab soffit is reflected in highly polished stainless steel, as are walls and cabinets.

Expressed as abutting panels, invisibly fixed, reflections are almost continuous – it must have been a nightmare to achieve. Moussavi says this simplicity and attention to detail was part of the brand aesthetic, with: ‘no fuss, but meaning a lot more care’. Reflections are relieved by the changing rooms at the rear which are clad in a slightly unnerving and chromatic greenbottle hue.

The pièce de résistance is reserved for those ascending the staircase where the complex cross-hatched diagonals of an aluminium, concrete-clad fin ceiling are revealed. Formed of pre-fabricated sections, its drama is accentuated by the mirror stainless on the walls and columns which shifts the geometry in reflection, dematerialising them in the process. Stretching the full length of the shop, it apes the delicacy of fishnet stockings, but as if subjected to some gargantuan perverse haptic inversion. It seems like an awful lot of structure attributed to the perfunctory aim of ‘hiding the plant, acting as a lighting track and incorporating runs for the display of chain hangers for clothes’. You get the feeling it’s Moussavi’s favourite move in a space replete with contradictory interventions. And this is the ultimate illusion – a ceiling that’s decadent, outrageous, all substance but really only about surface. Vive la mode! 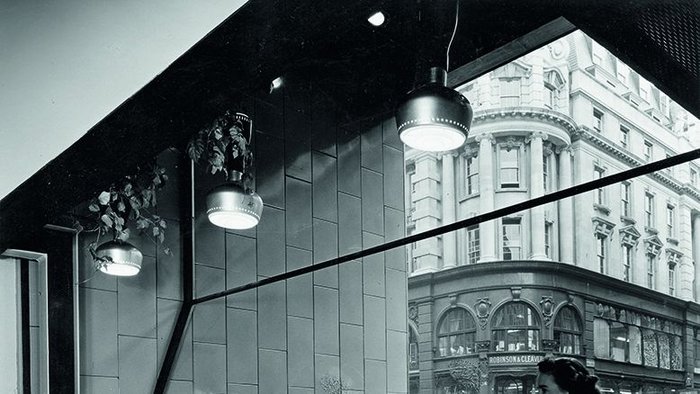 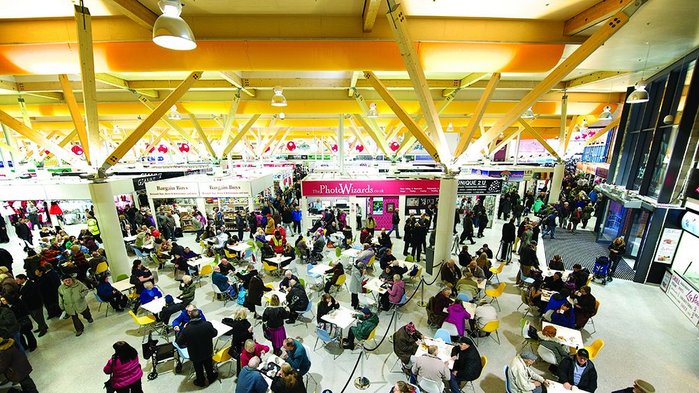 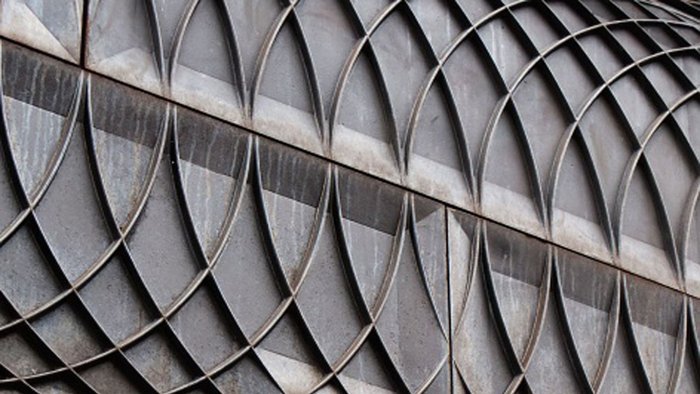 Paul Smith shopfront by 6a