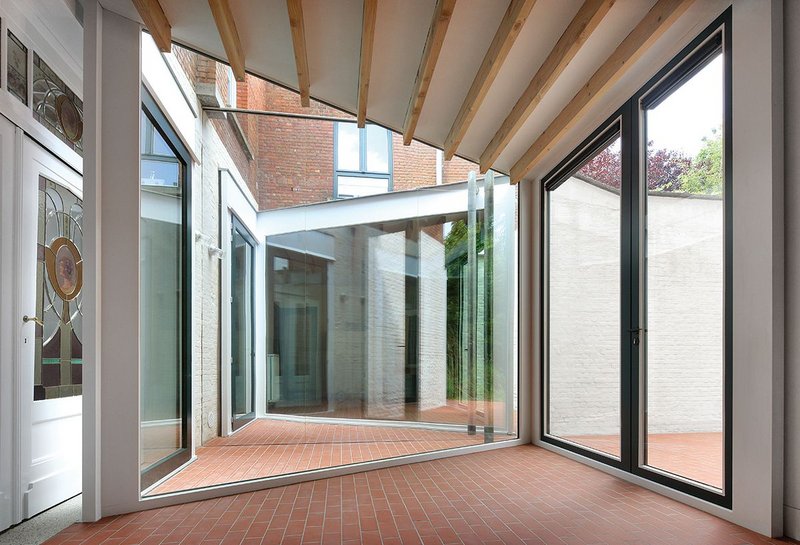 Looking west from the dining room out to the patio, the mirror wall creating the illusion of extended space. Credit: Filip Dujardin

Renovation or extension of urban terraced homes is common in Belgium. Usually, the main facade is unaffected, but the rear section might be altered to increase living space and user comfort and to allow more light to enter the interior. From the street, it might appear that there has been no change at all, but much may have altered within. The Vos House in Ekeren in the northern suburbs of Antwerp is a typical example of a 1930s vernacular terraced house with a 6m wide facade and 8.5m depth, yielding a 51m2 plan area. Behind the main building was a poorly built extension with a small bathroom and storage room above a veranda, kitchen and toilet at ground. The building orientation was unfavourable, the main south elevation facing a noisy street.

The client appointed Brussels practice Architecten de Vylder Vinck Taillieu to renovate the house and propose a new arrangement for the extension. aDVVT has adopted a dual strategy: on the one hand it respects the traditional values of the existing building and on the other offers a complex, contemporary and comfortable space in which to live. The large living room has been restored, with a wood-burning stove installed in the middle of the space. Beautiful original brown-painted timber stained glass bi-parting doors with overpanel that face the garden were retained and refurbished. Most importantly, new and much larger openings were made in the brick extension to open it out to the main house in new and surprising ways. Floor to ceiling glazing and doors, installed in a quirky Z-shaped form in plan, constitutes the renovation’s most shocking element. The arrangement has generated a small, triangular external patio, allowing the living room area to be easily ventilated by opening the windows. 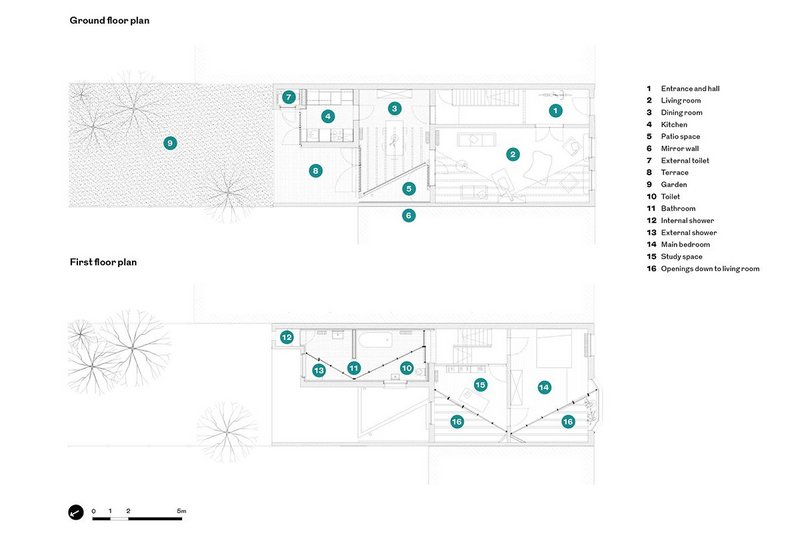 A mirror placed against the left exterior party wall intensifies the visual connection with the terrace and garden. Architect Victor Horta used mirrors in the interior of his Tassel House (1893) to visually expand the space and aDVVT itself has used them in many of its previous projects, such as the renovation of the Twiggy store in Ghent (RIBA Journal, January 2014). Here this creates a sense of uncanny displacement and a clear connection between the interior and garden. The angled glazing results in an illusory reflection when viewed from the interior of the dining room, which gives a sense of space expanding laterally.

To construct the new roof, wooden rafters were merely connected to the main external wall. A new double door in the dining room gives access to the terrace and garden – which has yet to be completed to the architects’ design. The compact kitchen was installed in the lower annex level north of the new dining room space. Because the bi-parting doors face out, a strong relationship is set up between this space and the garden, which is especially pleasant during the summer.

The position of the upper level bathroom in the rear extension was maintained but it has been subjected to radical reconfiguration. This new work has all been highlighted using bold, sharp red clay bricks, both internally and externally. In their simple expression, the space was also visually expanded. In this type of terraced house, bathrooms are often placed on the landing of the staircase between the ground and first floors, and a small storage room here was eliminated to create the bigger bathroom volume. The elongated space was divided into four discrete areas by using fine aluminium frames of the sort typically found in greenhouses. The use of mottled translucent glass provides privacy, but also lets the daylight enter the space. As on the ground floor, simple red bricks are used for floors and walls. The architect put mirrors between the windows and the wall covering to accentuate the small section of bricks.

The existing toilet was replaced with triangular showering area, complete with a window that has a lovely view onto the garden, and which can be thrown open to allow for ‘open air’ bathing.

The main bedroom is situated on the first floor, as well as a small study/office space. As a result of the client’s desire for more sunlight in the home’s central space, a section of this floor was removed, the timbers peeled away and its wooden joists revealed. South light now pours down through the first floor windows into the living area of the house.

In the two first floor rooms meanwhile, angled aluminium frames were installed along this cut line, as in the bathroom; except that here they are fitted with regular, clear glass, helping to frame the bedroom’s beautiful view of the town’s church tower. In the converted attic a new timber wall, articulated on one side so the client can use it as a bookshelf library, supports the ridge of the roof. A second, guest, bedroom occupies the other side of the attic, with small dormer windows bringing light into the roof void. Here, brick walls were simply plastered with fine render, and white- painted.

In this modest project, aDVVT has shown that altering an existing house can be both deliberate and controlled; conserving the soul and values of the existing structure and giving the additions autonomous and individual character. These architectural interventions don’t try to shout and the simple moves are not burdened with the weight of theory. The key principle has been to make the house more comfortable, so that its users can enjoy a better quality of life. For the architect, the challenge has been to create a highly specific atmosphere, merging the interior and exterior; all within the limits of the home’s original party walls. Careful, fastidious detailing of all the elements in this considered renovation comes across as this project’s main quality.

Marc Dubois is an architect and professor at the University of Leuven in Belgium.