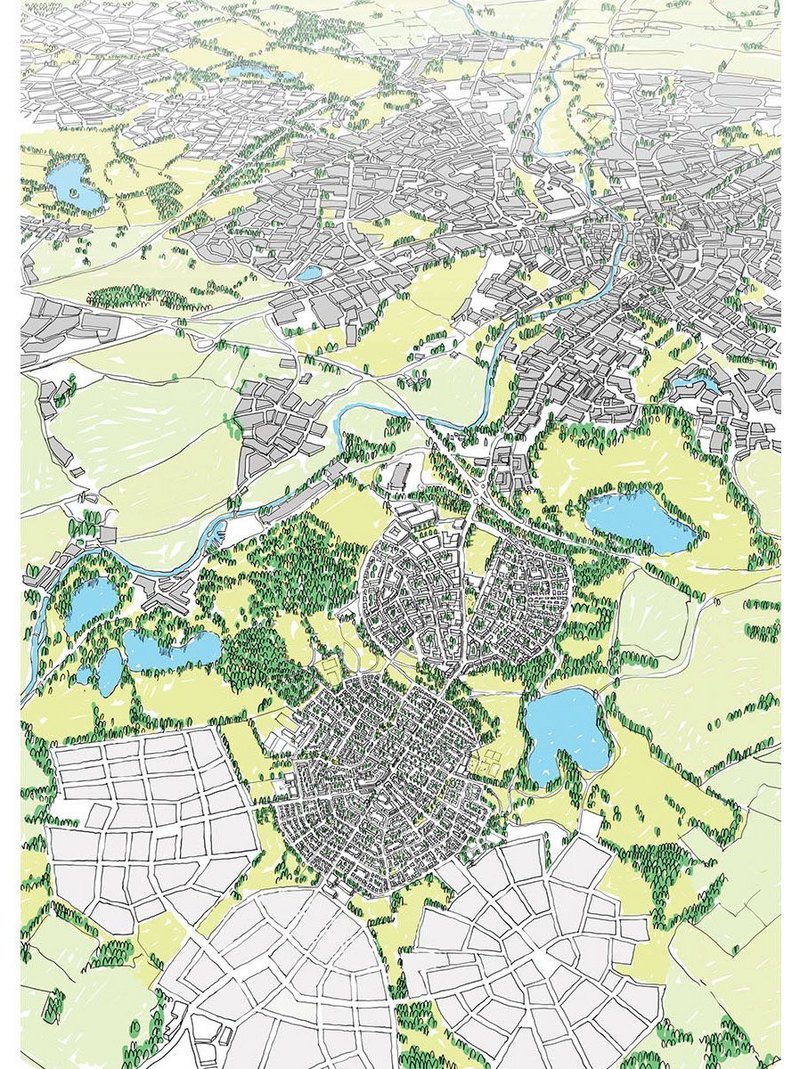 Aerial perspective of the fictional city of Uxcester.

At the start of 2014 I had no idea I would end the year with a picture of myself in the Oxford Times under the title Garden City Guru, but this is what comes from winning the Wolfson Economics Prize, which in 2014 had focussed on the role of garden cities in addressing the UK’s housing crisis. Until then I’d spent 20 years or more arguing for urban development, usually against advocates of garden cities. It is no wonder that fellow urbanists like Richard Rogers were ‘disappointed’ in me. He wasn’t the only one: planning minister Brandon Lewis put out a press release the day after the announcement saying our proposals were not government policy and wouldn’t be implemented. I wanted to reflect on the debate that has followed the prize and about the balance between town and country.
The reaction to our proposal is a symptom of a debate that has once more become polarised. For years the garden city lobby had argued for them as an alternative to real cities, saying people were voting with their feet by moving out to suburbs and that any policy that prevented them from doing so was an unreasonable intrusion on their civil liberties. Since we shouldn’t build on the green belt, which was what was exercising Brandon Lewis, we should instead build freestanding garden cities. Throughout most of the 20th century this argument won the day.
Then in the last decade of the century there was a fight back by the ‘New Jacobites’ – described by their critics as slavish followers of Jane Jacob’s ‘cult’ of urbanism. They believed cities had been losing population for decades and that there was plenty of scope to develop urban housing without risking town cramming.

Not enough homes
But from the mid 1990s the debate swung the way of the urbanists. First John Major’s Conservative government and then New Labour adopted targets for 60% of housing on brownfield land. Lord Rogers was asked to convene the Urban Task Force and within a few years we had an urban white paper, the Commission for Architecture and the Built Environment and a raft of pro-urban planning policies. By 2008 more than 80% of all new housing was being built within urban areas. The results can be seen in a remarkable revival of our cities.
The Urban Renaissance, as it came to be called, seemed for a while to be a new consensus. Models like the Urban Village in the UK and the Pedestrian Pocket in the US recast the utopian ideals of the garden city in an urban context and were supported by organisations like the Town & Country Planning Association. Cities were regenerated and the green belt safe – what’s not to like?
The problem was that we just weren’t building enough housing. We increased the amount of brownfield development but never found a way of supplying the 40% of homes that should have been built outside urban areas. This lies behind the current debate on garden cities. Some, like Richard Rogers, see it as an attempt to turn the clock back and believe that even talking of developing green fields will cause the housebuilding industry to lose interest in urban development. It is a view with which I have some sympathy. The last thing we want to do is restart urban sprawl.

Important ground
It was in this context that Urbed decided to submit an essay for the 2014 Wolfson prize, not because we were changing sides in the debate, but because we felt that, as urbanists, the ground was too important to cede to the garden city enthusiasts. We argued that we should reintroduce the target of 60% of all new housing to be built within urban areas and suggested many parts of the country have capacity to accommodate far more than this. However, many places suffer intense pressure for population growth but have precious little urban capacity. These are generally smaller historic cities and larger towns, like Oxford, York, Chester, Taunton and indeed Uxcester – the fictional city of our Wolfson essay. 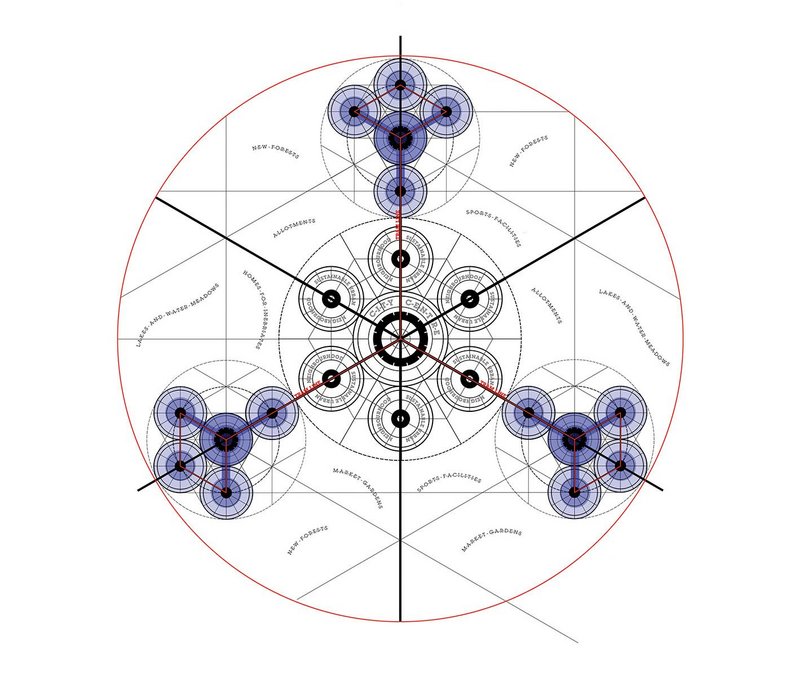 Over to economics
Some people in the countryside lobby will say that these cities are full, and that further growth should be diverted to places with the capacity to accommodate it. This of course is not the way economies work. If we stop these places from growing, housing becomes unaffordable (the Centre for Cities shows that housing in Oxford costs 15 times the average salary, in London housing is ‘only’ 10 times). This in turn affects the economy because employers can’t recruit, and creates congestion as people are forced to live in cheaper surrounding towns and commute in, while new housing is pushed beyond the green belt into less sustainable locations.
What then is the alternative? Well, all over the country the response of beleaguered planning authorities is to search desperately for fields around the edge of their settlements that can be allocated for housing without causing too much offence. The garden city lobby’s alternative is to build a new town, maybe a series of new towns, as a recent Policy Exchange report suggested. We believe that nibbling around the edge of the green belt is no way to create sustainable development, and that you can’t build free-standing garden cities from scratch in a field in the middle of nowhere. As a nation we tried that through the new towns movement and failed completely to create places that had the intensity, character and diversity of even a common-or-garden market town. 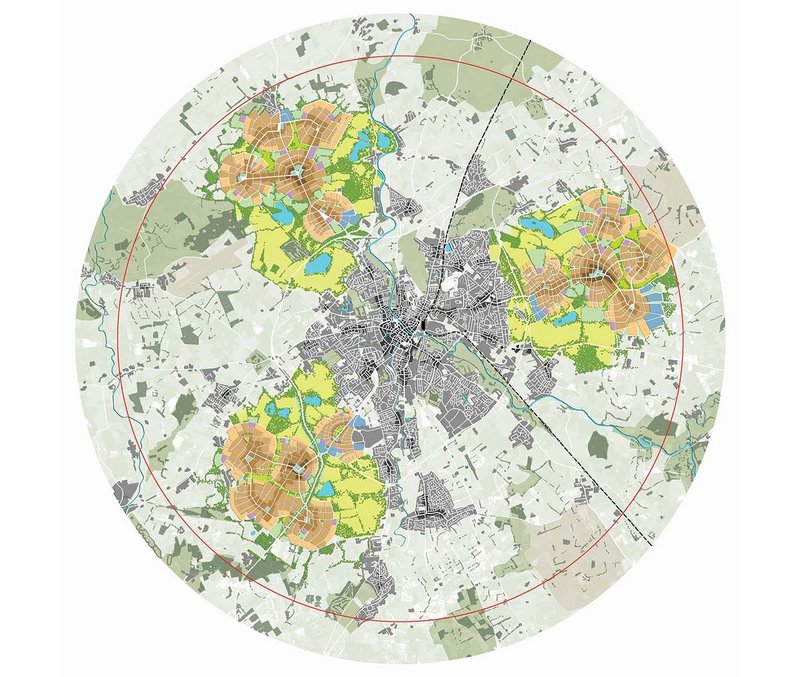 A confident bite
We should instead use the garden city principle to extend small cities like Uxcester by taking a confident bite out of its surrounding countryside. We calculated that cities like York and Oxford  could double in size by using only 5-7% of their green belt. These extensions should be large enough to provide a full range of facilities and services and to be linked back to their host city by a new tram system. In this way the garden city can be used to enhance and support existing cities in the spirit of Edinburgh New Town or indeed the original railway suburbs around London. Residents of the extensions will have access to all you expect in a city, railway station, hospital, university, theatre and of course city centre shops – none of which a new freestanding garden city could provide.
The problem for Brandon Lewis and many other politicians of all persuasions is that the ‘big confident bite’ that we are suggesting needs to be taken out of the blessed green belt. Once you have made all reasonable efforts to use urban capacity within towns and cities, the green belt is the next most sustainable place to build. Ruling out any development allows it to throttle successful cities, causing them to overheat, and pushes new development into unsustainable locations. We are not suggesting that the green belt be abolished – far from it – but we need to allow it to flex and adjust and to have the confidence to be able to extend successful cities in a way that enhances both the city and the countryside – as we did in the past. •
David Rudlin is manager at Manchester urbanism consultancy Urbed