South London practice Stolon Studio has completed several projects that it labels ‘sociable housing’. The first was Forest Mews, a grey brick development of three live/work houses, one of which was for practice directors Robert and Jessica Barker. You may have seen another, Kaolin Court, in the RIBA Awards shortlists last year with its rain chains and red clay tiled facades. The self-named building type has become a speciality for Stolon. Information about sociable housing is everywhere on its website, while over the past year its directors have been accumulating evidence to send to journalists about how successful the model has been during lockdown.

The key idea of ‘sociable housing’ is to create infill urban homes around a communal courtyard. The concept is not new, but the labelling is. Residents are supposed to chat to each other while sheltering under their front door canopies, have barbecues in the yard together or, as the firm has been keen to advertise, let their kids out at the same time, turning the central space into a private secure playground – a boon during home-schooling. The benefits from having like-minded, close neighbours is the pivotal point. It all sounds quite cosy and left-wing doesn’t it? It may be one step to the centre from co-housing. Or maybe you trip over the words and are somewhat led to assume it is some kind of social housing –  an easy mistake to make. 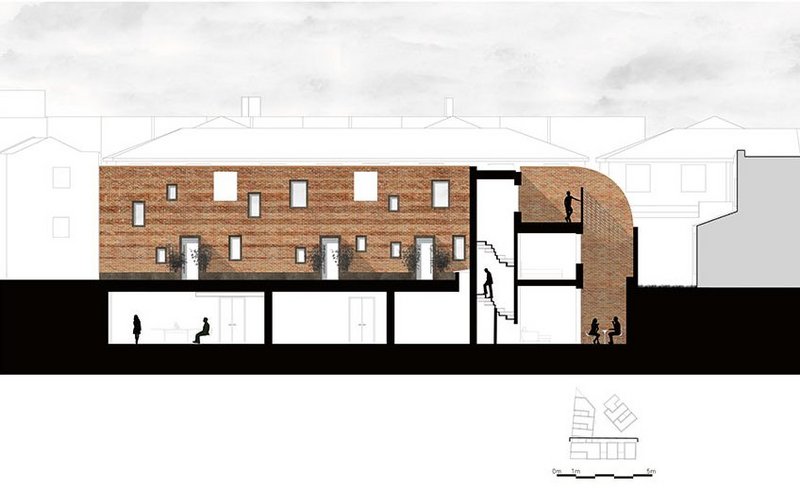 Imagine the surprise then, when you turn up at Stolon’s latest sociable housing scheme, Penrose Mews, just off Lillie Road in Fulham, to learn this is not a cosy development providing solutions to the housing and loneliness crisis one small perfectly formed affordable home at a time, but in fact, a high-end, lock-and-leave-able gated community occupied by, among others, a Championship footballer, a former CFO of a major furniture company and a couple who upgraded from living elsewhere. Armed with this knowledge, a differently tinted light shines across the scheme. But the first point, as you cross under the ‘gatehouse’ – one of two passageways from the street into the courtyard – and pass by the ubiquitous storage lockers and bike racks is that even the wealthy do not live well in London. Has Penrose Mews got me feeling sorry for a footballer?

Not too sorry. Penrose Mews is the brainchild of Crane Investments, a family firm, who meet me on site with architect Robert Barker. Crane bought the backland triangular site in 2013/4 for £2 million when it was occupied by design company Seymourpowell with workshops on the ground floor and offices above. The client then leased it back for a couple of years. Stolon had to find 900m2 of residential footprint to make the scheme work; it managed 975m2. The development creates nine homes: eight red brick terraces and a maisonette above the gateway. It is entirely rented and doesn’t include any affordable homes because it is below the ‘magic number’ that would trigger that requirement. The scheme cost £4,500/m2, which includes relocating an electricity substation, but is generous for housing. Koalin Court was £2,726/m2. The money at Penrose Mews – so named for its ‘impossibility in its purest form’ – is sunk into a vast basement that spans the site and makes the scheme possible by putting all living spaces into it, and into necessities and logistics like moving the substation and 37 party wall agreements. Not all developers would take this on.

Coming through the tunnel, we are dealing with a courtyard of charming small houses that cling to the plot perimeter. They butt to the boundary, tucking in behind a 1990s development of semis on one side; the four-storey rear of Lillie Road’s Victorian parade towers above another. The houses range in size from 109m² to 156m², but appear as two-up, two-downs. Immediately you would associate the architecture more with Peter Barber’s north London work. When I visit, the all-paved courtyard is empty except for a maintenance man milling about, but it is a Tuesday morning. The houses are defined by their entrance porches – extruded forward boxes, differently coloured inside, each with their own spotlight, one of the cutest features. Windows are scattered whimsically across the otherwise flat facades, some glazed, others open for roof terraces you can’t tell are there. The houses appear to blend; you couldn’t easily mark where one ends and another begins. Around the courtyard wall are ground-level rooflights with tall upstands that let light into the basements and act as a ‘defensible moat’, enhancing privacy in ground-floor bedrooms .

The formula inside is living space in the basement, kitchens under the communal courtyard, eking space out around the substation sited at the centre. Living spaces open on to at least one private circa 10m2 sunken lightwell courtyard. Each house is different, contorting to fit the site, although the overall footprint broadly follows the workshop buildings that were already there. The houses are three-bedroom, except the corner one which has 4.5. It’s also the only one without a roof terrace, though its basement courtyard is longer. Internal floor finishes include concrete-effect large-format tiles in the living spaces and timber engineered flooring that changes from natural finish in hall space to grey-washed in the bedrooms. Kitchens vary – some are charcoal grey with rose-tinted mirror splashbacks, others white-fronted. Bathrooms have quirky bulbous brick tiles.

Crane Investments has gone the extra mile on certain aspects, like ensuring ceiling heights of 3.1m in the basement and 2.5m upstairs. Roofs curve away from the communal courtyard, with fitted wardrobes and shower rooms squeezed into eaves. Specially glazed bricks on main elevations provide additional variation to the hit-and-miss bricks as well as enhancing reflectivity and lustre. The development is supplied by air source heat pumps strung up along the wall of the second access passage. A gantry crane is installed as part of the deal with UK Power Networks for the four-tonne substation machinery that gives a rawer industrial feel to one corner of the courtyard. The site is car-free, but Crane negotiated with the council for one on-street parking permit per house, which is increasingly unusual.

Unsurprisingly, more residents are international than usual, even in London – in spite of Brexit and coronavirus, which became worries during this long project. The client says people are attracted to live here because it creates a community. There are evident drawbacks to this too; although there are lightwells, views out of the windows are in on itself – to the courtyard or development walls. It’s a necessity because of how constricted the site is, but it’s a slightly claustrophobic compromise for high-end housing.

The client fully acknowledges the lack of views, and says you get privacy in its place, which you do from the street, but you are geographically and psychologically very close to your immediate neighbours – the courtyard leaves only circa 10m between houses in the corner of the triangle and there is overlooking that way. Problem is, while visiting, you can’t really shake the feeling that the price point doesn’t marry up with your architectural expectations. Even though the development is interesting architecturally, complex, a labour of love and worth the efforts in so many ways, the expenditure is not evident in the quality of life it provides. If London’s property boom continues, perhaps in a decade’s time it will.