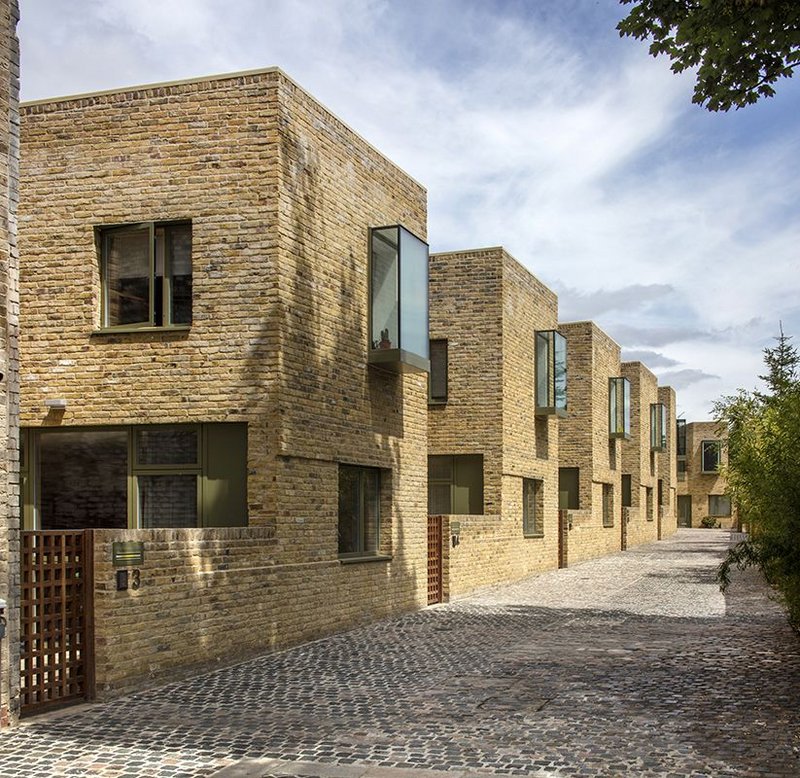 This little mews development is exactly what everyone is supposed to be encouraging. It takes a run-down alley in the Finsbury Park area of north London, and densifies the area in an intelligent and logical manner. It makes a terrace of private-rented homes that respects its context and its neighbours. The client is a solo small builder who appreciates good design and directly commissions his trades. It’s the kind of scheme – with limited access, concerned planners and multiple overlooking and party wall issues with watchful neighbours - that most conventional housebuilders reject as too much like hard work.  The occasional one-off house in such places is the more usual upshot. But these awkward sites are meat and drink to Peter Barber Architects.

Barber’s practice – with his co-director Phil Hamilton leading on this job – is known for its social and charitable housing and a more enlightened kind of estate regeneration, as at Colindale in further-north London. We profiled him and his practice in the first year of our MacEwen Award for his exceptional contribution to housing.  Moray Mews is a little unusual for the firm in being a wholly private development,  but it’s on the right kind of scale, and the way it came about was very old-school. The builder/developer, Roberto Caravona, had been knocked back by a planning refusal for an earlier scheme by other architects. Pondering what to do next, he found himself walking past the shop window of Barber’s studio in King’s Cross.  Intrigued by what he saw there, he went in and introduced himself.  And so started again from scratch, and the new Moray Mews came to be. 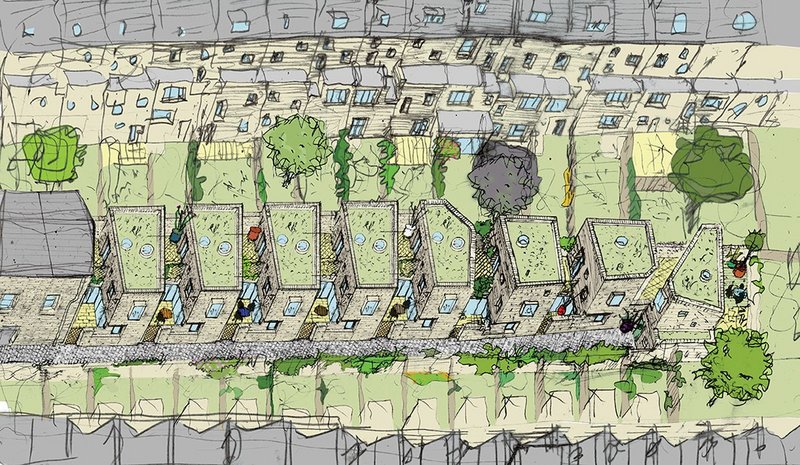 Barber’s bird’s eye axo of the scheme shows just how constrained the site is, hemmed in by neighbouring gardens.

I meet Barber there on a damp autumn morning, and by chance Caravona is there too, tidying up the end house which terminates the mews for a viewing by potential buyers/tenants. The sales market is very slow in London, he says, especially for bespoke homes hovering around the £1 million mark (just into a higher stamp duty band) which land and building costs suggest even here, in a poorer corner of north London than some. He owns this whole one-sided mews – buildings on the north side, garden walls of the next street on the south. He earlier made flats in a couple of retained buildings – former pub and workshop – at one end, and the Barber-designed development of eight houses continues on from these. Caravona wants to sell some of them to release capital for the next project. This is how small builders operate, and it’s not so different from the way the existing Victorian streets round here were built. But for now, they are all rented.

Some negotiation with planners and neighbours  took place during design:  in the event the houses in the eastern half of the mews, built on the former overgrown waste ground, were part-sunk into the ground and given sloping roofs towards their rear, intended to be planted. This was in acknowledgment of the fact that the neighbours at this point were used to seeing a jungle, not buildings, at the ends of their gardens, so the impact was minimised.

The end result looks somehow inevitable: a neat little row of brick houses with first-floor projecting glass bays very much in the Barber compact aesthetic, their little yards and terraces providing the space, light and ventilation needed. The alley is paved in reused granite setts (some were already here) and the garden walls running along the south side have been mended but kept as a masonry patchwork. The larger house at the end commands a view west down the mews. It’s a civilised little enclave and this new community is starting to personalise its various outdoor spaces with pot plants and the like, as Barber notes approvingly.

Inside the layouts are broadly similar if varying slightly in shape of floorplate: entry from the mews to a defensible outdoor space ( at street level or sunken) via some fine chunky wooden gates, big living/dining area, one bedroom downstairs and two upstairs, a variety of glimpsed views deftly achieved without overlooking. The boss house at the end has a good delicate folded-steel-and-oak staircase descending through the space exactly to the architects’ designs, and opens up at the rear to a conventional ground-level garden. Upstairs in the sloping-roofed types, the pitch is a bit startling, the roof coming down very low at one end of one upstairs bedroom I saw.

It is all very well finished inside in the manner familiar to us from the ‘contemporary living’ lookbook beloved of upmarket estate agents: nothing to frighten the horses here but nicely done. The achievement of this little development is not in radical interiors, rather in the fact that it got built at all and successfully handles daylight, open space and privacy issues on very compact plans. It is all just about as tight as it is possible to be, to the extent that vehicles are seldom allowed along the alley, but the overall feeling is one of congeniality. In its modest way, it’s an exemplar in how to insert good new housing into existing streetscapes.