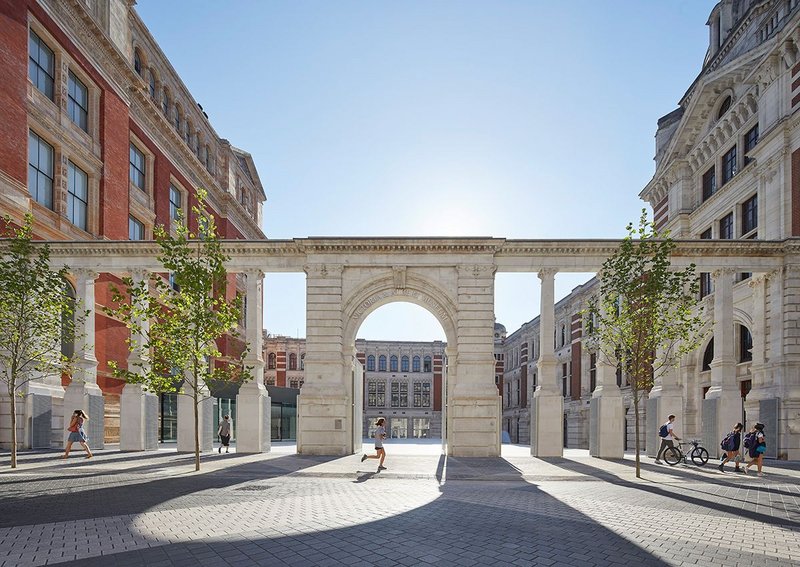 You have to understand this project not so much as a building – though a great deal of intense architecture and engineering is involved, and a large volume of useful and beautiful space made – but as the start of a gradual reorientation of London’s enormous, venerable, steadily evolving Victoria and Albert Museum. The imposing south-facing Aston Webb main entrance, aloofly turned away from the other South Kensington museums, has now been joined by a western entrance and courtyard off Exhibition Road, penetrating Webb’s colonnaded screen to what was the boilerhouse yard, leading to an enormous new underground gallery. The knock-on implications of all this for the rest of the museum will resound for years.

Those with medium-term memories will recall that the work of Amanda Levete’s AL_A here is in the place where a much more assertive edifice was previously proposed, namely Daniel Libeskind’s ‘Spiral’ extension of 1996 which managed to miss the Millennial Lottery-funded cultural-building bonanza of the turn of the century and was eventually dropped in 2004. Those with longer-term memories may even remember the ‘Boilerhouse Project’ contemporary design gallery of 1982-87, a Habitat-like, white-tiled space inserted into the existing basement here by the Conran Foundation, with the young Stephen Bayley in charge. That eventually morphed into the Design Museum, first in Bermondsey, now in the former Commonwealth Institute not so far away from the V&A in Holland Park.

Those as-found basement spaces were always claustrophobic, while Libeskind’s tumbling-stack-of-boxes offering, though cleverly linking the various levels of the museum wings to either side, would have offered several more smaller galleries, the purpose of which was somewhat unclear in this sprawlingly labyrinthine museum. But clearly, this was a place where something would eventually get built. The museum undertook a rethink, taking the form of a 2010 study by Ellen van Loon of OMA as part of the ongoing 'Future Plan' project, and came to a rather more radical if less intrusive conclusion: that what was needed was nothing less than a very large new gallery indeed for temporary exhibitions, of the same size as the present exhibition galleries in the North and South Courts combined. And that the best way to achieve that was to dig down rather than build up. That way you would get both a new public space on the surface and a new gallery and back-of-house facilities underneath.

AL_A won the resulting competition with a design that plays on the museum’s long history of glazed ceramic tiles. Levete’s hand-made Dutch tiles, cream and ridged with a pinstripe colour inlay, floor the new Sackler Courtyard (she sees it as a field, with some of the tiles coloured to suggest flowers) which is also the roof to the gallery below. Plainer tiles rather crudely clad the above-ground buildings (café and museum shop, principally) which hug the north side of the new courtyard and swerve round behind the Henry Cole Wing.

You enter this highly sculptural courtyard through the rebuilt Webb screen, now expressed as a pure colonnade with frameless perforated cast-aluminium gates performing the role of the now-vanished wall here. Not altogether successfully since, though these are solid, we tend to associate perforated aluminium with stamped-out flimsiness and impermanence, and it’s hard to get away from that, even though these gates also carry ghostly imagery such as the royal coat of arms.

You then have a choice: continue on the slightly rising courtyard to the top of a broad sweep of steps leading down to the new museum entrance (rising in order that rainwater runs away from the museum rather than pouring down the steps towards it) or take a gently sloping ramp peeling away down on the right-hand side. The courtyard and the ramp are separated by the ‘Oculus’, a long skylight surrounded by a stout stainless steel upstand that in normal conditions provides a view of the structure of the gallery roof below (for the opening it was obscured by an LCD art installation). Levete would have no truck with glass that you can walk on: in her view, and probably most people’s, this is unsettling.

From the bottom of ramp or steps you enter the museum through other newly made piercings in the facade, to the Blavatnik entrance hall carved out of the western wing of the museum. Ahead of you, you see the museum’s central courtyard through the windows but you cannot get to it from this point: you have to go to left or right. If left, then you find the staircase descending to the new Sainsbury Gallery below.

This is a fine, fluid staircase, lined in matt and polished black-lacquered tulipwood, its inset handrails making what looks like the world’s longest marble run to the bottom. It takes you past the bundle of exposed red-painted steels that are holding up the masonry wall of the museum above – part of Levete’s strategy, realised with engineer Arup, of revealing the structural workings of her building. There is a lift as well, of course, and a second stair for the return leg – debouching in the shop. This return stair starts rather awkwardly in a corner and is not obvious when you emerge from the gallery. Perhaps when circulation routes are defined for exhibitions, this will become clearer: for the opening the gallery was left open and, apart from a long curving aluminium bench by artist Jonathan Olivares, empty but for various performances and sound and light installations. 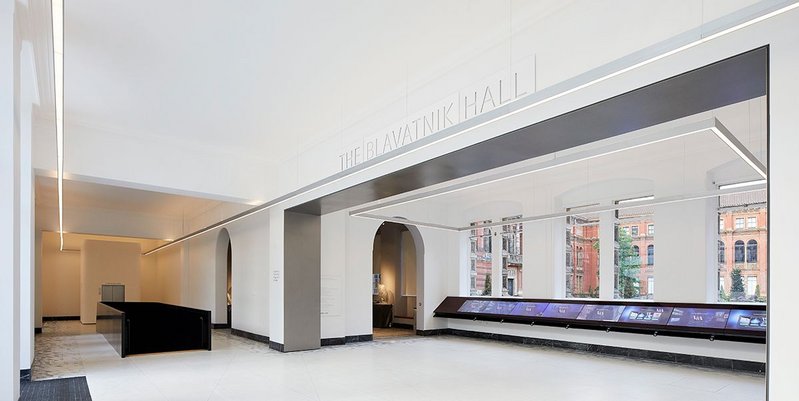 The Blavatnik Hall provides a new entrance to the museum, carved out of the existing structure. Credit: Hufton+Crow

This is good because it is not often that one gets to see such a huge clear space (38m x 30m) empty. Looking up, you see a geometric folded-plate roof but this is not quite the nature of the structure beneath, which takes the form of 14 triangular-section steel trusses, jointly weighing 256 tonnes. The roof tilts to take up the level change between Exhibition Road and the museum entrance, and rises to 10.5m. But the hole that was dug went down 18m, because beneath your feet in the gallery is another level of conservation studios and exhibition preparation. The programme here is quite similar to that at Rogers Stirk Harbour + Partners’ World Conservation and Exhibitions Centre at the British Museum – another iceberg building sunk in a similarly deep hole, though one with more above-ground street presence if no public realm aspect. 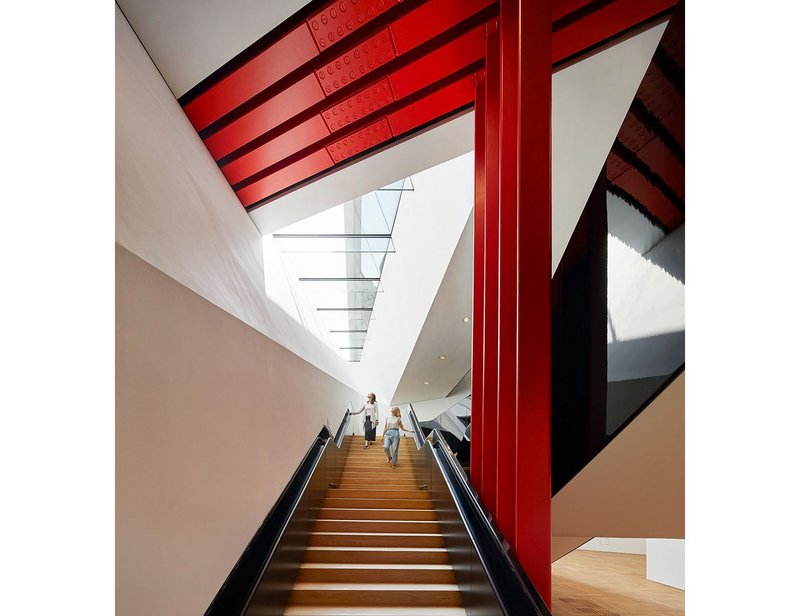 The staircase passes below exposed red-painted steels that are holding up the wall of the old museum above. Credit: Hufton+Crow

The gallery floor is oak, the walls grey. It does feel appropriate for the V&A, though how often exhibition designers will want to use the daylight offered along one side is moot, as Levete admits. It’s there if they want it. This underground organism does have above-ground fruiting bodies, however – the L-shaped structure containing the café and the shop, expressed as linked pavilions with an undulating tiled roof. There’s terrazzo and mosaic and also the odd touch of welcome mischief: Levete made sure that male and female lavatories are both finished in the same baby-pink, for instance.

You can pick away at the detailing if you wish: some junctions are awkward, the pavilion roof tiling is distinctly clumsy in places, and so on. Some may well take exception to the incisions made in the historic structure to make this all work, but by and large it’s pretty good. One of the great things about it is the new views opened up – notably of the previously unseen sgraffito- (scratchwork) covered facade of the rear of the Henry Cole Wing, and of the ponderous but interesting early 20th century neoclassical facade of the Geological Museum (part of the Natural History Museum) opposite.

On a bright day – not even a sunny one – you feel you need sunglasses to handle all the light being reflected off the tiling beneath your feet in the courtyard. You also realise – as do the museum authorities – that the whole complex now needs to adjust itself to accommodate the new arrival. The existing pedestrian tunnel entering from the subway to the west bypasses the new section completely, for instance, and while you can get to any part of the museum from the new place, you find yourself wanting a door out into the central courtyard to make an enfilade of public spaces.

So: we now need to test the new place with the first blockbuster exhibition, and we look forward to the strip-out of the old North and South Courts that will now take place, revealing, we are promised, marvellous long-concealed Victorian spaces. Meanwhile, AL_A’s expensive surgical intervention into the fabric of the museum has finally completed one of the longest bits of unfinished business of any British cultural institution and provided a smart-casual west entrance to balance the very formal south one. Now it’s for the public to decide which it prefers. As for me, I’m impressed by the interiors but I don’t yet love the exteriors. They seem just a bit too effortful. I want to see how they will age.