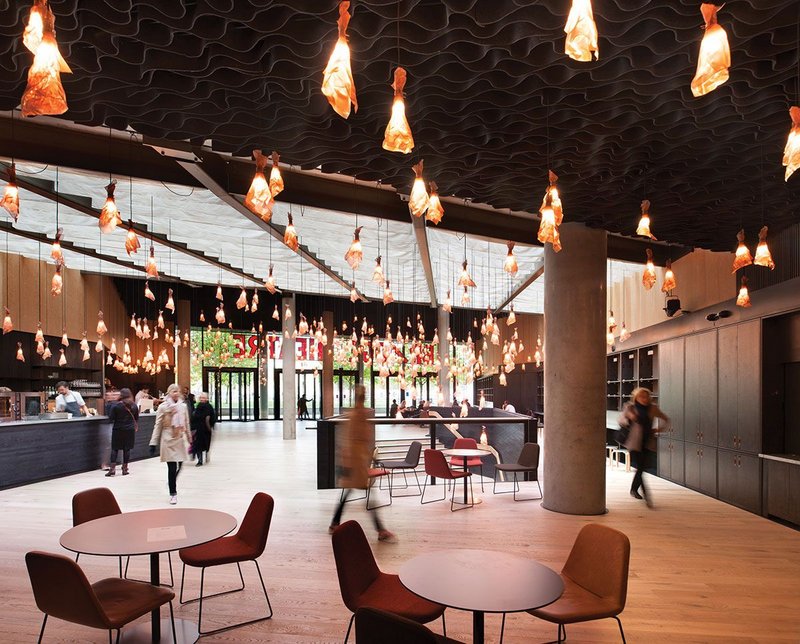 The foyer is light during the day, the layout avoiding pinch points for when the theatre is at its busiest. Credit: Philip Vile

Most modern theatres have quite a presence. They are often civic buildings and their form and massing will speak of the programme with a fly tower reaching up and clues to the rake of the auditorium on the street frontage. Haworth Tompkins has worked on a few of those, but has also proved it doesn’t rely on external appearance to make a great theatre. It can make theatricality come from within – the convivial entrances, bars and cafés, the focused, unfussy auditoria.

But still, sliding past the shiny limestone of More London, high end offices and superluxe flats, I wondered at One Tower Bridge how embedding a theatre into all this would work. Because it really is embedded. It fills the hole that on many blocks of flats would be ‘activated’ by a supermarket. The signage recognises this, spelling out the theatre’s name in glowing letters. Next to Tower Bridge, facing a plaza onto the River Thames and Foster’s Greater London Authority headquarters, this position now reeks of money, though it may be a thin, riverine skin on the deprivation elsewhere in Southwark. 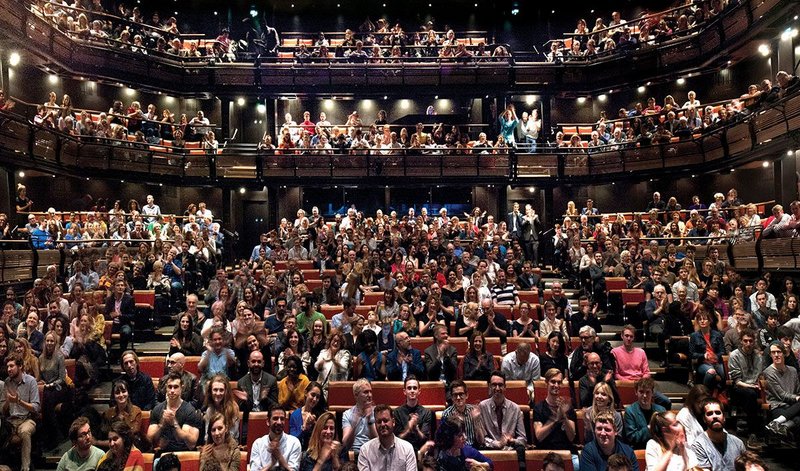 Awaiting the play: the auditorium arranged in end on configuration for the opening play Young Marx. But there is still no proscenium arch. Credit: Philip Vile

But let’s get inside. Steve Tompkins is ­already settled, glass of red in hand, when I arrive. He is at home here. The creative forces behind the theatre were long standing collaborators with Haworth Tompkins: Nick Starr from the Almeida Theatre’s takeover of Gainsborough Studios in 2000 and both Starr and Nick Hytner at the National Theatre. With a track record at the National for creating commercially successful productions, the pair had plans for a new commercial theatre without subsidy. Tompkins explains that he was already doing a theoretical research project with ‘Nicks’, as he calls them, into the intangible, intimate qualities and flexibility of a small theatre like the Young Vic, when they decided to bid for the space reserved for ‘cultural use’ at One Tower Bridge. Haworth Tompkins had come up with a plan for shallow galleries lining the room. At 10m deep the sunken main space could just accommodate this, with enough seats to support a commercial formula. 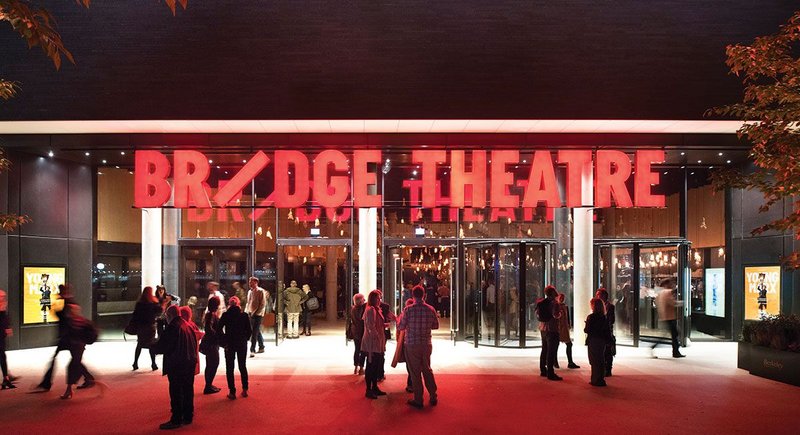 The hubbub around us is building as people arrive for the evening’s performance of Julius Caesar. Tompkins’ concern was ensuring this space was not too big: ‘It will be rammed,’ he promises. The wide glass frontage and unclad concrete columns still need the ‘glamour and lustre’ that theatre deserves. So the cabinets of Douglas fir ply that line the walls like an empty library gleam with reflective paint. And the fabric language has a costume drama of its own. The huge rooflight is lightly baffled with fabric, elsewhere stiff folds of felt create a warm sense of enclosure. Hanging bulbs are dressed in skirts of copper mesh. The dark timber stair has the simplest light oak wreathed handrail – each joint section the same perfectly judged dimensions as it flows down to the dark lobby and seats. 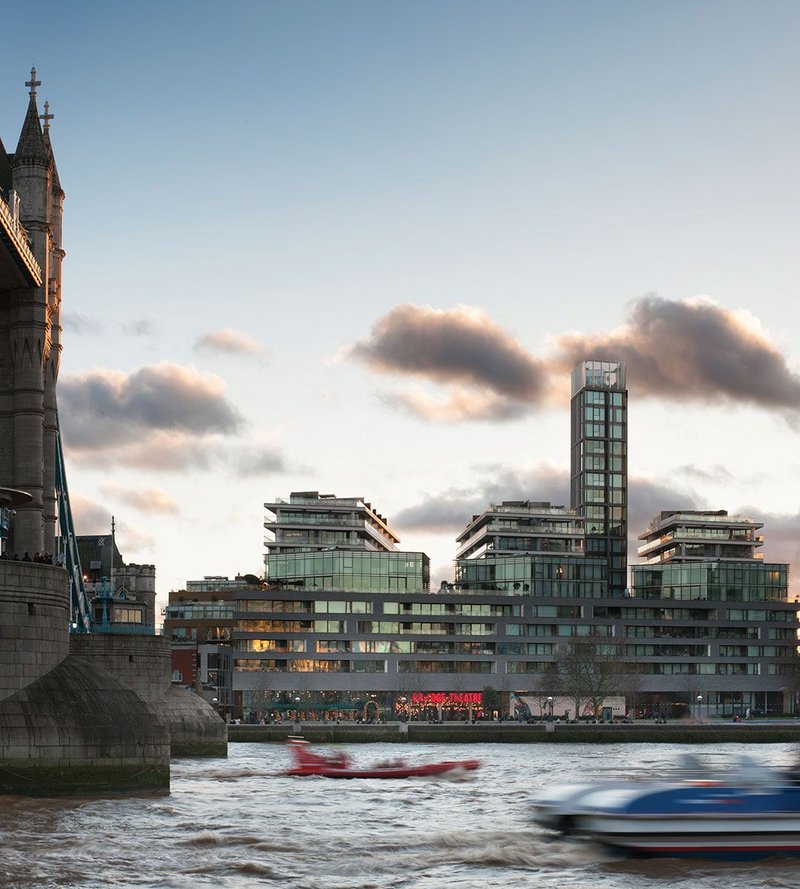 From across the River Thames the theatre lights can just be seen at the base of One Tower Bridge. Credit: Philip Vile

Questions in the theatre press about locating a commercial theatre off the West End seem irrelevant in this buzzy context. Certainly the West End, with its historic theatres crammed into busy streets, offers nothing like the design freedom of this theatre. And with the programme of productions specially designed for the space (rather than receiving productions from elsewhere) the lack of fly tower shouldn’t cause problems. Here the auditorium works comfortably in three basic configurations, thrust, end on and in the round.  For Shakespeare’s Julius Caesar the set design closed up the circle of galleries, and a crowd from the audience standing in the centre became part of the highly charged action as characters strode on and off, the stage itself shifting shapes as it lifted and lowered.

This sort of stage engineering is integral not just to the performance but also to the auditorium itself. With tight time on a 15 year lease, tight space with just 20mm tolerance on the 10m high space and the potential for it all to go wrong at the last minute with a clash of house and theatre electrics, Haworth Tompkins and the theatre went for rock show technology. Tait Stage Technologies took over the auditorium build after shell and core (‘there are stretch marks there,’ admits Haworth). The architect drew up a very detailed CAD model – sitting in every seat digitally along the way and calibrating knee and toe room. From this Stage Technologies built the steel walled box-in-a-box to go on top of the floating slab. It was wired, with built-in air handling through the walls and CNC-cut balustrades to the galleries. It was brought to site in lorry-sized chunks. Each module was split mid column so each was self supporting as it went in. It was a revelation to Tompkins. ‘They were used to machine tolerances, not building tolerances.’ Not only that but architects Tompkins and Roger Watts drew instinctively, relying on their university engineering training. From that Stage Technologies calculated everything to ensure ­ efficiency, with resulting very slim steel cantilevers on the galleries.

Coming out to the majesty of Tower Bridge I realise that the presence of the Bridge Theatre will, like the best theatres, be in the minds of those who come to a show here. And more than that, the ebb and flow of those people and how they redraw the sometimes soulless public space with their visits might feed into the huge southern tracts of Southwark. And if the Bridge elevates the typical position of a supermarket then all the better.

York puts on an encore