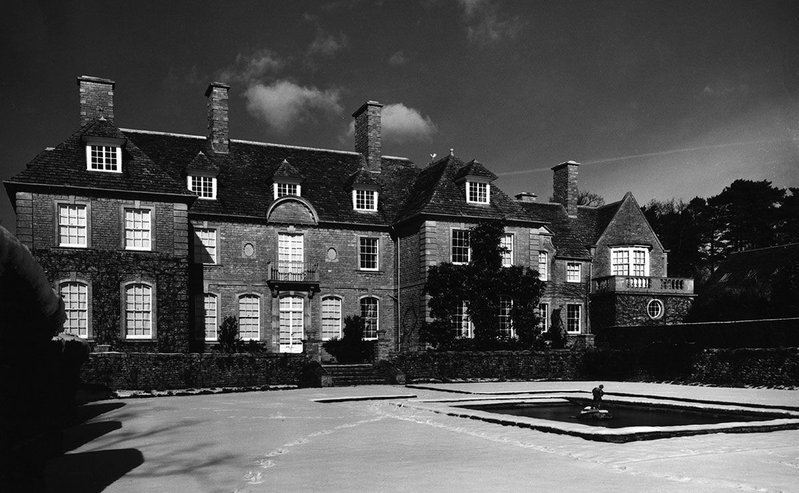 ‘Most essentially English,’ is how Guy Dawber (1861-1938) was remembered after his death by The Architect and Building News. His country houses could be found in many corners of England in Surrey, Woodford, Cheshire and Norfolk (where he was born). But most were in the Cotswolds, where he spent early years as an architect sketching the soft stoned buildings that grew out of that landscape before other arts and crafts pioneers such as William Morris discovered the area.

On the southern edge of the Cotswolds, near Bradford-on-Avon, sits one of the houses that repaid all that study. Conkwell Grange claims history with a 17th century style, although it was completed in 1907. It sits above a steep wooded valley which tumbles towards the River Avon, to the east facing the plains of Wiltshire.

The two landscapes are echoed in the two sides of the house. The approach has a pleasant informality; you come in past the pyramid-roofed game larder to the asymmetrical front with its hipped roofs and substantial chimneys. The house has an historic sense of complexity to it – suggesting it grew over time. But on the elevation facing the terraced garden, formality reasserts itself. Funded by the proceeds of wool and cloth mills this was intended to be a grand house. It survives as such, with its grade II listing – although it is rather eclipsed by the racing stables alongside which lend an aristocratic air to a house that never was an aristocratic seat.

‘He managed to carry on the English tradition with something added,’ wrote Harry Stuart Goodhart-Rendel, one-time RIBA president and friend of Dawber. Some of that expertise and attachment led Dawber to co-found the Campaign to Protect Rural England in 1926. But he was in no way a little Englander; he travelled across Europe, illustrating his journey with watercolours of Budapest, Rome and Venice that often made it onto his Christmas cards, and maintained a great admiration for the French architects of the day.