With a textured newbuild and reconfiguration of the original, ZMMA weaves the Gainsborough Museum into the fabric of Sudbury

The small market town of Sudbury in Suffolk, like so many equivalent towns in the East of England from the late Middle Ages, prospered from textiles – wool, weaving and later silk. This history is variously exhibited by its buildings – narrow streets of timber framed houses, a marketplace surrounded by Georgian townhouses, an 1820 Neoclassical town hall and 20th century factories tucked in between. The town sits in a low-lying valley of the River Stour, half surrounded by water meadows, which you cross when arriving by train.

The Stour, of course, is synonymous with the painter John Constable (1776-1837). However, in Sudbury, Thomas Gainsborough (1727-1788) is the painter of fame. He was born and raised there, the son of a merchant and lived there briefly between 1746-1752 before moving to Ipswich, then Bath and London where he became the go-to portrait painter. 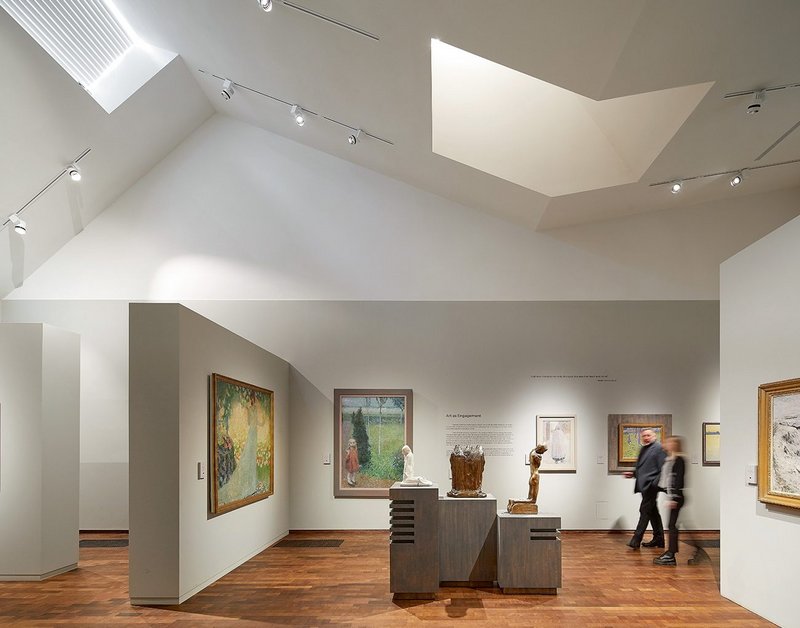 The landscapes that surround Sudbury inspired some of his most famous works, notably Mr and Mrs Andrews (1750) which Gainsborough painted at the age of 23 and features a double portrait of the newly married couple under a tree in a rolling landscape. Sudbury’s All Saints Church is in the middle background. This is the widest landscape in Gainsborough’s portraits, but it helped establish a genre for his work, with sitters typically set in rural English scenes. These works were subsequently an inspiration for Constable too.

Today, on paper, Sudbury has all the qualities of an attractive place. Its success has ebbed and flowed, with what was perhaps a lower-key period recently.

But, if things go to plan, that could change. In 1961, the Gainsborough House Society ran a local and national appeal to buy the artist’s childhood home and establish it as a museum to him. It had no permanent collection. People were encouraged to donate or lend works of art, furniture and objects to furnish the house. The museum was largely confined to what was left of the house and garden until 2006, when a £1 million programme refurbished the house and acquired several outbuildings along Weavers Lane, which borders the east of the garden. The visitor entrance was moved to an outbuilding and a lift inserted to make more of the house accessible.

What was missing from this project, however, was the capacity and space for the museum to become a centre of significance on Gainsborough and art in general. The museum had collected some of his major works, but these were often painted for clients with more stately homes. It lacked the facilities, room sizes and heights to exhibit them appropriately.

These are the motivations behind ZMMA’s £10 million visitor centre and house refurbishment, which has moved the entrance still further up Weavers Lane into a 615m² red brick building. In 2018, the local authority acquired a former 1930s labour exchange at the far north-eastern corner of the museum’s garden. The scheme reorients and empowers the museum with new galleries, learning spaces, its first café, a printing workshop and greater accessibility. It is the biggest investment since the museum opened. Five million pounds came from the National Lottery Heritage Fund alone.

Arriving at the museum, you pass the front door of Gainsborough’s house sandwiched between buildings on Gainsborough Street, and progress along Weavers Lane. On the corner is a gift and bookshop, located in a former silk factory on lease to the museum. Further along is the café in an outbuilding, then the printing workshop in another. At the end of the row, visitors are greeted by a 30m-long contemporary crinkling building clad using special terracotta bricks designed in a woven effect. This volume sits on top of, and further up the street wraps around, a knapped flint ground level with Corten fins, so the new building appears to incorporate an existing garden wall. The roof peaks at this southern end, jagging down from three stories to one to the north like the diminishing point in a perspective. This elevation has  three windows punched deep into the facade. Floating above on the south elevation, however, a huge flat window reflects the sky like a mirror.

The entrance, a glazed opening, sits between two of the uprights in the flint wall. Inside, a deliberate material richness unfolds. The floor is in-situ terrazzo, the reception joinery is in undulating light oak and the walls are finished using smoked oak panelling. The stair has a balustrade crafted in steel to resemble the zigzag of threads being woven on a loom. To the left of the entrance is the new Gainsborough Gallery. At 66m² and 3.8m tall, this is the showpiece, specifically designed to exhibit the large Gainsborough paintings that could not be accommodated before. It is designed to replicate the proportions of the homes where Gainsborough’s paintings would once have hanged – the walls are lined in silk damask, tall oak skirting curves to meet the block oak floor. ‘The silk gallery,’ explains ZMMA’s Adam Zombory-Moldovan, ‘is not daylit on purpose. It has a different atmosphere. The idea was to make it an arresting space that encourages a total focus on the paintings and is inward looking.’

This contrasts with the 120m² Timothy & Mary Clode Gallery temporary exhibition space on the opposite side of the hall. This is a contemporary gallery with white walls. The ceiling reaches to the sawtooth roof and brings in daylight via large skylights on each north face.

Back on the stairs, on the first floor is a further small exhibition room. Up again is the Landscape Studio – a multi-purpose space designed to accommodate lectures, events and learning programmes with its own camera obscura. There, a picture window allows visitors the primary view from the new building towards the original house, garden and the 400-year-old mulberry tree that Gainsborough would have known, at a fantastic 3D aerial perspective. More importantly, the building’s height at this level enables the house to be seen in its landscape – abutted by the town’s cottages and terraced houses in the foreground, higher ground countryside beyond – as if recreating one of Gainsborough’s paintings with the building as its subject/sitter.

In the main house, which is accessed via a lobby beyond the Gainsborough Gallery and through the garden past the café, the objective has been to tell a curatorial story of Gainsborough and the museum. The bowed room at the rear which would not have been present in Gainsborough’s time, has been reappropriated as an artists’ studio, including artefacts that Gainsborough would have used, alongside his original painting table. To the front of the house, in what are thought to be 16th century rooms, is a gallery dedicated to the local artist Cedric Morris, and a room showcasing Gainsborough’s smaller early works. Likewise, a music room upstairs includes three portraits of musicians by Gainsborough, a room for Constable’s works, and there is a gallery about Sudbury’s silk weaving history and on the top floor a drawings gallery has a show about abolitionist Ignatius Sancho.

The whole ensemble mixes the genres of house museum and art gallery. Its refurbishment aims to retain as much as possible, including split floorboards, while removing additions like brass picture rails. Wall colours are not historically accurate but selected to create a setting – blush pink in the Cedric Morris gallery, vivid mid green in the Music Room. Another aspect of the project included making the ground floor level-access from the rear, which was achieved by widening the opening to the studio and dropping the floor by a step. 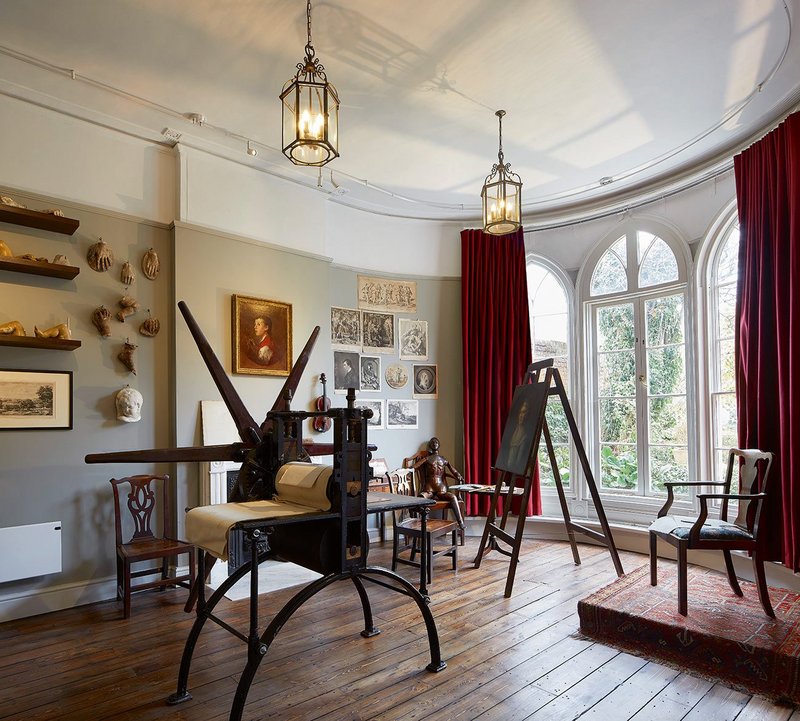 Many artefacts Gainsborough would have used for his work are displayed in the recreated garden-facing painting studio. Credit: Hufton + Crow

Countless house museums in Britain are reinventing themselves by commissioning new additions like this one in Suffolk. ZMMA had several projects at Watts’ Gallery in Guildford. Others include BDP’s extension of Leighton House  and Hugh Broughton at the Henry Moore Studios & Garden (2018). There has been a such proliferation that one wonders whether this is becoming a curiously British type of architectural project. Journalists visit from all over Europe. Sometimes this raises a question of whether they can all – certainly those that are more geographically remote – succeed. That this project reassures is perhaps down to the fact that it is a recreated home – Gainsborough had not just put down his tools when the museum took over. The large new building does this in a way that is contextual and appropriate; even the bricks and flint are sourced from within five miles. This reincarnation project creates a sequence of buildings and spaces that is a significant and hugely enhanced monument to Gainsborough, one that is world-class and deserves international visitors to both it and Sudbury, which just so happens to be in his former home.