Bay View, near the city of Mountain View in Silicon Valley at the southern end of San Francisco Bay, is Google’s first purpose-built workplace campus. The tech firm has multiple projects under way, including the King’s Cross London campus which is under construction, but until this year it had never built and completed an office from scratch. Bay View, a trio of buildings set in 17ha of previously brownfield land on the edge of a creek, is the first of two phases in California to finish. The second, at Charleston East, is just along the coast on the opposite side of the NASA Ames Research Center. Together they form Google’s worldwide headquarters.

Designed by Heatherwick Studio and BIG as part of a 50:50 split collaboration put together by Google following its invited competition, the Bay View project purports to have ‘three of the most sustainable workplace buildings in the world’. Its environmental credentials centre on maximising renewable energy generation and minimising energy and water demands, as well as, more unusually, restoring the natural and wildlife habitat of the site and this section of the bay. These themes are led by what Heatherwick Studio project architect and RIBAJ Rising Star Eliot Postma describes as ‘earth, rain and sun’. 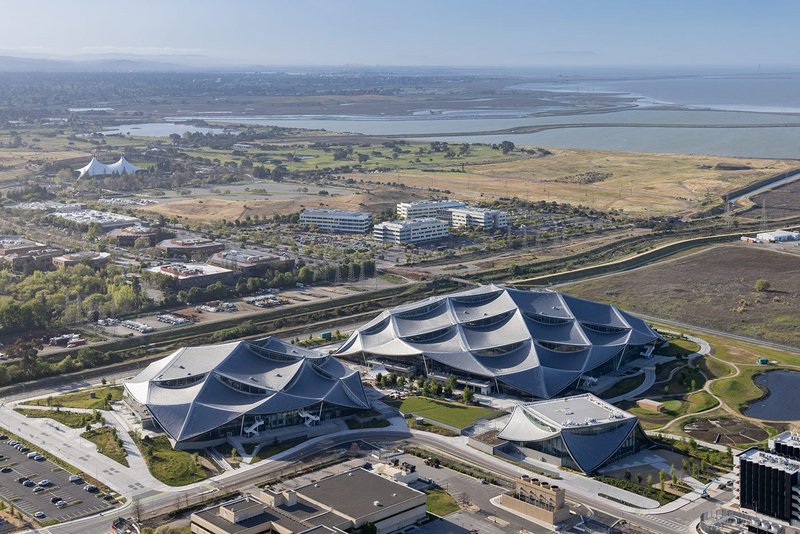 First though, the project is inspired by Google’s core ethos that ‘focus on the user and all else will follow’ and ‘a human-centred philosophy rather than a fixed aesthetic’. This saw the project evolve into a cluster of three buildings towards the urban end of the site, away from the water, set in a landscaped park. The two larger volumes contain the workspace and offices, while the smaller building is an events and conferencing facility. The buildings appear as giant funfair tent-like forms with artfully scalloped, propped-up tensile roofs. This idea emerged during one of Heatherwick’s and BIG’s first joint visits to meet the client for intense design workshops after their appointment. ‘It was on a visit inside NASA’s 1933 airship Hangar One next door that we realised this was what Google needed,’ explains Postma. ‘The vast space and structure seemed like playground of possibilities – something that could evolve quickly and be fit for purpose in 10-15 years’ time, but also in 50.’

Consequently, Bay View’s buildings are conceived as enormous cloaks. Imagine a double SIM City grid like a table of activity, components and structures draped by an enveloping veil simply for shelter. Underneath it, elements can be added, taken away, moved and changed according to the users’ needs while the roof stays untouched and still.

‘Google has been shaping workplaces for 20 years,’ says Postma. ‘It has  precipitated a move to social, collaborative, joyful workspaces. The design considers what people need as individuals and as teams… The building works across scales so and so anyone can find a place in this series of communities. Workspace set-ups can be reorganised and rearranged spatially over as little as a weekend.’

The building operates like a small, enclosed town laid out as a map of interconnected neighbourhoods of 40-80 people. Team working spaces are on the first floor; communal facilities like food and coffee outlets are at ground level. Each has its own courtyard with its own identity that visually links the two levels. There are some fixed elements, but they can be easily adapted. Then there are different sequences of circulation routes; main avenues down to narrow lanes and internal passageways.

More broadly, the whole site connects to expanded publicly accessible trails and cycle routes all around the site along the bay, giving people new views of the creek and encouraging more sustainable ways to get to work – rather than the typical American model of an office surrounded by car parking. The scheme has widened its remit by seeking to recreate an almost-vanished thriving ecology in the South Bay area by restoring 3ha of high-value natural meadow, woodland and scrubland habitats – this is the ‘earth’ part of the project and partially how it aims to be, as Postma describes, ‘a good sustainable neighbour’.

The other two themes of ‘rain’ and ‘sun’ work more symbiotically, and the scalloped canopy roof is integral to this part of the design. The canopy is a lightweight rigid catenary structure that is carefully designed to balance solid and glazed areas for optimal lighting conditions and solar gain/shading. Huge columns aligned with the courtyards below carry the canopy, with the tension between columns adjusted to peel back and create undulating wave forms that expose clerestory windows.

The bowl-like nature of each square in the roof has a two-fold purpose. First, it acts as a giant rainwater harvesting facility for water reuse and conservation. Seven million gallons of stormwater can be stored in the retention ponds across the site’s landscaping, creating habitats for flora and fauna, or in underground tanks. The project can meet all its demand for non-potable water through these mechanisms via on-site water treatment, and treat additional wastewater for its neighbours. Secondly, the canopy is made from 50,000 silver dragon scale-like photovoltaic panels. These are optimised by the size of the building’s footprint and the roof’s sweeping forms to harvest energy from the sun all day – particularly in late afternoon. This generates 7MW of power, 4MW of which is used by Bay View. That amounts to 40% of the energy demands of the site, and is in turn equivalent to powering 2300 homes. It is tall enough inside the canopy for natural hot air ventilation, which is 100% outside air. The final sustainability plank is the installation of the largest geothermal pile in North America, with 100 miles of piping. These additions eliminate the need for water-hungry cooling towers, and help reduce carbon emissions by 48% and water usage by 90% (or 5 million gallons annually). The goal for the project is to operate every hour of every day on carbon-free energy by 2030.

Consequently, although sustainability hasn’t previously been a major feature of the Silicon Valley offices that have popularised the social side of the workplace across the world, this project works adds a new layer by showing that a more environmentally responsible model for office development is possible in the US. It will be interesting to see how the same collaboration between Heatherwick Studio and BIG achieves similar credentials at their project for Google in King’s Cross, London – albeit in an extremely different urban context.

Certification The site is expected to achieve a LEED-NC v4 Platinum certification and be the largest facility ever to attain the International Living Future Institute (ILFI) Living Building Challenge (LBC) Water Petal Certification.