Step back from the hospice and you see, perched at bedroom windows, bird feeders. Those staying here may have the strength to go out into the garden and walk around the small pond but their main view is likely to be from the bed or easy chair. Here they will hear reeds rustling and water trickling into the hollow that the hospice sits in or, on my visit, rain cascading musically off gutters into raised pools. And they’ll see the feeders, placed by loving relatives, that in better weather bring lively visitors to animate the scene.

St Michael’s Hospice in Hereford started out on this convent site with a curving 1980s building under a deep pitched roof. But it outgrew this both in demand – it serves Herefordshire and its surrounding counties – and medical need. Architype, based just outside the city, has designed a new limb for the hospice, each room on it facing out to the landscape. In a second phase of work it has reconfigured the existing buildings, including digging down into them on this sloping site, to provide extra day care services and outpatient services and training.

The hospice movement has been bringing care and delight to healthcare buildings for the last 40 years, paid for by private donations, tireless fundraising and charity, often by those who have experienced their value and nearly always by those in the local area. The hospice mission to give people a ‘good death’ and better end of life care often encompasses the widest understanding of palliative. There are drugs and treatments, of course, and all the trappings of modern day healthcare, but they attempt a more holistic approach. Here rooms are set aside for physiotherapy and massage. The architecture, at its best, is understood in this context.

While working on this hospice, Architype project director Mark Barry’s own father died in another. So St Michael’s was informed by very real experiences. When Barry took me to the entrance first, to explain the importance of the threshold in a place such as this, it came from the heart. ‘People are not sure about coming in, especially the first time when it is highly emotive… often people well up,’ he says. So it has a soft approach, first sweeping you in with a long blue rendered wall then allowing a moment to pause and compose yourself under the shelter of a canopy. Similarly, once inside, the reception desk is pulled back from the entrance. Barry describes this area as the ‘gasket’ between old and new: 20 hospice bedrooms to one side, refurbished day care spaces to the other and between them a café. Running across the double height space is a bridge that joins the teams of the two sections. But it is intentionally calm with a minimum of signage. In fact you can choose to look straight through the building to the hillside beyond.

The language of the architecture is partly modern health care – the rendered wall and pragmatic border planting very much in this tradition – but inside a softer aesthetic takes over, with the timber structure lending texture to the space. The homely pitched roof of the original, and hospice supporters’ attachment to the building they had invested in only decades earlier, was one reason for refurbishing rather than clearing the site to start afresh.

Warm, tactile finishes are impressively maintained in the in-patient wing. Timber slats sweep the high ceiling up to the roof lights along the central spine which gives drama and a lightness to this high space and pulls together inevitably cellular bedrooms. The colours bring a welcoming warmth to each cluster of rooms, and along the walls panels of engineered oak have been substituted for standard issue bulbous plastic bump rails. Furniture has had the same care: surprisingly stylish chairs have been brought in that support not only patients but also the arms of their relatives as they clasp the patient’s hand in bed.

Over-bright lighting and medical paraphernalia are some of the greatest offenders to homeliness so bedroom lights are dimmable and hoist tracks recessed. One storage wall hides a multitude of mess; the hoist beam tucks into it as does its motor unit – with drugs locker, wardrobe, supply air and services – it’s a hard working wall. Avoiding the engineering clutter that comes with illness makes for a different space. The precise white of the walls was chosen in accordance with research showing how certain whites make people look more or less ill, with the aim of giving a sense of wellbeing without masking symptoms.

On plan, the bedroom wing of the building looks inefficient: rooms growing out of the spine in clusters with a complex set of walls and layers of roofs. But across the whole project the cost was a reasonable £1,690/m². And, informed by its experienced client, Architype has built a nuanced understanding of the psychology of users into the building. Previously the hospice had four single rooms plus 12 beds in three wards. Now the 20 beds each have a private room, giving privacy for drugs to be administered and wounds dressed. But to combat isolation the clusters open onto a shared lounge where tea can be made, so that visitors and patients can benefit from small moments of interaction as well as, perhaps, a release of tension.

Alcove seats in the hallway are equally based on observed behaviour. The tendency to catch the doctor as they leave the patient, to ask the most delicate questions, can leave people discussing these in a corridor. These give a place to perch, out of the way.

The old building has absorbed offices, daycare, a children’s room and education – for training West Midlands health services in palliative care. Here the programme and existing structure makes it harder to navigate than the new building. Perhaps the most successful space is the office under the eaves where the roof has been pushed out into a continuous dormer to give headroom and light. Spaces tend to be rather squeezed between new layers of insulation and ductwork and existing levels, but a large training room has been dug out, extending the buildings terraces above which take in the views.

The land St Michael’s is set in is part of its appeal – it was once owned by the neighbouring convent, itself designed by a lesser Pugin. Its new, more navigable gardens have raised beds that are easy to cultivate. Set on the side of a hill but dug in at the back thanks to a small quarry, the question was how to stop the car park – and possibly more – flooding, without spending a fortune on drainage. Instead, with Churchman Landscape Architects, the water has been turned to advantage, cascading down the steep quarry face in an energetic rill with reed-filled retaining ponds giving a dreamy softness to the views from the hospice and the surrounding accessible path. On the north side of the hospice gutters drop rainwater into giant pots to add more water and sound to the landscape, the sun reflecting ripples on the walls. Rolling hills and ranks of fruit trees carpeting the fields below bring a sense of fecundity, perhaps bittersweet to many here, but also somehow life affirming.

Patients stay 14 days on average; half die in the hospice. It is a small comfort that as the world shrinks around them, and distant views dim, they might still see a blue tit pecking at a bird feeder with their family beside them.

Form of contract / procurement: Won through design competition under a JCT SBC/2011 contract 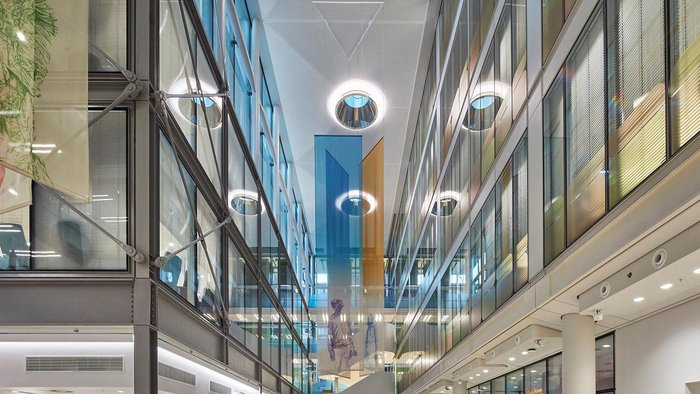 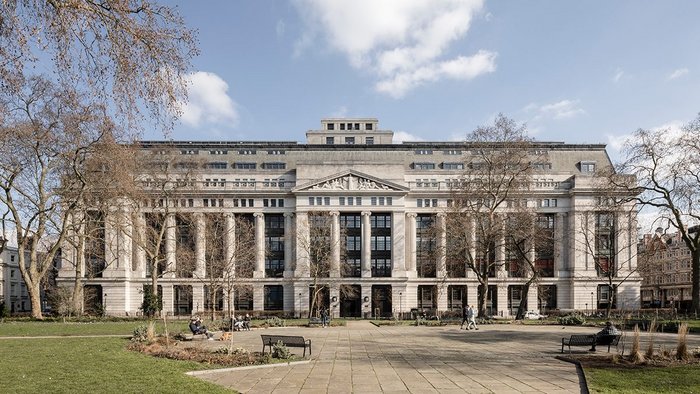