Dignity, optimism and inclusivity – Shelter from the Storm works as a homeless refuge and an estate café 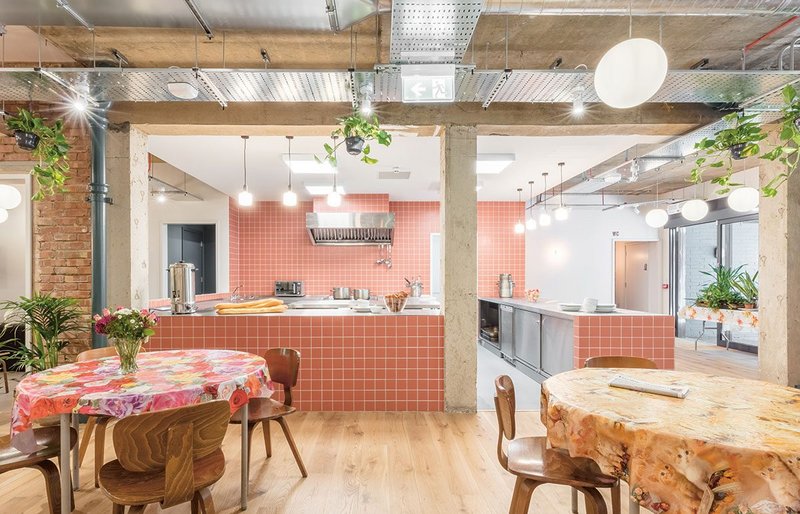 Just another hip café? No – this is the public face of an unusual homeless shelter made from an old supermarket space in a council estate.

Here’s a sobering thought: around a third of the homeless people looked after by the charity Shelter from the Storm (SFTS) at any one time are, according to its director Sheila Scott, in full time employment – but don’t have enough to pay their rent, so are evicted. Their guests – typically there for four or five weeks as they are helped to get their lives back on track – are all ages and sexes. Among their number are business people and professionals who have found themselves struggling. It’s time for most of us to reassess our stereotype idea of what a ‘homeless person’ is.

This knowledge informs the design of young architect Holland Harvey for SFTS’s new base in a north London 1970s council estate – unusually singled out by the Mac­Ewen judges for special distinction as our only ‘highly commended’ project. It’s about dignity, a non-institutional feel, optimism, and involving the surrounding community. ‘We had to understand the mindset of a person entering a shelter, as a guest, for the very first time. Sensitivity, domesticity and warmth were key to this project,’ says Jonathan Harvey. The 20-strong practice is committed to a strong strand of pro-bono work in its portfolio, preferring to use its time productively on that rather than entering long-odds competitions.

Once Islington Council had provided the site – a dark, medium-sized, former ­estate supermarket beneath a decently-built deck-access slab block – the practice had just four weeks to design and get planning approval for it, Harvey working with his colleague Chloe Anderson and SFTS clients Sheila Scott and Matt Conlon. Despite a public meeting to explain the project, this accelerated programme at first raised hackles among the neighbours, given that the site had previously been known for anti-social behaviour and given the stigma of the word ‘homeless’.

But they won through at a tumultuous planning meeting and today most of the early protestors are reconciled with this well designed and run project, and some volunteer there. It’s easy to see why. This is good design on a budget, with a kitchen and community café at its heart. The discreet supervised guest entrance at one side of the building provides a welcoming introduction and an interview room while the community café entrance at the other side (the original supermarket frontage) is inviting, even intriguing: certainly reassuring to passers-by, though this is in a lightly-trafficked pedestrian part of the estate.

The architect has made good use of its experience in commercial café and domestic projects. ‘There’s diversity in the work we do which means we have a network of consultants and clients we can call on,’ says Anderson. Indeed its introduction to SFTS came via another client, a successful bakery chain which is represented on the SFTS board.

The male and female dormitories (38 beds at present, divided into four-bed sections) are basic but good, with individual storage. There are good showers and support spaces, with the right degree of privacy afforded within what has to be a communal facility. There is training provided when necessary (lessons in English, the benefits system, healthy eating and so on), and a space for community events.

The finishes and fittings are appropriately tough, secure and safe but don’t have that look about them, and that took a lot of work and cajoling to achieve. Just getting a satisfactory timber floor rather than vinyl or linoleum was a battle they won. Offsetting the potentially chilly feel of affordable white tiles in the showers with a warm sage-green colour elsewhere was another. Exposed services and raw surfaces are softened by pendant globe lamps, furniture is mostly good second hand or transferred from SFTS’ previous premises near Camden.

Unlike those, this one is effectively permanent, which allowed the tight budget to actually be a little more generous. On top of he confidential construction cost there was a lot of gifting from suppliers on top of the pro-bono work by consultants. ‘We wandered round the Clerkenwell showrooms begging,’ recalls Harvey.

Our MacEwen judges were, as you’d hope, impressed by this example of enlightened change of use. As Kathy MacEwen put it: ‘What a great idea – it’s a community café that the homeless also use. It’s about not knowing who’s homeless or who isn’t when you’re in there.’ BDP’s Kathryn Tombling observed: ‘It’s a dignified and lovely environment to be in.’ And Cecilie Sachs Olsen added: ‘I really like it. This is a structural way of embracing rather than dealing with homelessness. It’s a much more holistic approach. Integrating and erasing boundaries, it shows a lot of care. It’s a careful and responsible ­approach.’

For Matt Conlon as a day-to-day manager of the project, it’s working. ‘Since we’ve been here, things have been so much calmer,’ he said. That is down to the thoughtful layout, where both entrances and all the communal areas can be taken in at a glance from the kitchen. From the guests’ point of view the environment feels reassuring and friendly. This is shelter in the best sense of the word. 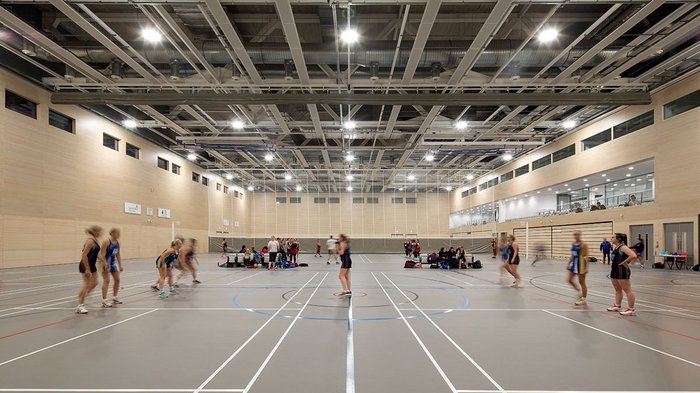