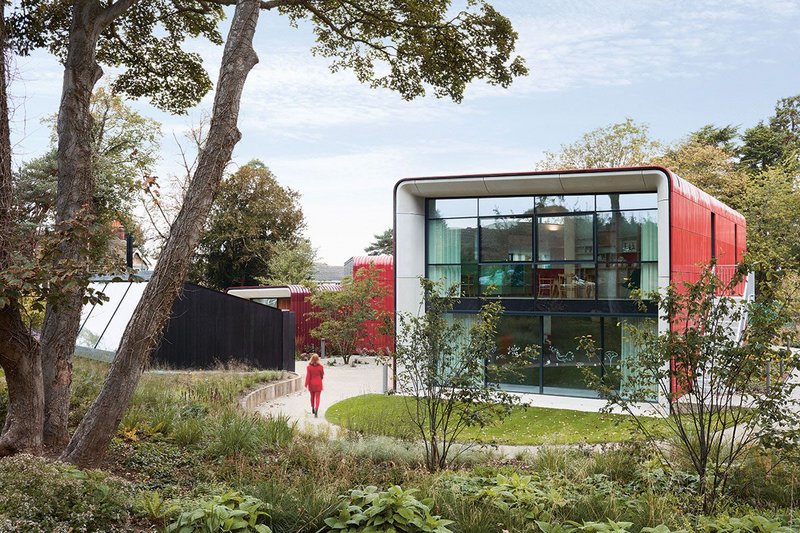 With 27 Maggie’s Centres opened since the first in Edinburgh in 1996, I’m ashamed to admit that designer Ab Rogers’ Royal Marsden centre in Sutton is the first I have visited. I’m also sad to add that my own uncle in Wiltshire, being treated for oesophageal cancer at the Bristol Royal Infirmary, hasn’t visited one at all; although I’m encouraged to hear from Maggie’s co-client Laura Lee that they are in the process of identifying a site and naming an architect at Bristol to plug the M4 cancer support gap between Swansea and Oxford.

It won’t be before time, at least from what I’ve gathered from my uncle’s experience. A three-month course of chemotherapy and radiotherapy had his children juggling their own family lives to make the regular 50-mile return trips to the hospital. Add to that the constant sickness, daily regimes of medications and the need to source appropriate food, all the while having to negotiate the ­delicate balancing act of love and guilt, responsibility and obligation. It’s a learning curve all families affected by cancer live through; and for my uncle’s it seems there’s no other guidance than information on the clinical process and implications of the treatment itself.

Sutton shows how much less stressful it can be when there’s a Maggie’s offering emotional and practical support – not only for those going through cancer, but for any­one directly affected by it. The second-hand experience of relatives goes to the core of what the charity’s about – creating an environment that lets people offload, dealing with questions and fears and offering a physical and mental breathing space to help sufferers and carers come to terms with the illness.

At Sutton, the spatial subtlety of this approach might at first be lost on the visitor. Perched on the edge of the massive Royal Marsden hospital site, and clad in multiple hues of red terracotta panels, the building seems to brightly spiral out on itself like a Catherine Wheel let off in a car park. But the Marsden is going to become a £2bn hub for cancer research and treatment – the biggest in the country – and Rogers wanted his four intersecting volumes to stand out now, while addressing their current surroundings. Not only from the bleak agglomeration of hospital blocks to the east and the generic stockbroker belt residential area to its west, but even from the future research blocks that will lord over it. This is why the bright, terracotta carapace stretches up the walls and across the building’s roof to make it Rogers’ ‘beacon-like’ object in the landscape.

And you’ve got to admire the bravura of an approach – given the therapeutic environment – that resembles meat in a butcher’s shop window; eschewing the clinical conventions of neutral, pastel shades. Rogers admits that initially some eyebrows were raised on the client side with the proposed colour when I ask if the client had asked him to ‘just make it green’. ‘We thought red was a colour you simply couldn’t shy away from. We wanted it to be, in every sense, the beating heart of the centre,’ he replies. Laura Lee reinforces the point: ‘Pale blue, green and pink might be the institutional ‘calming colours’ but after a while they can really grate,’ she says. ‘Some might say red’s about blood and trauma, but to others it’s warm, cosseting and welcoming. When you have cancer, you’re still alive and curious, and we want users to actively engage with and respond to the building; so it’s not about the colour but what you do with it.’

It’s an intention helped by the fact that Dutch plantsman Piet Oudolf was appointed to landscape the area around the new centre on space clawed back from the hospital’s oceanic parking allocation. Now his tussocks of hardy perennials stand buffeted by a wind that would have merely whistled past painted bay lines; instead dousing the centre’s vermilion in a wash of his pale green. Oudolf’s planting also frames the curious, black-painted timber ‘garden house’ that addresses the main elevation of the centre. In a first for the charity, Rogers has created a form of ‘primitive hut’, complete with wood-burning stove, built-in seating and kitchen facilities. But, says Rogers, it too is in line with the ethos as related by Maggie Keswick in her book ‘The Front Line’, where she pointed out that people confront cancer in different ways, and may use different kinds of spaces in which to do it.

This is reflected in obvious and nuanced ways in the main building too. At both levels it’s about not just the communal focus that all Maggie’s Centres share around their kitchen tables, but the interlocking volumes around this one that permit varying levels of exposure and privacy, so users can find their own levels of comfort while flowing through its openness; something based as much on the orientation of the space to the sun as on the volumes’ differing sizes. More delicately, it’s evidenced in the passive observation of the entrance, obviating the need for a reception desk where you’d ‘check-in’, or in the way the lack of signage to the loos invites a simple conversational exchange – intimating a domesticity in contrast to the formal, clinical oncology spaces across the way. Like the other Maggie’s, the plan encourages exploration, while providing immediate legibility.

I’m interested, given how much physical sickness chemotherapy can cause, in how the kitchen came to be the focus of it all, when I now know that persuading cancer patients to eat can be a constant battle. ‘The kitchen symbolises the place where conversations happen and the sense of the domestic home; it’s not necessarily about the food,’ says Lee. ‘It’s true that there’s an emotional tension around food and we’re just having those conversations in the place where the tension occurs; we’re not trying to deny the realities of the illness.’

On the day I visited, with this winter’s rare sunlight captured by the huge windows around, there was a healthy buzz to the place. There’s the press for sure, enjoying Ab Rogers’ red-themed lunch; but others too round the table and elsewhere in the space, seated quietly or engaged in their own conversations. And I’ve had mine, because the space and the organisation it houses enabled that for me. At one point I stared with Laura Lee over at that vaguely coffin-shaped shed yawning up at an angle out of Oudolf’s grasses. ‘The garden house was an interesting step for us,’ she tells me. ‘It’s black; which again, is a difficult colour – and a bit surprising. But we like being surprised, don’t we?’ 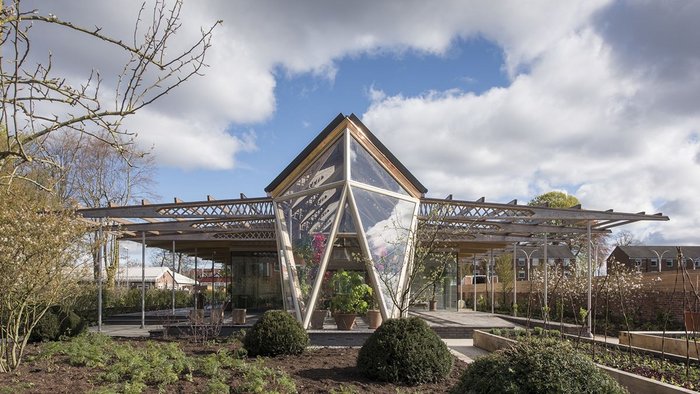 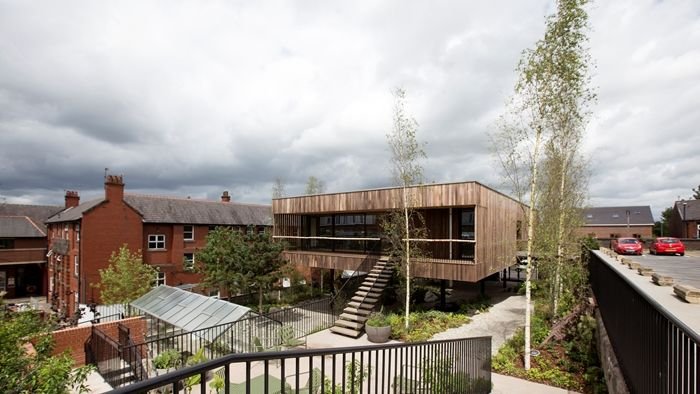 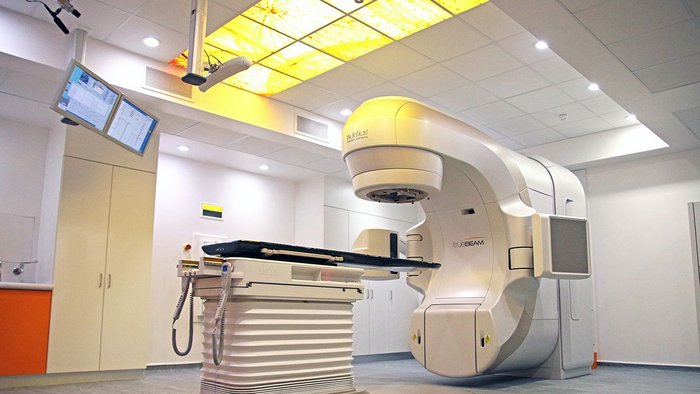